Letters to the Editor: Amit Shah visits Jammu and Kashmir 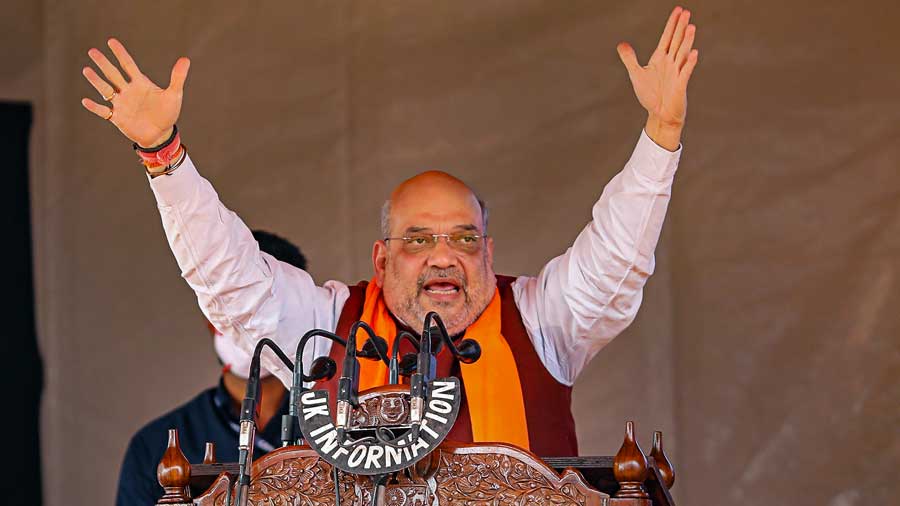 Sir — During his maiden visit to Jammu and Kashmir since the abrogation of Article 370, the Union home minister, Amit Shah, tried to woo the youth by alluring them with financial benefits (“Na bhai na: Shah”, Oct 24). Shah’s realization that the need of the hour is to bridge the trust deficit with Kashmiris is too little, too late. The Bharatiya Janata Party’s strident political posturing and autocratic policies have not won the government any friends.

So long as Delhi continues with its policy of repressing Kashmiris and fails to initiate a genuine political process, restoring normalcy in the Valley will remain a distant dream.

Sir — There are fears that journalism could be the next industry to fall prey to automation. Some news organizations recently used artificial intelligence to report on the Kandahar mosque blast. Although journalism involves reporting of dry facts, the role of emotions in this process cannot be undermined. For instance, a journalist speaking to people rendered homeless by a flood can never be replaced by the dehumanized reporting of a robot.

Sir — A Delhi court recently denied bail to Sharjeel Imam, the Jawaharlal Nehru University student arrested for allegedly instigating rioting with his ‘inflammatory speech’ (“Proof sketchy but no bail”, Oct 23). It beats reason that although there is little to no evidence of the charges brought against Imam, he was denied bail.

In a democracy, it is expected that anyone who goes to court will be treated fairly and presumed innocent until proven guilty. Further, the Supreme Court has made it clear that bail is the rule and jail the exception. But India’s lower courts refuse to get the message. How will Imam be compensated for the time he is losing in incarceration?

Sir — Even if one were to look past the fact only 30 per cent of India’s eligible population has been fully vaccinated, it cannot be forgotten that more than 4,53,000 people have lost their lives owing to the callousness of the government (“Blank noise”, Oct 22). While the prime minister falsely boasted of providing one billion vaccines for free, did he stop to recall the hundreds of migrant workers who lost their lives owing to an ill-planned lockdown or the countless children who took their own lives because they could not afford online education?

Yet, rather than apologizing for his massive failure, the prime minister took credit for feats of statistical jugglery. This is a mockery of those who have lost their lives, directly or indirectly, owing to Covid.

Sir — The prime minister’s address to the nation after one billion Covid-19 vaccines had been administered in India is not just premature but also childish. Other nations have started administering booster shots while 70 million vulnerable adults in India and most of its under-18 population remain unvaccinated. Vaccination in India is still making up for faulty policy at the start when the Centre thoughtlessly passed on the burden of procuring vaccines to the states.

Worse, the prime minister was lying when he said one billion vaccines had been provided free of cost. At the height of the vaccine shortage, some hospitals charged exorbitant sums for the vaccines. He has nothing to be proud about.

Sir — The meeting of countries with a stake in Afghanistan — with the exception of the United States of America — in Moscow is a step forward. Although no one is in a hurry to recognize the Taliban government, regional forces are eager to see peace return to Afghanistan. It is thus commendable that India has promised humanitarian aid to that country in spite of the Taliban government. If influential countries can look past their personal gains, the Afghanistan crisis might just be resolved.

Sir — The Moscow Format Consultations on Afghanistan are a cause for concern. This matter needs a careful diplomatic touch.

Sir — It is gloomy both outside and inside. An overcast sky can mess up mental health by inducing a chemical imbalance in the brain. It has been proven that on gloomy or rainy days, the brain produces very little serotonin — aka the happy hormone — making one feel unhappy or blue. This increases the possibility of seasonal affective disorder, causing fatigue, social withdrawal, hopelessness and depressive thoughts. Given that climate change is ensuring year-long monsoon-like conditions in cities like Calcutta which are close to the sea, the link between mental health and climate change needs to be explored further.