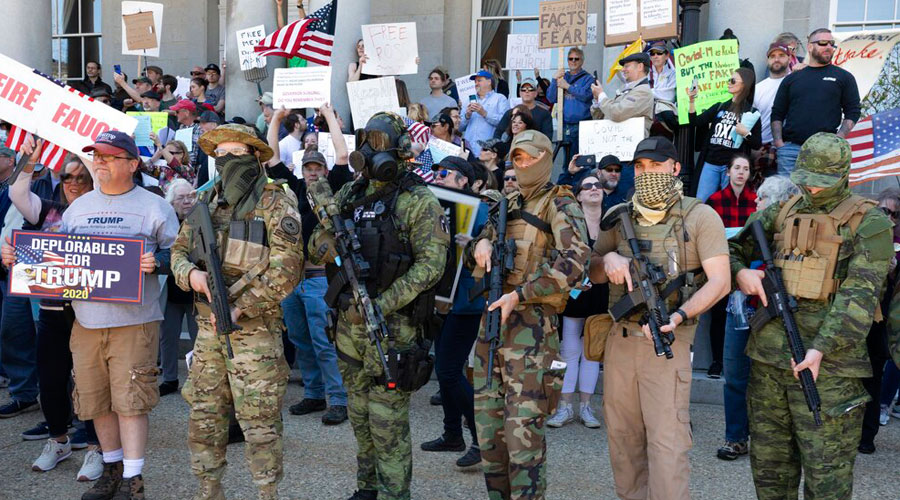 People, including those with the boogaloo movement, demonstrate against business closures due to Covid-19, at State House in Concord, N.H.
AP Photo/Michael Dwyer, File
The Telegraph   |   Published 02.07.20, 12:51 AM

Sir — In a long-overdue move, YouTube has banned the channels of notorious far-right users, including the former Ku Klux Klan leader, David Duke, and the promoter of “scientific racism”, Stefan Molyneux. Others sites such as Reddit, too, are trying to revamp their content policy while Facebook, which has been slow to take action, is facing a growing advertiser boycott. Could these sites not have taken strict action earlier? It is evident that these steps are being taken only in response to the growing Black Lives Matter movement in the wake of the brutal murder of George Floyd. Had such policies been implemented from the very beginning, much of the dissemination of hate speech could have been avoided.

Sir — The Indian government’s temporary ban on Chinese mobile apps like TikTok and WeChat, along with 57 others, on the grounds that they engage in activities that are “prejudicial to [the] sovereignty and integrity of India” has received widespread support throughout the country (“Ban on China apps an interim step”, July 1). This decision, which comes in the wake of raging tensions between the Indian and Chinese governments over the border dispute along the line of actual control at Galwan Valley, caters to the rising nationalist sentiments among Indian citizens who have called for a boycott of Chinese products and companies.

While this move is being lauded by some as a ‘digital strike’, to many others it seems like a mere act of tokenism. The ban on Chinese apps falls short of being a proportionate reaction to the crisis at hand. As a punitive measure, it is more symbolic than substantive. Economically it is unlikely to affect China. If anything, a ban on so many apps will result in many Indians losing livelihoods. TikTok alone has 600 million users in India according to one estimate, many of whom were able to generate an income from this site. The temporary ban, if made permanent, will add to the number of unemployed people in the country.

This decision also puts Indian businesses that have invested in these Chinese companies in a difficult position. They, too, stand to lose money in an already precarious economic situation. It is, however, an opportune moment for Indian tech experts and budding entrepreneurs to design similar apps for the domestic market. The government must extend support to capable engineers to help them take this step towards building a self-reliant India. If Chinese apps are permanently banned, then atmanirbharta can only be achieved if alternative measures are put in place.

Sir — The decision to temporarily ban 59 Chinese mobile apps has two-fold benefits. Not only can a digital strike be seen as a strong retaliation against the Chinese government amid ongoing tensions at the border but it can also be a crucial step towards promoting atmanirbharta by encouraging Indian engineers to replace these popular Chinese apps with creations of their own.

This is indeed a positive move, as several of the Chinese apps were programmed in such a manner that the user was left with no choice but to provide access to their personal data. One hopes that substitutes for these apps will be launched by Indian companies very soon.

Sir — It appears that the government has suddenly woken up to the bogey of Chinese apps posing a threat to national security and the sovereignty of India. The Centre is yet to adequately explain how these apps can be detrimental to public order and the security of the State. It seems that the decision was a knee-jerk reaction, pandering to popular nationalist demands without introspecting upon the ramifications of the ban.

Sir — The removal of TikTok, Weibo, WeChat and CamScanner, among others, has put many people in a fix as some of these apps had crucial functions. For instance, CamScanner was extensively used by students and working professionals to scan projects and documents. Many of them are now scrambling to find an alternative to meet their needs. While the government can consider this as a step towards an atmanirbhar Bharat, it remains to be seen whether Indian companies are able to manufacture similar apps catering to the needs of the people.

Sir — While those who had been calling for a ban on Chinese companies and products  are celebrating the Indian government’s decision to ban 59 apps, many others are scratching their heads trying to understand what the authorities hope to achieve by this step. It is crucial that the government implements concrete economic sanctions against the Chinese government at the earliest.