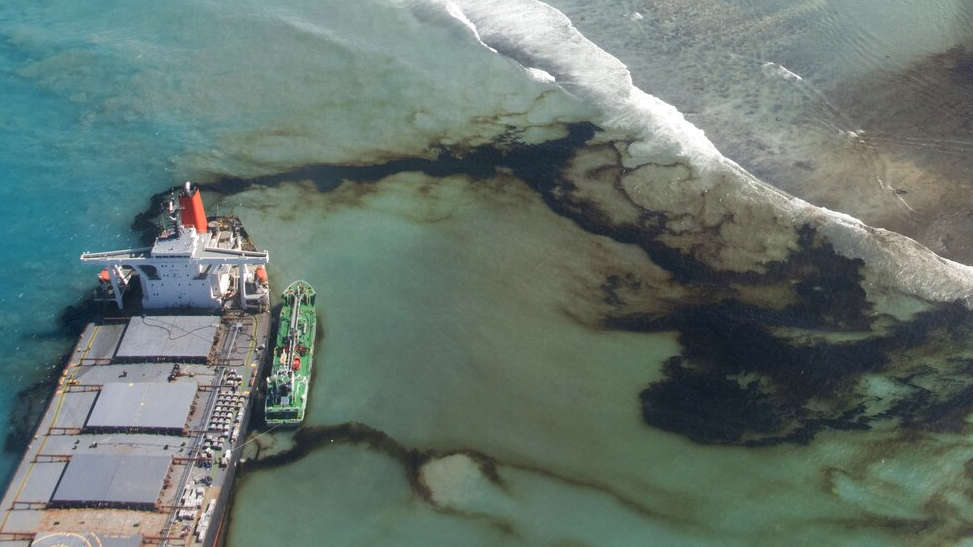 This photo provided by the French Army shows oil leaking from the MV Wakashio, a bulk carrier ship that ran aground off the southeast coast of Mauritius, Tuesday Aug.11, 2020.
Gwendoline Defente, EMAE via AP
The Editorial Board   |   Published 19.08.20, 03:25 AM

Sir — A massive oil spill on the south eastern coast of Mauritius and consequent oil seepage threatens unspoiled coral reefs and mangrove forests in a protected marine park in the Indian Ocean. Given that this is the third instance of a ship running aground in Mauritius in five years, one wonders why commercial sea routes are not planned in such a way that ecologically fragile and biologically diverse regions are avoided. Hearteningly, India has joined the effort to remove the spilled oil. After all, the global environment is common to all, and one country should not have to address such a catastrophe.

Sir — The Supreme Court’s verdict holding the advocate, Prashant Bhushan, guilty in a contempt case is disappointing (“Bhushan guilty, iron hand needed: Supreme Court, Aug 15). The apex court is known for showing greater resilience, which is why it is puzzling that it got ‘scandalized’ just by some tweets. It seems that the fine line of distinction between criticism and contempt was lost in this case.

In initiating the proceedings and convicting Bhushan for contempt of court, the bench appears to have cast aside its ‘majestic liberalism’ that the notable judge, V.R. Krishna Iyer, had referred to, and failed to reinstate the freedom of speech as the bedrock of democracy. As a free citizen, Bhushan was well within his rights to express his opinion. In fact, the views expressed in his tweets resonate with a number of people who think that in the last few years some judges could have upheld the Constitution more firmly and served the cause of justice better than they did. Some feel that on certain matters of great import, the verdicts given by the top court have adhered to the views of the ruling dispensation. Invoking the contempt law — it is but a vestige of colonial rule— cannot change people’s opinions.

The nation must make space for those who speak truth to power. All citizens cherish their freedom of expression. As such, no one should be obliged to pay obeisance to any institution, overlooking its fallibilities and failures. Even the highest echelons of the judiciary must abide by the Constitution and their own conscience. They should be able to command the respect of people on account of their high professional and moral standards. The latest verdict could now have a chilling effect on the citizenry and deter them from justifiably critiquing the functioning of the judiciary.

Sir — There is no doubt that with the Supreme Court’s decision to hold Prashant Bhushan guilty of criminal contempt for his two ‘false and malicious’ tweets, the space for bona fide criticism of the judiciary has become more restricted. This is also apparent from the bench’s assertion that Bhushan’s case needs to be tackled with an “iron hand”, lest quips like these “affect the national honour and prestige in the comity of nations”.

Many liberal democracies have decriminalized the ‘scandalizing’ of courts, based on the ideal that criticism is necessary to make the judicial system stronger and foolproof. As such, it is disappointing that the top court of India has taken a different stand. Further, it should not be forgotten that only in 2018 four Supreme Court judges came out publicly against the then Chief Justice of India in an open press meet. Was any contempt case filed or action initiated against them?

It was expected that the apex court’s verdict would be advisory in nature. The decision of the bench to come down heavily on Bhushan in view of his dissent could shake the trust of the common man in the institution which he considers to be his last resort and rescuer.

Sir — On the eve of the 74th Independence Day, the Supreme Court of India seems to have put a restriction on free speech with its verdict against Prashant Bhushan. The apex court as a public institution should be open to criticism. In fact, criticism can help strengthen such institutions. Of late, like governors forsaking their neutral position and working in favour of the ruling party at the Centre, several public institutions — starting from investigative agencies to the Reserve Bank of India — also seem to be falling in line with the government’s diktats. At such a time, the apex court’s decision to use an ‘iron hand’ to throttle dissent is all the more shocking. Surely the apex court will not punish everybody who criticizes it on social media? It must be ensured that in its 74th year of independence, India does not witness the end of liberal democracy.

Sir — The Supreme Court has been the beacon of hope for Indians, overturning wrong decisions of successive governments. One hopes that this time the court will show the strength to reconsider its own verdict against Prashant Bhushan and defend free speech.