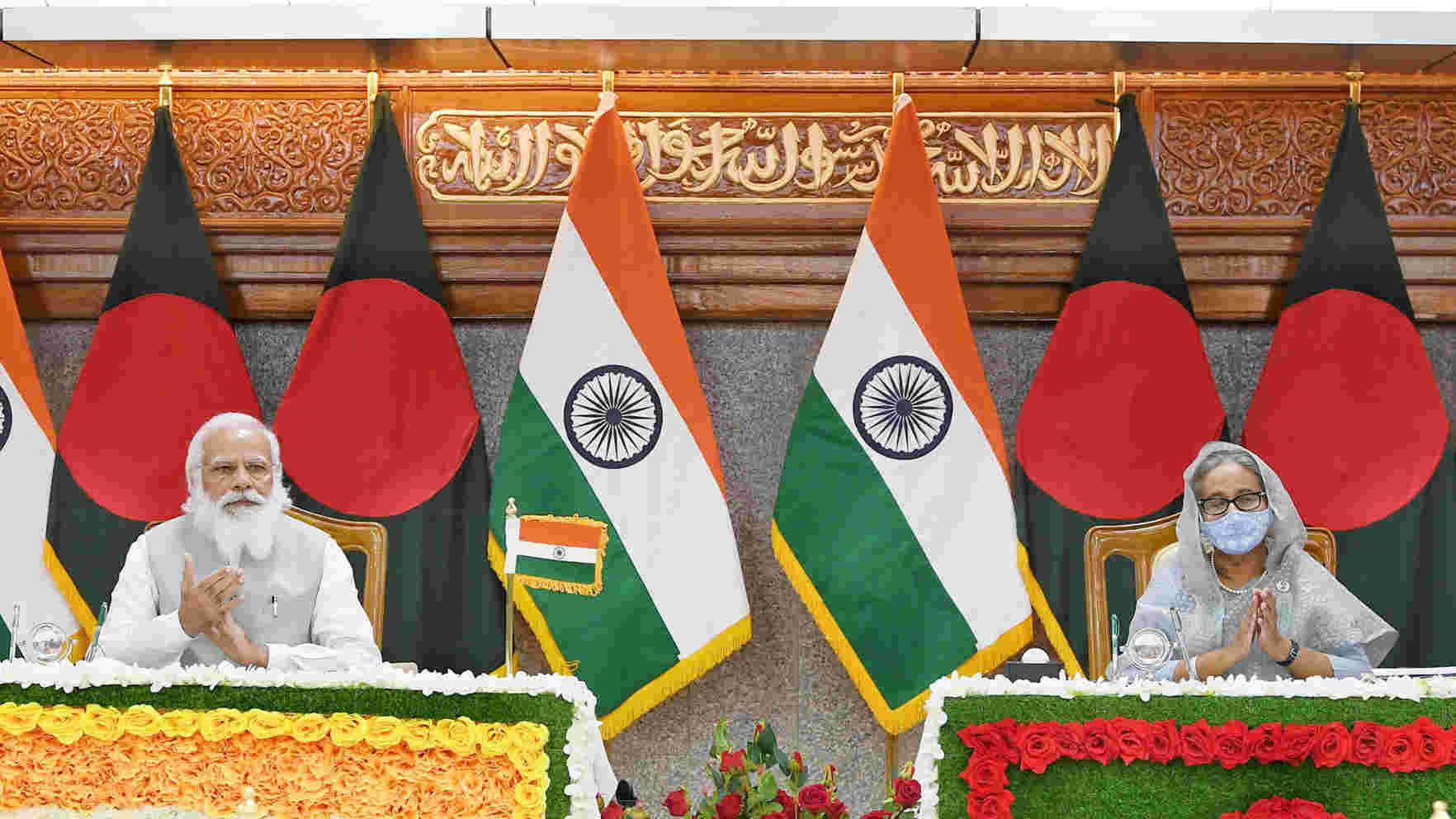 Prime Minister Narendra Modi and Prime Minister of Bangladesh Sheikh Hasina during the inauguration of the various projects in Bangladesh, in Dhaka, Saturday, March 27, 2021.
PTI
The Telegraph   |     |   Published 29.03.21, 12:27 AM

Sir — The Indian prime minister’s visit to Bangladesh to commemorate the 50th Independence Day of the country was timely. This trip was crucial to cement the bond between India and Bangladesh, which has, in recent times, bent towards China when it comes to bilateral trade. This, the Indian prime minister realized, was not good for the country’s interests. More so given the pandemic-induced dip in the economy.

The revival of trade ties is a necessity at this juncture. India must address the bottlenecks in trade relations. In this context, the message delivered by the former prime minister, Manmohan Singh, should be heeded (“Friends in deed”, March 27). There are many practical obstacles in the path to better ties between India and Bangladesh that are seldom addressed in diplomatic missions. These need to be resolved if the approximately 9.5 billion dollar trade relations between India and Bangladesh is to be improved. Narendra Modi has the responsibility of increasing India’s market share in Bangladesh so that China cannot capture any more ground in Bangladesh than it already has.

Sir — India and Bangladesh observed the anniversary of the defeat of Pakistani forces in the war of 1971. The first foreign visit of the prime minister, Narendra Modi, amid the Covid-19 pandemic to Bangladesh indicates India’s firm support for Prime Minister Sheikh Hasina Wajed. There is a very special significance to this visit as 2021 is the 50th year of Bangladesh’s independence as well as the 50th year of diplomatic relations with India, besides the centenary celebrations of Sheikh Mujibur Rahman’s birth. An enormous reserve of goodwill for India exists in Bangladesh for both historical reasons and the strong cross-border linguistic and cultural links shared by the two countries. But New Delhi needs to stop taking this goodwill for granted. Controversial references to Bangladesh and its people in domestic discourse by senior members of the Bharatiya Janata Party, particularly during elections and after the introduction of the Citizenship (Amendment) Act, have cast shadows on its ties with India.

But last year’s Dhaka visit of the foreign secretary, Harsh Vardhan Shringla, and the participation of a Bangladesh army contingent in the Republic Day parade this year were the first signs of damage control after months of false steps. India also sent two million vaccine doses to Bangladesh, the largest consignment sent to any country abroad. But the Teesta water-sharing fiasco has certainly been a major foreign policy failure.

Bangladesh is at present basking in a new self-confidence because of its spectacular economic performance even during the pandemic. Its social welfare indicators are better than even India’s on some counts. It does not bode well for India that the home ministry has chosen this moment to start rounding up Rohingya refugees for “deportation”. The government needs to be constantly mindful of the significance of this year to its relationship with Bangladesh. It is all too easy to lose track and pave the way for China to make serious inroads in the region.

Sir — Each neighbour is important for political, cultural, economic and security reasons. If there is one neighbour where all of these interests converge for India, it is Bangladesh. The future of India’s Act East policy, stability and development in the Northeast, economic integration in the larger region, climate crisis, cross-border migration of people, and peace and security are contingent on its ties with Dhaka.
Over the past decade, one of the undisputed successes of India’s neighbourhood policy is its relationship with Bangladesh. A lot of credit for this goes to the prime minister of Bangladesh, Sheikh Hasina Wajed, and her clear strategic outlook — she has respected India’s security needs, and in turn, New Delhi has backed her, even at the cost of turning a blind eye to Bangladesh’s democratic backslide occasionally.
There has also been continuity in maintaining these ties from Manmohan Singh to Narendra Modi, who is visiting Bangladesh to commemorate the 50th anniversary of the Liberation War and 101th birth anniversary of Sheikh Mujibur Rahman. Some niggling problems that mar this relationship are the inability to seal the Teesta water sharing deal and Beijing’s increased influence over Bangladesh. These must be resolved but the big picture remains one of enhanced cordiality and connectivity.

Sir — As per the directives of the West Bengal government, schools in the state have resumed classes for Classes IX to XII, keeping in mind the importance of students’ academic career. But why then are those pursuing higher education being given the liberty to continue their studies from the comfort of their homes while school students and teachers stand the risk of contracting Covid-19? The resurgence of Covid-19 cases has seen a number of states enforcing strict restrictions on the movement of people, with lockdowns being clamped down in certain states. Unfortunately the students of our state have become the victims of assembly elections.

It is shocking to see some political leaders brazenly campaign for the ongoing assembly elections, violating Covid-19 protocols themselves while urging the common people to tow the line. This shows the value of the lives of ordinary citizens in the eyes of the political leadership. The state government must take urgent measures to save the lives of not just students but also teachers so that they do not fall victim to the virus for no fault of their own.

Man on a mission

Sir — It is poll season in several states and, as is usual, it is raining freebies. But one independent candidate in Tamil Nadu is promising the moon — quite literally. R. Saravanan is making promises that one would ordinarily laugh at — he has assured to provide a 100-day free trip to the moon, a mini helicopter and even a snow-laden mountain to keep his constituency cool. But there is nothing funny about Saravanan’s intention — he wants to raise awareness about the pitfalls of the freebie culture prevalent in Tamil Nadu. If he achieves his purpose, it will indeed be a task as difficult as a 100-day trip to the moon.