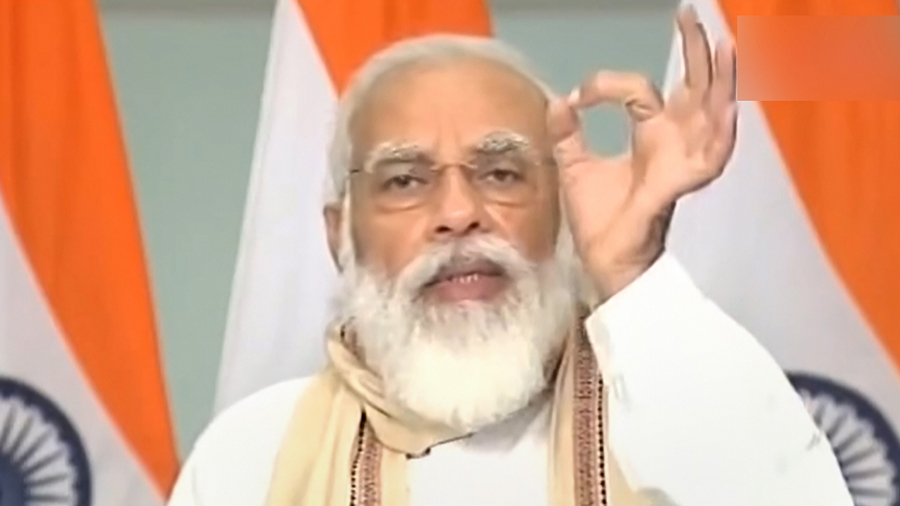 Prime Minister Narendra Modi addresses during the virtual inauguration of various railway projects in Bihar, in New Delhi, Friday, Sept. 18, 2020.
PTI
The Editorial Board   |   Published 19.09.20, 01:29 AM

Sir — The reply of the Indian prime minister, Narendra Modi, to the birthday wish tweeted to him by the actor and former supermodel, Milind Soman, would have been amusing had it not been ominous in its context. On the occasion of Modi’s 70th birthday, Soman took to Twitter to send birthday greetings and say that he wished the prime minister a “good and proactive opposition” in the hope that it would push him to do better for the country. In response, Modi said, “Thank you for your birthday wishes and wishful thinking...” Social media users and ordinary citizens have been laughing about Modi’s ‘witty’ response, but few are acknowledging the troubling implications behind such a smug reply.

It is no secret that the Opposition to the Bharatiya Janata Party in Parliament is weak. However, it is obvious from Modi’s Twitter reply that he not only knows that the Opposition poses almost no threat to him or his government, but also that he can be complacent in his handling of the nation without the fear of being held accountable. His words might have sounded funny, but they come from a leader who does not care about the people of the country.

Sir — It is clear from Narendra Modi’s Twitter reply to Milind Soman’s birthday message that the former believes his government is all-powerful and can do whatever it wants given that it has little to no opposition in Parliament. This attitude has more than amply manifested itself in the way the BJP government under Modi has been ruling the country over the past six years. Not only have lynchings increased exponentially — the victims of such attacks are mostly people who belong to the Dalit community and religious minorities — but women have become more unsafe and the state of the economy has steadily deteriorated. The Centre’s handling of the coronavirus pandemic has been the most bitter indictment of its lack of commitment towards protecting citizens. Bearing testimony to this are the massive plight of migrant workers, the deplorable state of the economy and the fact that the number of infections in India crossed one million recently. The latter indicates how stretched the healthcare infrastructure in the country is and how doctors and healthcare professionals have not received the help they needed from the government to contain the crisis.

It is heartening, however, that young people, especially those that have been rendered unemployed on account of the pandemic, are beginning to speak up vociferously against Modi and his government. One hopes that the youth can band together to bring this authoritarian government down.

Sir — The youth of India are increasingly protesting against the Central government for the unemployment crisis and several other problems that it has failed to tackle responsibly. The uncertainty about the future, especially in a pandemic-hit economy, has led to frustration, depression and anxiety in the minds of young people. Wholly responsible for this are the Narendra Modi government and its ill-planned policies. Given the grave situation, it must be asked whether the Modi government ought to be allowed to complete its second term or whether it should step down for the utter mess it has created.

Since 2014, India has steadily been going backwards. All sectors of public life are suffering. The anger of the youth might sound the death knell for this government.

Sir — It was both heart-warming and saddening to read about the farmer in Himachal Pradesh who sold his cow so that he could pay for his daughter’s online classes. The effects of the Covid-19 pandemic have hit young girls and women especially badly, with their rights and needs taking even more of a back seat than they usually do. In the light of this, it is a rare treat to hear of a person of limited means going the extra mile to keep his daughter’s education going. However, the fact that he had to sell his livestock in order to keep his child in school is indicative of the fact that ordinary people have received little or no help from the government at this time.