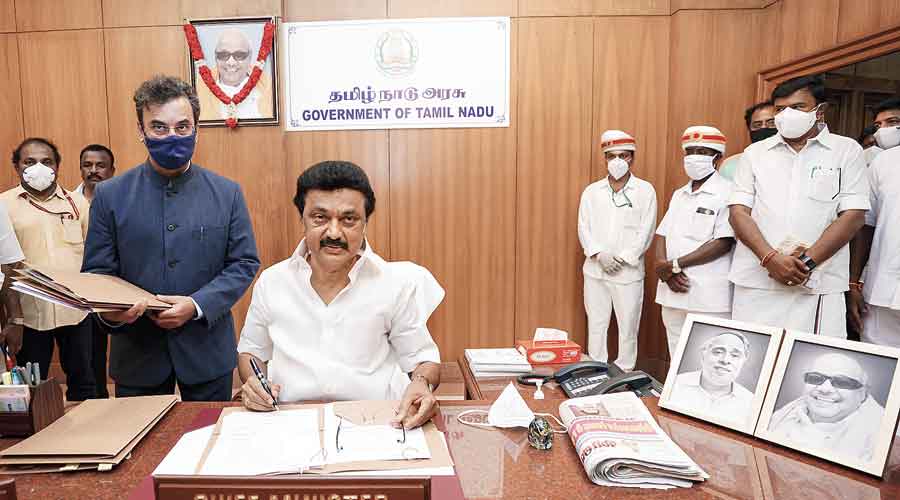 Sir — It is great to know that the new chief minister of Tamil Nadu, M.K. Stalin, has promised to provide clean, honest and transparent governance in the state, urging his cadres to resolve differences with political opponents and work with them for the betterment of the people. The new government has promised to prioritize development in the state which has been shaken to the core with the onslaught of Covid-19. At this crucial time, it does not help to dig up the failures of the previous government. The chief minister should focus on improving the healthcare amenities in Tamil Nadu so that families with Covid-19 patients can avail themselves of proper treatment. All political parties need to come together for the welfare of the common people.

Sir — The return of the Dravida Munnetra Kazhagam to power in Tamil Nadu after 10 years is a much-needed shift in the political contours of the state. However, a closer look at the tally indicates that the two Dravidian parties, the DMK and the All India Anna Dravida Munnetra Kazhagam, rule the roost, allowing little space for national players or even other regional parties to make forays among the electorate.

Significantly, while the alliance with the Congress added substantial value to the DMK-led front, for the AIADMK, its alliance with the Bharatiya Janata Party proved to be a liability. The DMK benefited from the anti-incumbency factor working against the AIADMK which had governed the state for a decade. Although the AIADMK government rolled out several welfare schemes over the years, and right before the elections even announced a 10.5 per cent quota for the Vanniyar community, these did not have much impact on the voters.

M.K. Stalin, the incumbent chief minister, knows well that his party has been elected to power in the toughest of times. Tackling the second wave of coronavirus infections in the state should be its first priority. It remains to be seen how the DMK rises up to the challenge.

Sir — Assembly elections in Tamil Nadu have always seen iconic mass leaders lead the charge for the top post in the state. This year such stalwarts were missing in the arena. However, M.K. Stalin, who is far less ostentatious, is perhaps best suited for the new generation of voters who prioritize good governance. The DMK’s return to power could bring about significant changes in the state. On the other hand, although the AIADMK has lost the elections, it still continues to hold a substantial number of seats. It is hoped that the two parties will now work in tandem for the welfare of the people of Tamil Nadu.

Sir — It is time that national parties understood that politics in Tamil Nadu is a different cup of tea altogether. The Dravidian parties, the DMK and the AIADMK, have held power in the state for decades. M.K. Stalin’s ascendancy to power was not unexpected given the anti-incumbency sentiments brewing in the southern state. It is hoped that Stalin will be able to govern Tamil Nadu better than his predecessor.

Sir — It was heart-wrenching to learn that 11 patients in the ICU ward of a government hospital in Tirupati died as a result of disruptions in oxygen supply. Such incidents have now become common. Oxygen disruption for a few minutes can be lethal for patients. It is shameful that the government can no longer ensure minimum access to healthcare.

Sir — In a shocking incident, a 23-year-old woman in Italy was mistakenly given six doses of the Pfizer vaccine. Although she was kept under observation and was given fluids, and anti-inflammatory and fever medications as preventative measures, such mistakes are jarring. While it is understandable that healthcare professionals are overworked, this is not the first time such incidents have come to the fore. Earlier a woman in India was given twice the prescribed dosage by a distracted nurse. Missteps like these could have serious repercussions on a person’s health and even lead to death.