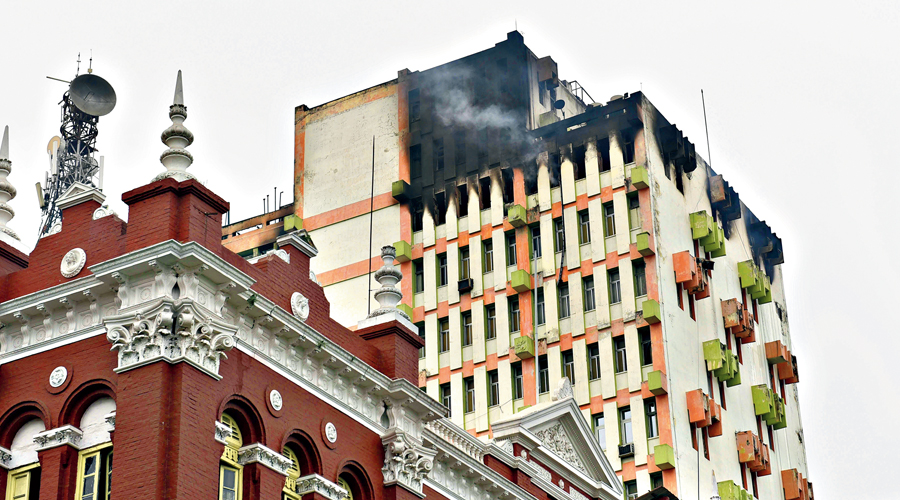 Sir — The death of nine people a few days ago in a fire that broke out in a building in Calcutta that houses offices of the Indian Railways is particularly egregious as the tragedy took place in a modern multi-storied building (“Lift tragedy in city blaze”, March 9). What is even more appalling is the blame game that is being played between the chief minister, Mamata Banerjee, and the Union railways ministry even before a probe can be conducted. Several such tragedies have taken place in Calcutta in quick succession. The inferno that broke out in the Bagbazar area earlier this year is still fresh in everyone’s mind.

The preliminary account suggests that poor attention to fire safety basics and, possibly, the absence of robust fire mitigation technologies led to the unfortunate incident. It must be investigated whether the Strand Road building met the fire safety norms prescribed in the National Building Code. According to recent data by the National Crime Records Bureau, deaths from accidental fires stood at a staggering 10,915 in 2019. There is an urgent need to remedy the situation.

Sir — It was heartbreaking to read that nine people lost their lives in the fire that broke out on the 13th floor of the New Koilaghat building on Strand Road. It is being reported that the fire started in the office space of the Eastern Railway and spread to other parts of the building.

This is not the first time that such an incident has occurred. It is shameful that we have not learnt any lessons from the past. The authorities must investigate the matter and do all they can to ensure that such accidents are prevented.

Sir — As countries begin the vaccination process in full swing, a new study has revealed that the Covid-19 vaccines produced by Moderna and Pfizer-BioNTech appear to be significantly less effective against the mutated strain of the coronavirus that was first found in South Africa. The Covid-19 vaccines, which were developed at an accelerated pace, had failed to convince many about their efficacy. Findings such as these will only reduce public confidence and discourage many from getting inoculated. It seems that it will take longer than anticipated for the situation to get back to normal.

Sir — The veteran actor, Mithun Chakraborty, recently joined the Bharatiya Janata Party in a flagrant show of publicity at a rally at the Brigade parade ground (“Mithun joins BJP with cobra quip”, March 8). Sadly, it was another act of deception and spewing of venom by an actor rather than a serious show of commitment towards politics. He quoted several threatening one-liners — “I will hit you here, and you will land in a crematorium” followed by “I am not a non-venomous snake... we are purebred cobras. One bite is enough to kill”. Such arrogant and divisive comments take the political discourse in our country to an all-time low.

It is hoped that people will respond justly to this unprovoked verbal attack through the power of the ballot. The irresponsible and threatening language used by Chakraborty may appeal to a few but it poses a serious question for the majority: how long must we tolerate politicians’ lust for power that has ruined the inclusive fabric of our nation?

Sir — The campaigning in West Bengal is undoubtedly heating up in the run-up to the 2021 assembly elections. It has now become so vitiated  that the erstwhile Bollywood actor, Mithun Chakraborty, on joining the BJP, thought it would be appropriate to liken himself to a “purebred cobra”. The Trinamul Congress and the BJP appear to be the main contenders for power. However, the alliance forged by the Left Front, the Congress and the Indian Secular Front may make unexpected gains.

More than ever, tactical voting by the different constituencies will have a bearing upon the results of the election. The 2021 polls will be an ideological battle between secularism and the forces of Hindutva. The religious connotations inherent in the BJP’s campaigning are being amplified by the indiscriminate use of ‘Jai Shri Ram’ as a war cry in a bid to polarize the voters. This election is crucial as it will decide if West Bengal remains multi-hued or turns saffron.

The prime minister, Narendra Modi, has vowed to bring about ‘asol poriborton’ or ‘real change’ in the state. So far his promises of change have led to the untold misery of the people in the country. Thus, Mamata Banerjee’s comment, “Before the election he said Ujjwala and after the election all is jumla, all is ghapla...” will resonate with the voters. The economic policies of the BJP have made daily life much more difficult for ordinary people. Such factors will play an important role in determining the outcome of the election.