A day of faith

Lessons from the death of two remarkable women 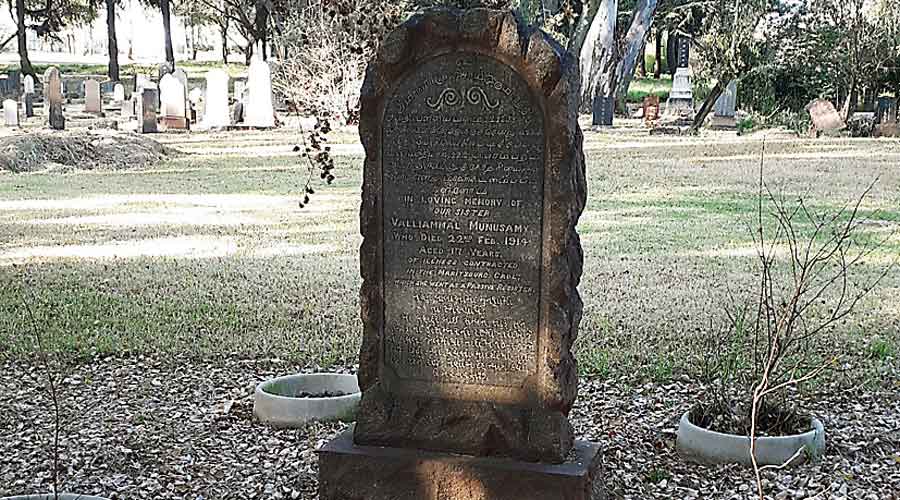 ‘Birthday’ is a standard word. But not ‘deathday’. Too inauspicious, perhaps. Too grim. But that is surely ahistorical. Some deathdays are to be celebrated for the persons who have died and the circumstances in which they have died bear out Donne’s famous lines: “Death be not proud… for those whom thou think’st thou doth overthrow die not.”

The 22nd of February — tomorrow — is the deathday of a woman who did her life proud by her death. Valliamma R. Munuswamy Mudaliar belonged to a Tamil family from the village of Thillaiyadi, now in the state’s Nagapattinam district. Her ancestors had been indentured, like several others from the Indian peninsula and even from ‘up North’, to work on plantations and in mines in South Africa.

In the early 1910s, these Indian labourers, poorly paid, uncivilly treated, without political or even civic rights, were riled by a racial poll tax — Three Pounds per head — that hurt their pride more than it hurt their purses. This, together with other disabilities like restrictions on movement between province and province and a requirement for getting registered on the basis of finger prints, was resisted by the affronted Indians who faced the consequences — stiff fines or jail. But when, on March 14, 1913, Justice Malcolm Searle, of the Cape Supreme Court, decreed every Indian marriage is invalid that is not registered before a Marriage Officer or celebrated according to Christian rites, more than pride was hurt. By a parallel order, Natal children of resident Indians or their parents were required to produce, if they needed admission in another province, certificates of birth. M.K. Gandhi memorialized the Minister for the Interior, General Smuts, to the effect that marriages celebrated according to Hindu, Muslim or Parsi rites were fully recognized by Indian law and that “it is a well-recognised fact that very few births are registered in India and it is practically impossible to produce certificates of birth except in rare cases.”

The collective selfhood of Indian-South Africans stood insulted, the honour of motherhood stood besmirched. Kasturba Gandhi asked her husband, “Then I am not your wife according to the laws of this country?” He said she was right, adding, “Our children are not our heirs.”

The community rose in a spontaneous protest. Indians, women leading, struck work and marched to break inter-province barriers to say, ‘We will not be humiliated thus.’ And they went on a great march, criss-crossing the border between the provinces of the Transvaal and Natal.

Valliamma, born in 1898 in Johannesburg, at 16 years of age, was among “the marching great” from the Transvaal side, Kasturba from the Natal side. Nearly 40,000 of them courted arrest, with nearly 10,000 being actually imprisoned, Valliamma among them. She went cheerfully and defiantly into the march and entered jail as a sense of duty to her motherland’s — India’s — greatness. Imprisoned in Maritzburg jail, she endured its rigours along with other women satyagrahis who included Kasturba. The sentence for ‘hard labour’ included the task of washing fellow prisoners’ clothes. Many fell ill, seriously ill. Valliamma, very seriously. Released when on the verge of death “with a fatal fever”, she just about managed to get back home where Gandhi came to see her.

“She was confined to bed when I saw her,” he writes in his classic, Satyagraha in South Africa. “[H]er emaciated body was a terrible thing to behold.”

“‘Valliamma, you do not regret having gone to jail?’, I asked.

“‘Regret? I am even now ready to go to jail again if I am arrested,’ said Valliamma.

“‘But what if it results in your death?’ I pursued.

“‘I do not mind it. Who would not love to die for one’s motherland?’”

Thillaiyadi Valliamma died on February 22, 1914. Her remains are interred in Braamfontein Cemetery, Johannesburg. Gandhi writes: “Valliamma will live in the history of South African Satyagrahis as long as India lives.” Her deathday is a day of celebration, for India lives! A film on the life of this icon by Sharada Ramanathan is expected to be released shortly.

Thirty years later, her jail-mate was in prison again, this time in India. Kasturba had been permitted to join her husband, imprisoned in the Aga Khan’s Palace Prison in Poona, for having heralded the Quit India resolution, asking Britain to exit from India. And she was gravely ill.

A wedding anniversary occurred at this time — that of a fellow prisoner. Kasturba asked Gandhi, “How many years have we been married?” Gandhi looked at her and said, “Why, do you also want to celebrate your anniversary?” Everyone around them laughed, Kasturba too. She was 74 that year as was her husband. They had been married for sixty one years.

On January 6, 1944, Gandhi wrote to the prison authorities: “... the patient has got into very low spirits. She despairs of life... Her state is pitiful.” And he asked for permission to be given to near and dear ones to visit her. As also for an ayurvedic physician for she had faith in that system of medicine. Her health continued to deteriorate and on February 22, 1944, her husband’s hands clasping her, Kasturba died.

She was cremated in the grounds of the prison. A tulasi plant grows on the spot in Poona.

The House of Commons was told on March 2, 1944: “... She was receiving all possible medical care and attention...” Gratefully acknowledging the fact that the regular attendants did all they could, Gandhi responded by saying the help that was asked for, when at all given, was given after a long wait, and the ayurvedic physician was permitted to attend only after he had to tell the prison authorities that if he could not procure the help that she wanted he should be separated from her as he ought not to be made a helpless witness of the agonies she was passing through.

On the Valliamma-Kasturba Deathday, the following thoughts deserve reflection:

First, a prisoner is a prisoner but a woman prisoner is a whole family in prison by proxy because of those, especially minor children, who depend on her. According to the National Crime Records Bureau’s report for 2019, of the 4.5 lakh prisoners in India today, about 3.3 lakh are ‘under-trial prisoners’. The overwhelming number of these are going to be found to be innocent. State governments which are in charge of this ‘state subject’ must, especially in our Covid-19 times, see to the urgent release of the women among the undertrials under the salutary Section 436-A of the Criminal Procedure Code introduced in the CrPC in 2005 as, essentially, a human right measure.

Second, recalling what Gandhi said in South Africa about the lack of the practice of paper documentation in Indian families, we must ask: what papers can families required to produce them to establish their citizenship in the Republic of India possibly produce? Is it right, is it fair, for some fellow-citizens to be asked to produce such paper proof?

Third, Indian women in 1913-1914 South Africa responded to the unravelling of the man-woman bond in terms of religion, a cause to which Valliamma martyred herself. Is the classification of marriages by religion, in the Republic of India, as is being sought in certain sections of our body politic, legally sound, morally right and, above all, civilizationally justifiable?

No politicians, no lawyers, no agitation-addicts but two Indian women, one from India’s western seaboard, another from its southeastern, gifted with a rare commitment and great clarity, ask for February 22, their shared deathday, to be, for Indian women in prison or in fear, to be their Faithday.