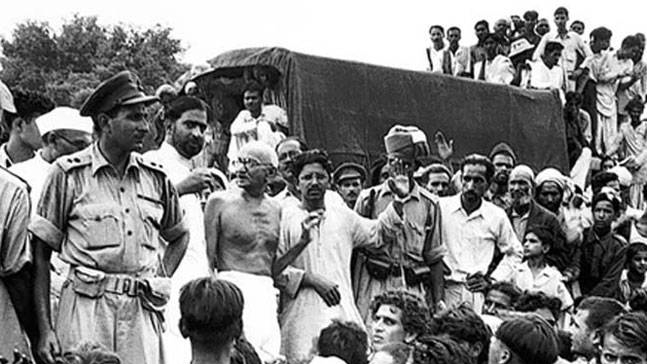 Mahatma Gandhi’s first satyagraha in India was launched in Champaran in 1917 to save farmers from the exploitation of British indigo planters — the corporates of that era engaged in contract farming. The protest bears close resemblance to the farmers’ agitation against the three farm laws that were framed without consulting farmers or other stakeholders and passed by dispensing with parliamentary scrutiny.

Sensing that the laws would cause incalculable harm to them, the protesting farmers marched to Delhi. But they were prevented from entering Delhi. The British, too, had prevented Gandhi from investigating the plight of farmers in Champaran.  He was asked to leave, subjected to coercive measures, even arrested for violating the law. Gandhi willingly submitted himself to the penalty for disobedience to resist injustice truthfully. The farmers have also submitted themselves to sufferings for the sake of their peaceful agitation. Gandhi’s admission before Champaran’s magistrate that he violated the law because he was tuned in to the higher law of conscience disarmed the British. He was allowed to identify the causes of the sufferings of farmers. After holding consultations with farmers, British planters, the colonial bureaucracy and the police, Gandhi submitted a report portraying farmers’ exploitation. The British authorities instituted a committee — Gandhi was a member — to address their grievances. The British regime responded by framing the Champaran Agrarian Bill, 1918 and referred it to the Select Committee of the Bihar-Odisha assembly for scrutiny. Even Gandhi was requested to examine it.

The committee established by the British recommended the framing of a law to put an end to farmers’ sufferings. The Supreme Court, too, has appointed a committee to be a mediator between the farmers and the government. Gandhi’s presence as a committee member had made the farmers of Champaran confident that their representative would safeguard their interests. However, the members of the committee instituted by the Supreme Court are known advocates of the farm laws. The farmers have, therefore, refused to depose before it. One member recused himself from the committee and declared his support for the agitating farmers. Unlike the British government, the Government of India refused to refer the controversial legislations to a Select Committee in spite of several members of the House moving motions to do so. The demand for the division of votes was not granted by the Chair.

Gandhi’s first satyagraha for the cause of farmers stands in sharp contrast to the passage of the three farm laws today. Pushing through legislative bills without factoring in the opinion of stakeholders as well as refusals to submit them to scrutiny on account of brute executive dominance in Parliament has become the new normal.

Gandhi had told the peasant leader, N.G. Ranga — presciently — on October 29, 1944, “If the legislature proves itself to be incapable of safeguarding kisans’ interests they will of course always have the sovereign remedy of civil disobedience and non-co-operation.” The farmers’ agitation captures the vision of Gandhi as well as the spirit of his satyagraha in Champaran. What Gandhi did in 1917 for the cause of farmers, Indian farmers are now doing for themselves.

The author served as OSD to President K.R. Narayanan