The Jaipur Literature Festival and Kochi Biennale are not only defined by the city where they are held, but in turn help define it 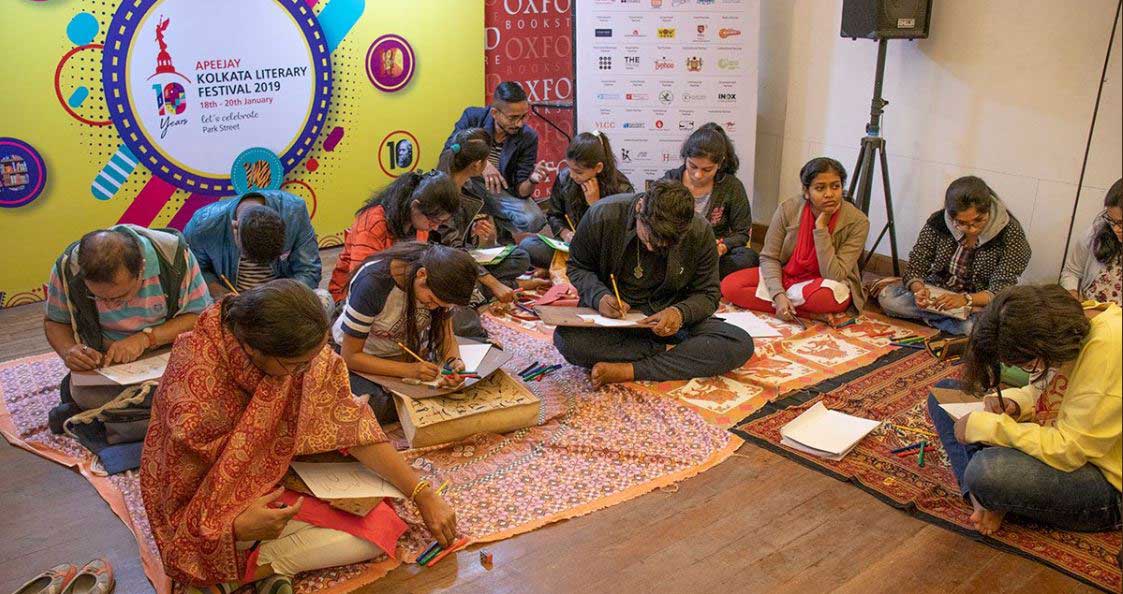 Come January comes the procession of literature festivals, with writers passing through the city, waving parsimoniously to the local faithful like cardinals on their way to a really, really big cathedral in another, far more important city. Perhaps the simile is a tad unfair — all the different sahitya utsav-melas are homegrown affairs, locally organized and Cal-centric — but it does feel like one is witnessing diverse connected parts of a whole that never quite comes together. This feeling is exacerbated by the interspersing and overlapping of a few art shows and theatre and film festivals, again like priests from another church, all greedily reaching for the few scraps of decent weather the city offers at this time of the year. Over the last few seasons, and especially this winter, the whole mixed chaos has been concurrent with the worst period of air pollution in the whole year. While there are undeniable moments of happiness, a literature session here, a cluster of films there, the odd great dance performance or classical baithak, something always seems to be missing.

There can be arguments against unnecessary homogeneity. People could reasonably suggest that two or three competing literature festivals vying for the attendance of famous and/or topically interesting authors, leading to return visits in the same month by some writers, critics and publishers, the falling off of quality in one or the other festival and the overlaps of subjects, are all par for the course and to be welcomed. Someone could insist that the khaapchhaara nature of cultural celebration in Calcutta is unique to the city, with some wisps of stuff starting in October and November, events increasing in December, gathering critical mass in January before dissipating by the end of February, and that we need do nothing to change this. Many, including myself, would welcome the fact that in most winter events there is no over-involvement of any governmental department, sparing us from having to witness the pseudo-cultural interest of various municipal, state or Central ministerial entities. And yet, and yet.

And yet, I can’t help wondering if one couldn’t do a few things differently. Just to give you a target to attack and dismantle let’s imagine a Calcutta Arts Festival that takes place every two years, that is, every alternate year. Let’s imagine this festival takes place in the years when other important biennale events like Kochi are not taking place. Let’s be seriously foolhardy and set aside a whole month or even six weeks for this festival in what is the best weather — straddling the second half of December and all of January, or starting in the first week of January and continuing till mid-February. Let’s give this event a catchy name but not one dreamt up by advertising copywriters; let’s do this undaunted by the knowledge that whatever name we give it, there will be jokes and wisecracks, both mild and obscene, around this moniker. For the purposes of this piece let’s just call it CAF (Calcutta Arts Festival)/KKU (Kolkata Kala Utsav) or CAFKKU which would obviously be rapidly decapitalized to Cafkku.

So, while Cafkku would be organized in a massive partnership between the state and Central governments, the municipal corporation and sundry private companies, it would (remember we are fantasizing here) be run by a completely and truly independent body set up for the purpose. Officials and corporate sponsors would support the festival but have no rights of interference whatsoever. On the other hand, since Cafkku was to be the city’s great pride and joy, several bold steps would be taken by the authorities to help make it a ‘world-class event’. Several public spaces would be created and ones existing would be spruced up — but tastefully, and not resembling outdoor wedding reception venues. Starting two months in advance, the traffic would be brought under control across the metropolitan area, CNG brought in with strict enforcement, several roads and areas pedestrianized, with all but the most essential motor vehicles disallowed from plying in those areas. By the time the first teams from outside started to come in, the air in the city would be palpably cleaner.

Setting up various events would be chaotic, obviously, but the problems would not be insurmountable; with all the different bodies and organizations chipping in, the artists, performers and their production teams would have the first set of events ready to go by the opening date. There would be no single inauguration, but rather a series of opening events: on the river, on the bridges, on the Maidan, at key locations in the north and south, in Salt Lake, Rajarhat and in Howrah. Music and performance events would run through the period of the festival but the first two weeks could have a stress on, say, art and public art, the next two weeks could focus on literature events and the last two weeks on connected film festivals.

Unlike what we have seen so far, Cafkku would make it a priority to be inclusive and welcoming of the most deprived sections of the city’s population. On the flip side of this, we, the city of Kolkata/Calcutta would also welcome into our streets people from all over India and the world; and again, not just wealthy tourists but a wider variety of those who might be interested in visiting Calcutta. Besides the hotels and guest houses that already exist, for the period of the festival inexpensive B&B type arrangements would be set up across the city. 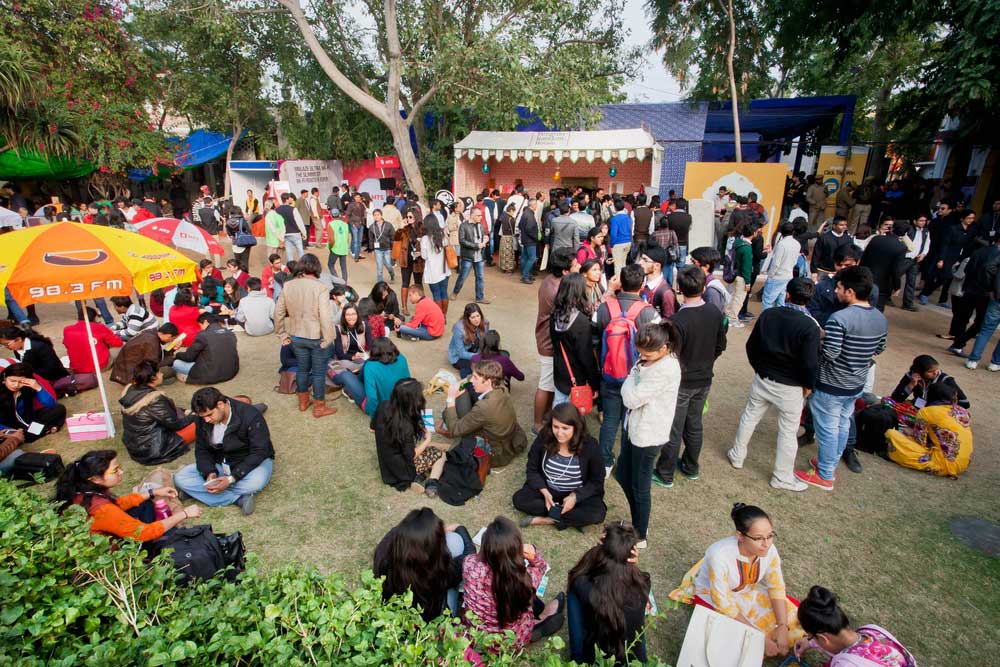 As has happened with the Jaipur Literature Festival (picture) and the Kochi Biennale, the event would be defined by the city where it took place but also in turn help define the host city itself.
Shutterstock

With each succeeding edition of Cafkku it would gain in reputation and take its rightfully regular place on the calendar of ‘must-attend’ world events. As has happened with the Jaipur Literature Festival and the Kochi Biennale, the event would be defined by the city where it took place but also in turn help define the host city itself. As time passed, synergies would build up, with other festivals, with tourism in eastern India and Bangladesh, and with local cultures of art-making, film-making, performative arts and with literature. With each edition, the citizens of Kol-Cal would also begin to see the advantages of putting in the effort, with progressive things and innovations initially brought in for the festival becoming a part and parcel of daily life. Whether it has to do with how people behave with each other, or how much space is being given (or denied) to pedestrians, or our attitude to garbage and recycling, or our awareness of where we stand in the world, Calcuttans might find Cafkku had become an indispensable part of the city’s life and calendar, an indispensable engine powering our progress to becoming not a ‘great’ city, or an ‘iconic’ one, but just a vast metropolis where life was now of a much better quality, both physically and mentally.

Coming back to reality, perhaps a month-long or a six-week-long festival is too ambitious and grandiose an idea, as is perhaps the idea of taking over the whole city or large parts of it. On the other hand, each of the great city-based festivals we know from the world over began with a dose of craziness, of zany daring, of lunatic persistence in the face of sometimes great odds. Many of them began not in the premier cities of their country but in the secondary ones, the ones with nothing to lose but their reputation as moribund places and marginal destinations. Perhaps we should recognize that Calcutta now fits this description and we need to be more daring, to take more risks, in bringing back a certain cultural electricity to our metropolis.