Defender of the faith 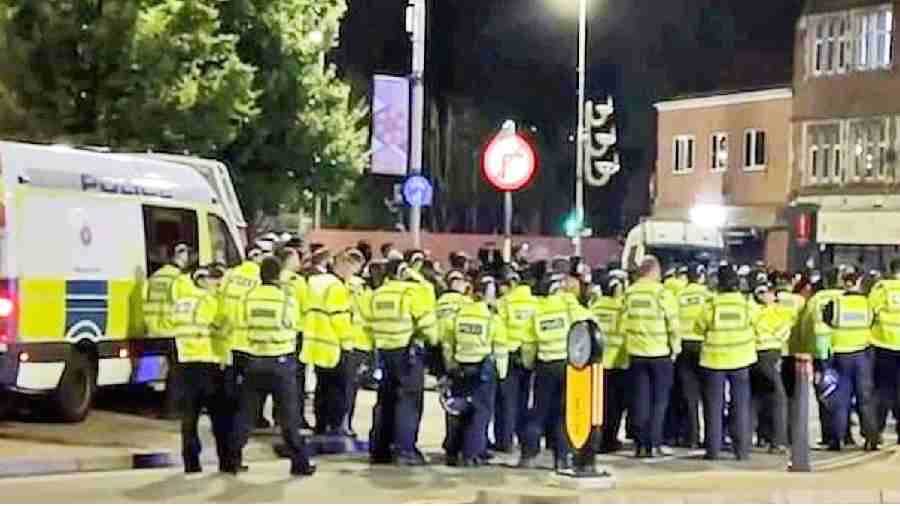 The symmetry of the responses of the Pakistani and Indian high commissions to the recent communal violence in Leicester neatly illustrates the evolution of the Indian State under the Bharatiya Janata Party. This is the first paragraph of the Pakistani statement: “It is with great concern that the High Commission of Pakistan to the UK notes the recent developments in Leicester. We strongly condemn the systematic campaign of violence and intimidation that has been unleashed against the Muslims of the area. This is not the first time such Islamophobic incidents have been reported in Leicester.”

And this is the entirety of the Indian statement: “We strongly condemn the violence perpetrated against the Indian Community in Leicester and vandalisation of premises and symbols of Hindu religion. We have strongly taken up this matter with the UK authorities and have sought immediate action against those involved in these attacks. We call on the authorities to provide protection to the affected people.”

Pakistan in the Muslim corner and India in the Hindu corner. No one in the world expects the Pakistani State to view violence of this sort through anything but a communal lens but such is the weight of India’s history as an aspirationally secular republic through the first fifty years of its existence that people still expect its missions to be neutral in matters of faith. The Muslim Council of Britain said in plaintive reproach that “... while it was the right of the Indian High Commission to speak against the desecration of Hindu symbols, it expects the mission to represent all Indians.”

You might think it’s a bit rich for a body called the Muslim Council of Britain to expect India to be even-handed in religious matters, and you’d be right. However, this quaint expectation of neutrality in the face of Narendra Modi’s frank commitment to Hindu supremacy is a tribute to the phantom afterlife of India’s founding principles. Secularism in India is the ghost that walks.

The problem with the Indian high commission’s statement is that the ‘Indian’ community in Leicester is as Muslim as it is Hindu. Leicester is a middling city in the east Midlands with a large South Asian population. The religious demography of Leicester is made up of roughly equal numbers of Muslims and Hindus.

Twenty per cent of the city’s population is estimated to be Muslim while its Hindu population is two or three percentage points behind.

Only a very small percentage of the city’s Muslim population migrated from Pakistan. The overwhelming majority of Leicester’s South Asian population consists of Hindus and Muslims who were expelled from Uganda and Kenya in the course of a decade after 1968. These were predominantly Gujarati trading communities of both faiths which had lived in East Africa for generations before being purged by Idi Amin’s bigotry. If they are to be defined as Indian in terms of their ancestral homeland, the majority of South Asians in Leicester, both Hindus and Muslims, are Indians.

For the Indian high commission to conflate Indians (thus defined) with Hindus in Leicester is to withdraw, with retrospective effect, the ancestral claim to India from the Muslims of Leicester. For the Rashtriya Swayamsevak Sangh, the parent body of the sangh parivar, this follows from first principles. Just as no Muslim can be a member of the RSS, no diasporic Indian Muslim can be allowed to have an organic claim to India. To institutionalise this bigotry, it needs to be made the common sense of the Indian State. One way of doing this is to get the Indian high commission to take the Hindu side in communal violence in a foreign country.

In South Asian countries, communal violence is mainly majoritarian violence licensed by the State. One of the interesting things about the communal violence in Leicester (to which both Hindus and Muslims contributed) is that it is a kind of natural experiment with Muslims and Hindus going at each other without the patronage and the complicity of the government. How will Hindutva evolve in the absence of an enabling State?

One answer to that question is that it might find a political patron in the Conservative Party as it woos Britain’s Hindu community for electoral and financial reasons. Priti Patel’s enthusiasm for Modi is an example of how right-wing politicians in Britain might make common cause with Hindu supremacists. Another example is Bob Blackman, the Conservative MP from Harrow East, notorious for hosting Tapan Ghosh, a Hindutva extremist, in the House of Commons.

But it’s hard to see the party of Sajid Javid and Nadhim Zahawi granting Britain’s wannabe Yogis the kind of impunity that Hindu supremacists enjoy in India today. Sadhvi Rithambara, for example, had to cancel a tour of British temples following protests against her visit. The violence in Leicester and Birmingham is mainly interesting as a way of understanding the ways in which the majoritarian State articulates its ambitions and anxieties.

The attempt to project the Indian high commission as the shield of Britain’s Hindus is part of a larger ambition to cast India as a kind of Hindu Zion. Unlike Israel, India’s Hindu majoritarians aren’t invested in persuading the diaspora to return to the motherland; they see it instead as a useful chorus for amplifying the Leader’s (and, secondarily, the sangh parivar’s) soft power. If it seems odd that Israel, home to less than six-and-a-half-million Jews, is seen as a model for India, home to a billion Hindus, that’s because it is odd, deranged even.

There is a paranoia to  Hindutva, an anxiety about Hindu valour and virility, that makes its leaders, cadre and lumpen alike behave like members of a beleaguered minority on the edge of extinction. This is evident in its nightmares about Muslim fertility and its raging campaigns against inter-religious love and marriage. The idea of the Muslim man as Romeo incarnate, the notion that some sinister sexual charisma allows Muslim men to wage love jihad, speaks to an inexplicable, almost incel, sense of inadequacy. This inadequacy can, seemingly, only be compensated for by deploying the State on behalf of Hindus. This is what the Indian high commission was trying to do, at one remove, in its sad, sarkari statement.

Ironically, the second and third paragraphs of the Pakistan high commission’s statement, minus the first bit (quoted above) moaning about Muslim victimhood, would have been the perfect response by an inclusive Indian nation to trouble within its diaspora: “The High Commission notes that the UK is a diverse and tolerant country where people hailing from all faiths and races live in harmony. The High Commission has full confidence that the British government and law enforcement authorities will thoroughly investigate the incidents and deal with the promoters and perpetrators of violence according to the law. It calls upon all communities to abide by the British laws and customs, and to refrain from actions that inflame religious sentiment and undermine societal harmony.”

But that was another country.