Man of the world 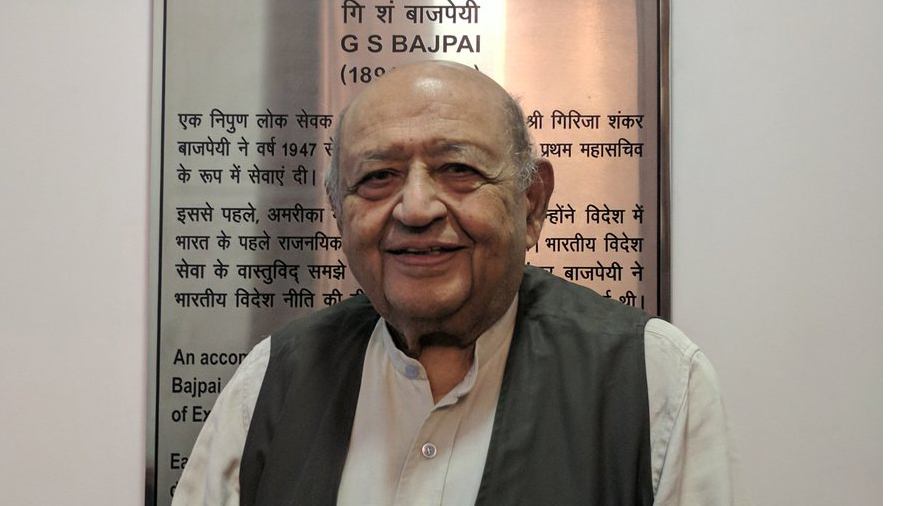 Katyayani Shankar Bajpai, the veteran diplomatist who died last Sunday, was virtually unique among high-ranking Indians in being able to disagree without being disagreeable. I could not have been more critical of his stint as India’s political officer in Gangtok from 1970 to 1974. Yet, I had to thank him for many small kindnesses. I would have been stranded in Bagdogra on one occasion if he had not instructed the India House jeep collecting the diplomatic bag from the Delhi flight to collect me too for the six-hour drive to Gangtok in a strike-bound Sikkim.

It seems blasphemous to recall an envoy to the three countries that matter most to us — Pakistan, China and the United States of America — in connection with what he himself dismissed in moments of frustration as “the Chogyal’s little bailiwick”. But looking back two years ago, when he was 90, Bajpai acknowledged in the Indian Express that the “four years in Sikkim, leading to its merger” were the “most instructive” of his career. He was a man of the world, educated in the US, Britain and Switzerland, steeped in international diplomacy, knowledgeable about classical music, period furniture and colonial art. I doubt if Indian diplomacy has produced (or can produce) another such accomplished renaissance man. But his mission in Sikkim and the obliteration of a tiny but ancient kingdom aggravated India’s relations with China. His demise coincides with a turn of the wheel when the two countries appear to be poised on the brink of an even more catastrophic confrontation. The mystery is that both crises seem utterly inexplicable.

He was consul-general in Karachi during the tensions of the 1975 war, in Tashkent with Lal Bahadur Shastri, and ambassador in Washington during Rajiv Gandhi’s crucial visit to Ronald Reagan. It was a mark of the man’s sophisticated élan that he could afford to be light-hearted about weighty responsibilities, regretting from the sprawling villa at 2700 Macomb Street that his father, Sir Girja Shankar Bajpai, had acquired for the Indian government in the Forties, that the visit was so rushed that “he barely had time to find some taragon to add to the sauce” he was whipping up for the prime minister. Cooking was a passion. He enjoyed cooking for friends, especially at times of stress. It was a matter of profound regret that his charming wife, Mira, a diplomat’s spouse to her fingertips, did not think his French onion soup matched up to what Les Halles, the 11th century fresh food market in Paris, served to late-night revellers until it was demolished (like London’s Covent Garden) in 1971. It was some consolation that a Les Halles stall-keeper attributed Mira’s preference not to her husband’s culinary inadequacy but to the market’s nocturnal ambience.

Food and wine were skills he shared with the Chogyal of Sikkim. He chided me once for not being sufficiently appreciative of the Chogyal’s recherché tastes. He was similarly respectful of the Gyalmo’s (the former Hope Cooke’s) “educated” appetites. He rubbished Indian suspicions of her alleged links with the American Central Intelligence Agency. People remember his “Shall we dance, Gyalmo, the last tango in Gangtok?” as he seized her at a party at India House. The person he could not stand was the Chogyal’s beautiful, talented and haughty sister, Coo Coo La, Princess Pema Tseuden Yapshi Pheunkhang. She was always “the dragon lady”, immune to the charms of the Last Resident who represented an imperial and imperious New Delhi that nearly deposed Gaekwad Sayajirao III of Baroda for not being sufficiently subservient at the Delhi Durbar. Representing the paramount power, he was adamant Gangtok was not a diplomatic posting but an extension of the Indian scene. Such positions made him appear to be the single-handed architect of what Britain’s liberal Guardian newspaper called “the swallowing of Sikkim”. The Observer doubted that India’s security interests were best served “by acting in a way that excites Chinese hostility and increases the suspicions of all its frontier peoples...”

Actually, China may have been more bewildered than furious. The record of a conversation between Deng Xiaoping and Henry Kissinger in Beijing on November 27, 1974 suggests both men were puzzled. Deng told Kissinger he found Indian policy “very peculiar” since Sikkim was already “entirely under the military control of India”. It was even more baffling that India did not increase its troop strength there “after the military annexation”. Kissinger didn’t understand either. “It is incomprehensible,” he said, unable to answer Deng’s question, “Why did they have to annex it?”

Over the years I tried to persuade Bajpai, last survivor of the dramatis personae of that operation, to answer that question with his insider’s authority. He promised to write. He said he was writing. He asked for a copy of my book because his was lost. He said he had drafted “something” and sent it to a foreign office mandarin. We lost touch after that but the versions in circulation were about as credible as current pledges by both sides that neither has the least intention of crossing a sacrosanct line of actual control between India and China.

The legal fiction was that the Chogyal had requested New Delhi to take over his administration. Gullible Indians were assured that annexation was the only democratic response to a popular demand. Sympathetic Westerners were told that border defence had to be consolidated against China’s military build-up in Tibet. Hints were dropped that the Chogyal was secretly in cahoots with China, his wife with the CIA. For N.N. Jha, a former lieutenant-governor of the Andaman and Nicobar Islands, the Chogyal’s meeting with the Chinese ambassador at King Birendra’s coronation in Kathmandu was the last straw. He reported it to New Delhi. It wasn’t a mere ambassador the Chogyal met: what cooked his goose, according to P.N. Dhar, Indira Gandhi’s principal secretary, was an encounter with China’s vice-premier, Chin-hsi Liu.

Perhaps that’s what Bajpai had in mind as we strolled through the National Palace Museum during a visit to Taiwan in 1990. “Do you really think we could have allowed the Chogyal to get away with things?” he suddenly blurted out amidst the museum’s artefacts, apropos of nothing and without elaborating what dreadful “things” the monarch tried to get away with.

We know that the sombre figure of R.N. Kao loomed in the background. We do not know if the Research and Analysis Wing acted on Gandhi’s orders or decided on its own (like some US spy agencies) to draw up a takeover blueprint and present it to her. If it was the first, Gandhi’s reasons for changing from warm friendliness to implacable hostility should be explored. If the second, the threat perception that prompted RAW bears examination. But whatever the motivation, and whatever instructions went out to Gangtok, nothing would have been accomplished without the Last Resident’s unflinching sense of purpose. Adapting Marshall McLuhan, the messenger became the message.

Was his dedication rewarded? By all accounts his last posting as ambassador to the US came to a bungled end. The ultimate plum of foreign secretary eluded him. The tragedy of catching Covid-19 in hospital bore out his own bleak assessment of India’s administration. Warning in his Indian Express article that India faced more problems than it was even aware of, with the government quite unaware of the deficiencies of the mechanisms it had devised to serve its needs, Bajpai quoted Mohammed Iqbal’s warning, “Na samjho ge tho mitt jao ge, Hindustan walo, tumhari daastan bhi na rahegi daastaon mein (roughly translated: If you fail to understand, Indians, you will be erased, even your history will not remain part of history).” Like Sikkim.