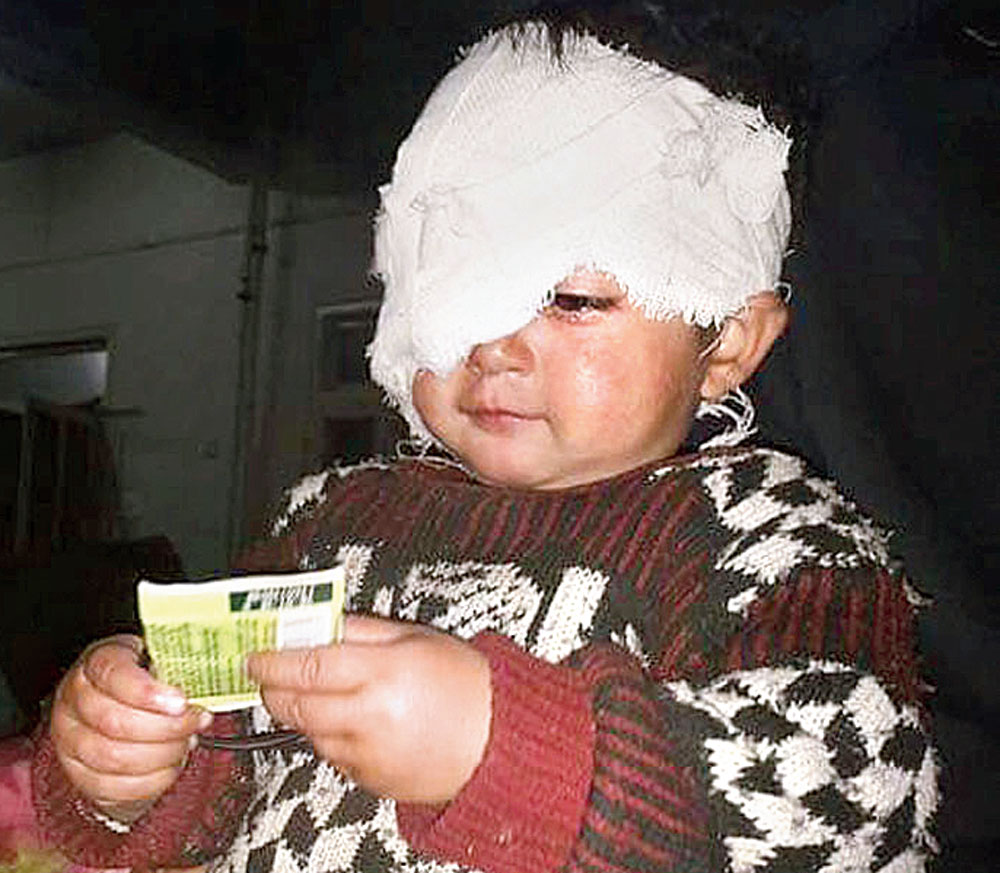 Part of the rites of area domination in the past month was 19-month-old Hiba Nisar, who underwent surgery for a pellet-hole in her right pupil, and three Kashmiri youngsters done to death, one of them by dagger or by sword run across his throat
(PTI)
Sankarshan Thakur   |   Published 05.12.18, 03:17 AM

Area domination is a term that comes with easy disconcert to folks in militarised, conflict-ridden zones — a daily, cloying intimacy, a shadow that won’t go away for any amount of shrugging. Kashmir is an area domination domain, probably, and wretchedly, our premier showcase of it — a sundered, splintered, plundered, barb-fenced, barrel-ridden, risked, fisted, rebuked, bludgeoned, bleeding, weeping geography trodden over by the hob-nailed heel of one ownership or another. Kashmir, a possession so precious it has to be had to destruction. Area domination — that’s first, middle and last name for Kashmir, you might almost want to spell Kashmir that way.

Through centuries, that’s been the story of Kashmir, the story of heckled, and often brutal, area domination: Mughals, Afghans, Sikhs, Dogras, even the British through sleight of their residency in the Dogra courts. On the people of Kashmir, they were all harsh and excessive regimes whose memory lives on in the memory of their battered genes. Should you read Walter Lawrence’s The Valley of Kashmir, to this day probably the most definitive discourse on the nature of Kashmir and its people, you will get some sense of what also went into making the Kashmiri a crafty, and altogether changeable, survivor. It was brought on by mostly imported atrocity.

Kashmir, as we understand it today — and, arguably, there are many and disputed understandings of Kashmir — was re-birthed in another set of area domination enactments. It was the Dakota squadrons flying off Delhi’s Safdarjung (then Willingdon) airfield to unload Indian troops on the Srinagar airstrip on the morning of October 27, 1947, that blew off the Pakistan-backed tribal-military incursion and gave physicality — or geography, if you please — to the piece of paper called the instrument of accession. On the wings of the Dakotas droned in Tempests and Spitfires and Harvards, and surrounding earth and sky were soon secured, area domination established. It was a big bite of Kashmir, not all of it, but what piece there was was India’s, farsh se arsh, a thing of New Delhi’s suzerainty.

Since then, Kashmir has been taken by many tides and turns of area domination. The toppling of those that earned New Delhi’s disfavour (the 1953 arrest and internment of Sheikh Abdullah) and the installation of the favoured ones; a re-enactment of ruined loves (the 1975 Sheikh Abdullah-G. Parthasarathy accord) and, later, another rude annulment of it (the 1984 dismissal of Farooq Abdullah); the phosphorescent eruption of a bigoted military that bayoneted Kashmir’s Pandits out of their Valley homes and hearths; the government-backed counter-terror platoons of the Ikhwanis and their feared Special Operations Group encampments; the serial hijacking of the Kashmiri ballot; the many and long spells of governor’s or president’s rule by Delhi’s obliging proxies; the recurrent rumble against the existence of Article 370 in the Constitution and the very current judicial plaint on abrogating Article 35A (both bring essential guarantees to Kashmir and Kashmiris that underpin the accession and provide them the rather frayed solace of being a special people in a special place, which Kashmir is) are also, in more senses than one, an area domination exercise: expunge Kashmir’s special place in the Indian scheme, dismantle the guaranteed securities, render Kashmir un-special. A burning new argument has now been stapled to the assault on 370 and 35A — Pakistan has ‘completely changed’ the demography of Pakistan-occupied Kashmir! And so, as if to argue, why ever should we not? As if India, or the fundamental idea of it, were not imagined as a meditated contrast to the notion of Pakistan. As if India would do well to begin to aspire at a sameness.

The demography of Kashmir has already been violently and viciously altered once — on the Valley-wide spur of an armed militant insurrection in the early 1990s. Getting the Valley’s Pandits securely back to their shared homeland is the only demographic change this nation should reckon with. As things are, that, like far too many things about Kashmir, seems an improbable and doomed reckoning.

Those out on area domination duty in Kashmir offer little to what could minimally be called sensible, much less normal. In fact, what we have are violated figments of anything that can count as normal. The November just gone by has probably been the most pitiless in the memory of recent winters. Close to 50 people were killed this or that side of the fence that exists everywhere in Kashmir. More than 25 of them were marked militants, some of them were jawans, several of them children. There was, among the injured, a 19-month-old baby with a pellet-hole through her right pupil; Hiba looked a rag doll that the devil was just done with. She was part of the rites of area domination this month just gone. As were three Kashmiri youngsters, yanked off by dark hands and done to death — one of them by dagger or by sword run across his Adam’s apple — and made horrific examples of: Informers. Heretics. Deserving of the worst. That too is an area domination effort. How else are shadowy men with no license to use uniforms or arms or violence, men far fewer than the men licensed to chase and kill them, to establish domination over area but by terror, by frequent demonstration of an ability to strike with stealth and brutality on those they deem the enemy?

It is heart-warming, even poignant, that amidst such savage contenders for area domination also lurk a few seekers of ‘popular’ sanction who employ relatively benign instruments of area domination such as signatures on government files. The rushed jockeying for power by unlikely allies and unlikelier contenders that preceded the abrupt guillotine on the state assembly was charming evidence of it. There are those who still seek sanction. Omar Abdullah and his National Conference, Mehbooba Mufti and her Peoples Democratic Party, and now, too, Sajjad Lone and his People’s Conference, a tadpole party attached to a pole that has no Valley moorings. They have little else but flags — or back-room manoeuvring — to wage their area domination campaigns, and flags should be enough in democracies. But we are on Kashmir. So it’s probably a tribute to them they are still out with flags and slogans to effect their own kind of area domination. Vying for that nettled throne that has only ever bled the anatomies of those who’ve toiled and competed to sit on it. The chief ministership of Kashmir must rank among the most thankless — and painstaking — jobs going. A measure of gratitude should perhaps be extended to those who’d still take that job, even at the cost of brickbats, disapproval, often dismissal. Admittedly, sanction hasn’t been oozing from the people of Kashmir — oh yes, Kashmir is also a people, though we choose to forget so at our convenience. The truth is that the space for those that seek out public sanction and would willingly be cast aside when they lose it has shrunk; the dwindled numbers of Kashmiri voters on ballot day are proof.

But here’s the rub. Neither the military nor the militants — nor the majesty installed in Raj Bhavan — do Kashmiris have a vote on; the choice on whether and who they should vote for is for Kashmiris to make.