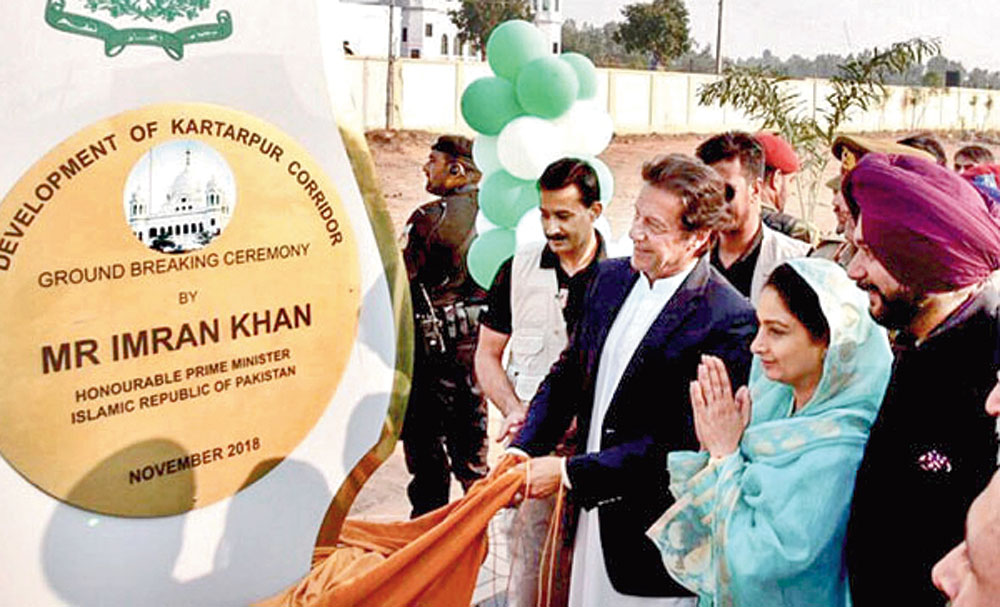 Sir — The decision to create the Kartarpur corridor, intended to enable Sikh pilgrims from India to visit the gurdwara in Pakistan without a visa, is welcome (“Build bridges”, Nov 30). It shows that if the two countries are willing to put in the effort, it is not impossible to adopt policies for peaceful exchanges. However, the recent controversies surrounding the comments made by the Punjab minister, Navjot Singh Sidhu, with respect to Amarinder Singh and the subsequent retaliation by political leaders are ruining the joy of the occasion. Even common people are reading too much into Imran Khan’s remark, where he said that the only unresolved issue between the two countries is Kashmir. Such negativity could affect the decision to undertake the project altogether. All parties should be careful so as not to ruin the peace efforts.

Sir — The Kartarpur gesture has been widely appreciated in the Indian border state of Punjab, especially among the Sikh community. The Pakistani prime minister has, in his various deliberations since he assumed power, expressed his willingness to bring about a thaw in the tense relations between the two neighbours. He cited the example of France and Germany, which have managed to leave the past behind.

Imran Khan further cautioned, and rightly so, that it would be unacceptable for the two nuclear-armed countries to think of war. A few days ago, the Indian prime minister, Narendra Modi, too, compared the opening of the corridor to the fall of the Berlin Wall, raising hopes for a breakthrough. Pakistan is also under severe international pressure to shun terrorism.

At this juncture, both the countries need to proceed together. The Kartarpur chapter, being a bilateral forum, could be the beginning of better ties between India and Pakistan.

Sir — Imran Khan has taken a positive initiative in laying the foundation stone in Kartarpur for the corridor linking the Darbar Sahib in Pakistan to the Dera Baba Nanak in Gurdaspur, India. One hopes that this will help forge a good relationship between the two countries.

The irony, however, is that the plotters of the Mumbai terror attacks of 2008 are said to be roaming freely in Pakistan. It is also unfortunate that even as steps are being taken to improve bilateral ties between India and Pakistan, the latter seems to have continued abetting cross-border terrorism, as has been claimed by the chief minister of Punjab, Amarinder Singh, with regard to the recent grenade attack in his state.

Sir — The proposal of constructing the Kartarpur corridor in time for the 550th birth anniversary of Guru Nanak in 2019 is potentially game-changing, given the years of conflict between India and Pakistan. India should have reciprocated Imran Khan’s offer to resume the stalled peace process, since bilateral disputes — including the vexing issue of Kashmir — can be resolved through comprehensive dialogue.

Unfortunately, although Narendra Modi initially appreciated the proposal, the ruling party seems more keen on winning the forthcoming general elections by instigating the electorate against Pakistan. This will keep the hostility between the two countries alive, instead of building bridges.

Sir — The proposed Kartarpur corridor is a step in the right direction in improving the ties between India and Pakistan. But this symbolic gesture must be followed up with concrete changes in policies by both governments. This has not been possible yet, because both sides of the border have so far been unwilling to hold bilateral talks to settle the issue of Kashmir, let alone recognizing the voice of the Kashmiri people in the matter.

Now that the new prime minister of Pakistan, Imran Khan, seems open to dialogue, India should reciprocate. The Kartarpur corridor could then lead to long-term peace between the two neighbouring countries.

Sir — Admirers of William Shakespeare all over the world must be delighted to know that Al Pacino is going to play King Lear on the big screen (“Pacino to play Lear”, Nov 26). The veteran actor was earlier seen as Shylock in the 2004 adaptation of The Merchant of Venice, where he was lauded for his portrayal of the complex personality of the Jewish moneylender. As a play, however, King Lear is more challenging than The Merchant of Venice. The former was considered “the most elemental and primeval” of Shakespeare’s plays by the critic, A.C. Swinburne. One looks forward to seeing Pacino take up the challenge.