God and the forsaken

This year, ordinary citizens braved the pandemic and poured out of their homes to celebrate life and living 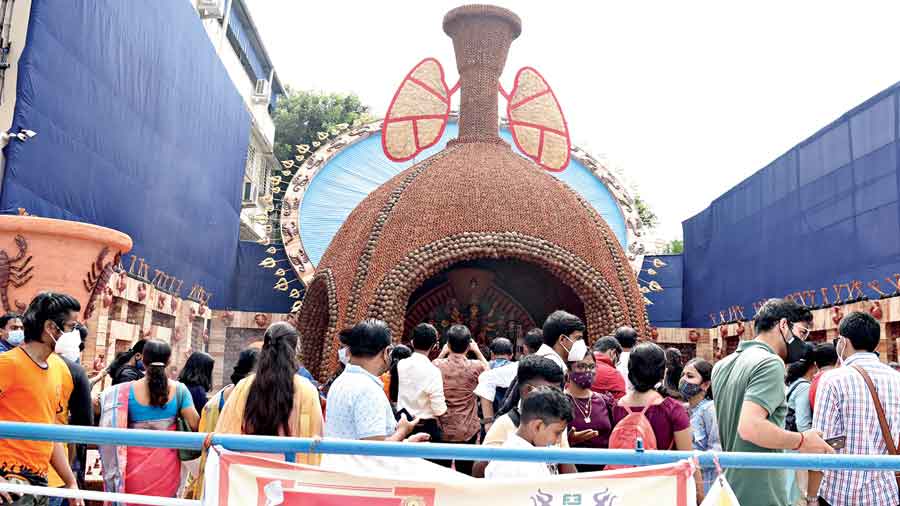 This Durga Puja, the Bengal BJP found new reason to be offended. In the pre-Assembly election years, the complaint had been that the people of the state were “not allowed to celebrate Puja”. But this year, ordinary citizens braved the pandemic and poured out of their homes to celebrate life and living; hence, a new line of offence was sought and found. And there it was in a Durga mandap. A pandal in Dum Dum Park had put up an installation of a giant pair of blistered feet and hundreds of orphaned footwear. There were pro-farmer slogans and graffiti too, around the place. A tractor full of gunny bags at the entrance. All of it some distance away from the idol of the goddess.

These Pujas, there have been pandals themed on issues as varied as a childhood swallowed up by a virus and the worry of having to prove citizenship. Like every year, this year too, the pandals and their art mirrored life as it is. Light installations showed oxygen cylinders and, aesthetics apart, there was a pandal designed to look like lungs.  But all that the Suvendu Adhikaris and Tathagata Roys saw in the Dum Dum Park installation was a “heinous act” and an affront to Hinduism and therein pulled down man and god alike. Neither divinity nor humanity is so fragile that they will come apart on interpretation. Poor politics is another matter.