Ink’s not dried yet

A year of anniversaries in India-Pakistan ties 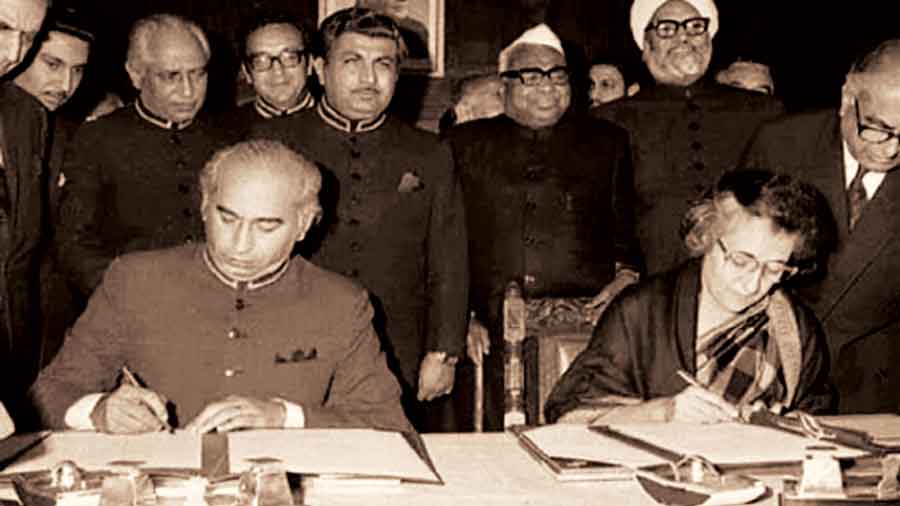 There are other anniversaries in the 75th anniversary of our Independence,although they are being observed witless fanfare. Earlier this month, on July 2, fell the 50th anniversary of the Simla Agreement, marking the closure of the final chapter of the India-Pakistan war in 1971.

Although it was noted, it did not receive much attention in either country. The Agreement’s most significant takeaway is bilateralism. Perhaps one reason for its somewhat subdued recall is that it evokes sense of frustration, if not failure.For Pakistan, the case is straightforwardness is a reminder of its breakup in 1971 and how it was then forced to dilute and compromise its position that the future of Kashmir was to be settled bilaterally and not in terms of the United Nations Security Council resolutions.

In India, while the gain of bilateralism as compared to a UN role is acknowledged, for many the advantages gained was incommensurate with the magnitude of the military victory and the battlefield gains,which, it was felt, were lost at the negotiating table. This is, however,often an emotional analysis disregarding what was within the realm of possibility. Nevertheless, the argument acquired traction with the beginnings of a Pakistan-sponsored insurgency in Jammu and Kashmir from 1990 onwards and the frustrations of successive policy failures in restoring normalcy in the state are increasingly ascribed to the ‘failure’at Simla in 1972.

This year also marks another significant milestone for India- Pakistan bilateral ism — the anniversary of the ‘Composite Dialogue’. Over the second half of 1997, the framework for a structured dialogue comprising eight elements was finalised. None of these elements was new and each had been discussed for many years; what was new was their packaging together.The Composite Dialogue had a fairly long shelf-life and finally ground to a halt only in 2016 with the major downturn in India-Pakistan ties that began then.

That downturn is now in its sixth year and includes downgrading of diplomatic ties with high commissioners absent in both capitals, a freeze on trade and cross-border movement of people, the absence of political contact and, finally, frequent exchanges of acerbic comment.Terrorist attacks in India, robust counter measures including an airstrike inside Pakistan, the visceral Pakistani response to the legislative changes in J&K in August 2019 have all contributed to the downturn.

Downturns of this kind where bilateral activity goes into virtual hibernation are not new so the present impasse, although long, is not entirely unprecedented. That the bilateral freeze coincided with a major pandemic in the current phase has also diffused its overall impact.

It is certainly the case that the reaffirmation of the ceasefire on the Line of Control early last year has contributed greatly to a significant dialling down of tensions. Clearlya shared realisation exists in both governments that the daily tactical skirmishing on the LoC, which accompanied the political downturn,was not in either’s interest.

A little over a year after the ceasefire, a change in government in Pakistan suggested — briefly— some further possibilities of change. The exit of the maverick Khan and the return of the party of the former prime minister,Nawaz Sharif, to power were obvious enough pointers. He was, after all, the prime minister who had initiated the Composite Dialogue a quarter of a century ago.

However, the current situation in Pakistan suggests that the decks are clearly stacked against any initiatives to bring about a thaw. The transition away from Imran Khan has been fractious and messy and both the longevity and the effectiveness of the present government remain in doubt. A dire economic situation fuels turbulence and pictures emanating from Sri Lanka add intensity to the predictions by doomsday advocates. A looming transition with a new chief of army expected in November adds to the general uncertainty of it all. This internal churn means a self-absorbed Pakistan and a political climate not conducive to any fresh thinking about the country’s biggest foreign policy challenge.

In India too, there is inertia but of a different kind. There is general sense of exhaustion with bilateralism with Pakistan, the consequence of an accumulated frustration that nothing has ever really worked in the dealings with this most recalcitrant of neighbours.This is alongside deep-seated public cynicism about any possible positive outcomes emerging as consequence of political initiatives.The end result appears then as the consolidation of the view that diplomacy's a weak instrument to deal with a neighbour such as Pakistan and that the challenges it poses are best addressed as a security issue on the borders or by a counter- terrorism strategy. Diplomacy, in so far as it enters, is seen as multilateral or third country directed as an instrument to put further pressure on Pakistan or isolate it.

This view is not without substance.Certainly, over the past seven decades, a security-heavy approach has never been absent in the interface with Pakistan. It is also true that robust countermeasures,such as the Balakot air strike, have clearly signalled new threshold sand red lines with regard to terrorist attacks. This is a big positive,quite apart from the question of the tactical success of the operation.

To many, the long impasse since 2016 is even suggestive of a new normal in India-Pakistan relations. But this view is clearly mistaken because permanence here or, for that matter anywhere else, is an imaginary construct.Dealing with Pakistan on the security dimension alone remains inherently a limited and self-limiting approach. It does not bring into play numerous other strengths which India possess and that alone have the potential to impart stability in what will always remain an inherently disharmonious relationship.There is, however, no direct argument that can dissolve the multiple layers of public cynicism that exist. But there are good reasons to constantly make the attempt.In this year of multiple anniversaries,the war in Ukraine itself is a standing example of how quickly tense neighbourhood situation scan unravel unless there are alleviating processes and structures in place.

(T.C.A. Raghavan is a former high commissioner to Pakistan)