Myanmar’s military is sticking to its battle plans 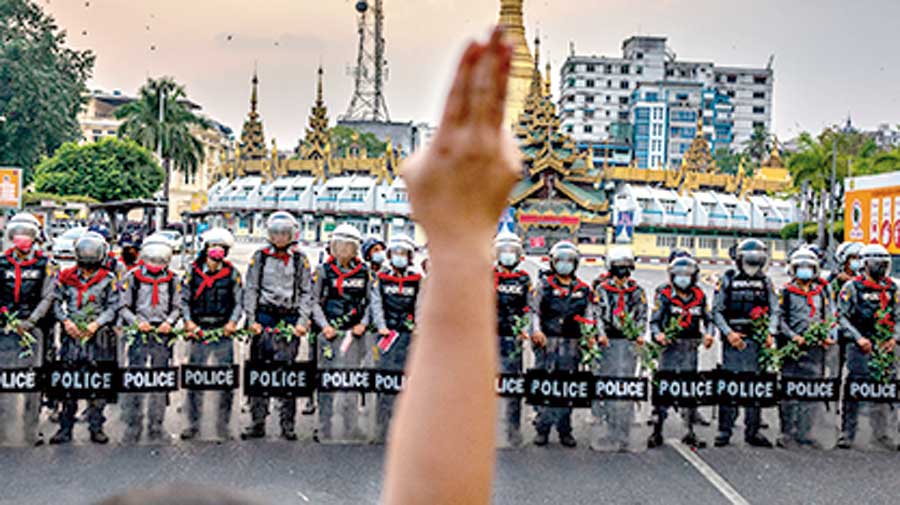 Myanmar remains in the midst of a pro-democracy uprising that continues to challenge the country’s generals more than a month after the military coup. While the protesters and the civil disobedience movement are using various tactics on the street to maintain momentum, the strikes are continuing and wreaking havoc on the economy. The banks are closed, government offices empty and the country’s fuel supplies running dangerously low. Hospitals, universities and schools are mostly closed and most factories have also been idle.

Meanwhile, the military is sticking to its battle plans and preparing to crush the protest movement. The security forces have put up barricades and blockades across strategic roads and thoroughfares in many of Myanmar’s prominent cities to enable better crowd control and dispersal. Greater number of troops and police have been strategically positioned everywhere, with convoys of soldiers and sailors being sent in as reinforcements to strategic towns. Tanks and water cannons have also been deployed in the major cities.

After four weeks of relatively restrained action, the military has been progressively ratcheting up its response. This was highlighted by the tragic events in the last weekend of February that claimed 18 lives, although local monitoring groups believe that the toll is higher. The fear is the closer it gets to March 27 — Armed Forces Day, the premium anniversary celebrations for the military — the latter will not be able to tolerate the continued civil disobedience campaign nor the protests on the street. So expect the army to deploy its full military might against the protests before then.

But parallel to their war against civilians on the country’s streets and neighbourhoods, the coup leaders are rolling out their plans for political reform that will cede them a continued and permanent role in the political structure. A game plan has been developed by the military over the last three years with more than 200 members having formed a secret think-tank, including senior officers taken off active duty and retired generals, preparing various scenarios behind the scenes, ready to roll them out at a moment’s notice.

Myanmar’s top generals understand that the iconic, pro-democracy leader, Aung San Suu Kyi, remains the most significant thorn in their side and the greatest obstacle in the way of their plans. So they have launched a surgical strike against her — the country’s most popular civilian leader — in an effort to stain her character and end her political career permanently. The Lady, as she is widely known, has had a plethora of charges laid against her over the last few weeks. Each time she appears in court, extra charges are read out. She is also facing charges of corruption, sedition and, possibly, treason. Initially she was charged with violating government restrictions relating to imported walkie-talkies and breaking Covid restrictions during a campaign rally — the international community and human rights groups regard these as frivolous. But more charges are being prepared, according to sources close to the military.

If convicted, it will prevent her from standing in future elections. The coup leaders have promised elections sometime next year after the state of emergency they have imposed is lifted. The authorities are still investigating more serious accusations related to receiving foreign funds, which could amount to treason.

While many analysts and commentators are drawing analogies with the pro-democracy struggle of 1988, the army is much better prepared now than it was then, although there are some elements of comparison. The new junta is desperate to be recognized internationally, claiming the power grab was done legally and in accordance with the 2008 Constitution, which it drew up to legitimize a form of civilian-military government. The junta claims this coup, unlike the one that crushed the mass movement in 1988, is merely an administrative change. But as most commentators and diplomats point out, this cannot be further from the truth.

Some parallels and echoes are there: after the resignation of the former dictator, General Ne Win, and the subsequent military coup, the State Law and Order Restoration Council formally took control of the country’s executive, legislative and judicial functions, much like the current State Administrative Council that is also governing by edict. It also gave birth to the notion that a multiparty democracy was the best fit for Myanmar, and was enshrined in the 2008 Constitution that was drawn up later. It created the military’s nemesis: the National League for Democracy and the emergence of Aung San Suu Kyi as the living symbol of the country’s aspirations for a democratic future.

The current intense struggle is between the democratic aspirations of the majority — including those of ethnic minorities — and the army that is desperate to regain its shrinking authority and control over the country’s transition to democracy, which it defines as ‘guided democracy’ with the army in a supervisory role. These competing visions of democracy are currently being played out on the streets of Myanmar. Both sides are preparing for a long battle.

In the short run, the coup leaders’ plan is transparent: convict Aung San Suu Kyi and prevent her from competing in future elections. Other prominent NLD politicians, including the president, Win Myint, and the Mandalay chief minister, Zaw Myint Maung, have also been charged with breaking Covid-19 restrictions. A case of corruption is also being prepared against the Yangon chief minister, Phyo Min Thein, according to government sources. The army sees the NLD as a snake and is intent on lopping off its head so the NLD cannot speak out or organize. But the army may have misjudged the mood of the people. A new generation of political leaders is already emerging.

On its part, the army has put in place its roadmap for the future: promising fresh multiparty elections after the current state of emergency expires in a year’s time — although under the Constitution it can be extended for up to another year — and pledging to hand over power to the duly elected majority party or the coalition that it prefers to see. This is similar to what happened in 1958, when the then prime minister, U Nu, temporarily handed over power to the army chief, General Ne Win. Fresh elections were held in February 1960 — four months after the military caretaker government took office.

Having crafted a Constitution in 2008 that catered to its political vision, the army is now trying to correct some of the perceived inadequacies that have emerged as a result of its abject failure to understand the people’s deep desire for democracy as represented in the second overwhelming electoral victory of Aung San Suu Kyi and the NLD in the November 2020 elections. Before it can hold another round of elections, the army needs to eliminate the NLD in order to have a repeat of the sham elections of 2010 that brought in the ‘quasi civilian’ government of Thein Sein. So the military commanders are intent on preparing a case against the NLD in order to ban it from politics and declare it an illegal organization.

The military foresees a political future where the army is an integral part of the political set-up, integrated into the power structure and administration along the lines of Thailand. In fact, the commander-in-chief, who is personally fond of Thailand, sees this as a model — an important role for the army where the military’s economic interests are protected, a self-sufficient economy and a ‘democratic’ outlook, resisting leftist, socialist or communist leanings. It is a concept of pluralist democracy with no interest group having a dominant role or power, allowing the army to continue to play a critical role. To strengthen this vision of politics, the coup leaders are planning to change the voting system from first-past-the-post to proportional representation, which will mitigate big parties dominating elections and having a massive majority, particularly in Myanmar where there are more than 90 registered political parties. This would allow the military a quarter of the parliamentary seats to control the legislature and the selection of the executive in coalition with some like-minded parties.

The coup leaders also see the ‘roadmap to democracy’ of the former Senior General, Than Shwe, developed in 2003 by the then intelligence chief and prime minister, Khin Nyunt, as part of the model to be followed. The projected final stage, before a more liberal form of democracy, was a coalition government of national unity. That is what the military is currently rolling out as part of its current administration. It aims to ensure that this happens after the next election.