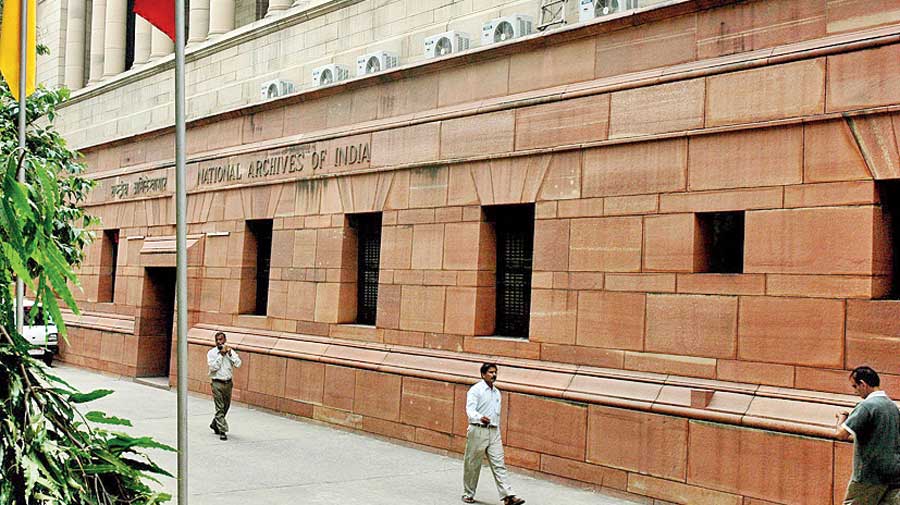 In Archive Fever: A Freudian Impression, Jacques Derrida wrote, “[e]ffective democratization can always be measured by this essential criterion: the participation in and access to the archive, its constitution, and its participation.” These words, rather premonitory and prudent, further shake the intellectual conscience at a time when the Annexe building of the National Archives of India along with the National Museum and the Indira Gandhi National Centre for the Arts are ready to be demolished. This move by the Centre is to make way for the Central Vista project that proposes to build a new Parliament building and new residences for the prime minister and the vice-president.

The demolition of the NAI Annexe building entails a serious risk involving the transfer of historical records from old repositories to new, temporary storehouses. It has invoked resentment among various sections of society — in India and abroad — as archives are not only central to the scholarly enterprise but also markers of active civic endeavour in a democratic society. Meanwhile, the Union minister of culture, Prahlad Singh Patel, has assured that the main Lutyens’-style building of the NAI that houses the ‘majority’ of the repositories will not be affected by the Central Vista project and, hence, resistance against the demolition is unnecessary.

The NAI, the largest repository of historical documents, has been serving scholarly and intellectual needs of the country for the last 130 years. It came into existence in Calcutta in 1891 as the Imperial Record Department with a staff consisting of one keeper and eight clerks. Following the transfer of the colonial capital from Calcutta, it was shifted to Delhi in 1911 and was later rechristened the National Archives of India on August 30, 1947. As a custodian of public records, it preserved various government documents from different spaces and times. The holdings of the NAI constitute the records and treatises of the East India Company, the records of various departments of the government of colonial India placed under the governor-general that include public/general/home department (1764-1879, 1881-1946), residency records (1801-1954), foreign consultations (1860-1905), the governor-general’s secretariat’s records (1890-1949), among other documents. The NAI’s cartography section houses more than one lakh maps, including some rare and confidential maps related to various parts of India and 30 other countries, such as Afghanistan, Pakistan, Bhutan, Myanmar, Nepal, Tibet, and China, from as early as 1600 AD. The NAI also has a private archives section, which has in its custody an extensive collection of private papers of historical significance. These papers are acquired either as gifts or donations from various trusts, families, and individuals or are bought by the purchase committee of the Indian Historical Records Commission. The Oriental Division, another important part of the NAI, preserves around 1.3 lakh Persian, Arabic and Urdu documents in the form of manuscripts, parwanas (permits), farmans (royal decrees), and bai’namas (sale deeds) and various official Mughal documents from the period of Aurangzeb (1657-1707) to Shah Alam II (1759-1806), one of the major transitional periods in Indian history.

Since Independence, the NAI has been expanding and preserving public records of the post-1947 period as well, covering major episodes in the formative years of independent India. These include documentations related to major political happenings, such as the transfer of power from the British, attainment of Independence, Partition, property claims of Partition immigrants, rehabilitation, integration of the princely states into the Indian republic, framing and adoption of the Constitution and the liberation of colonies from France and Portugal. It evolved from a colonial organization of record-keeping for administrative convenience to a postcolonial repository of historical documents/rare manuscripts and an institution of knowledge-production in India.

The NAI complex has two portions: the old Lutyens’ building and the Annexe building, which would be demolished. The old building serves as the administrative block and accommodates Repository numbers 2, 3 and 4. These three repositories house the documents of the post-1857 period. The Annexe building houses Repository number 1 (preserving documents from 1748 to 1857 in a regular series), the Oriental section, the Private Archive section and the Accession Records section where newly-acquired documents are stored before being catalogued. The records of Repository number 1 and the Cartography section are very old and, naturally, most of the records are very delicate and brittle. The Oriental section in the NAI is already grappling with such issues as administrative apathy and intellectual negligence that have grotesquely stunted its functioning. The factors contributing to this indifference are numerous. The non-acquaintance of archivists and of new scholars with Persian, Sanskrit and Urdu records, most of which are in the Shikasta script, is a principal problem. The problem has been confounded further with the NAI’s decision to acquire manuscripts and documents in regional languages especially after 1950. Consequently, the holdings of the NAI have increased enormously without a corresponding rise in expertise of archivists in those scripts and languages. This restricts their engagement with these records. The end result of this gap between acquisitions and available expertise has led to the locking up of some of the rare documents in Persian, Urdu, Arabic, Sanskrit, Prakrit, Tamil, Malayalam, and Modi (records from Maharashtra). The transfer of these records in the absence of staff possessing linguistic skills is not only an onerous job but also portends intellectual alarm.

In this context, it must be noted that some important series of documents that were recently acquired and kept in the Accession section in the basement of the Annexe building are still awaiting cataloguing. Some of them — six lakh documents pertaining to the pensions of freedom fighters, ten lakh claim files of post-Partition immigrants from Pakistan, a huge bulk of military records and those of the Archaeological Survey of India — need to be catalogued to augment further research in these fields. Additionally, newspapers like the Jam-i-Jahan Numa, the first printed Urdu newspaper in India that is preserved in the NAI, are yet to be catalogued. The dearth of regular staff and the vastly diminishing capacity of archivists to read the languages and scripts in which the materials are preserved are two most visible reasons for such a lapse. The demolition of this building, therefore, would put innumerable such documents at the risk of getting lost or damaged on account of being mishandled by inexperienced hands. The documents also face a larger menace: of being damaged by environmental threats or falling prey to microorganisms, termites and white ants if physical conditions like temperature, humidity and access to light are not maintained at standard levels in the new storing places.

A sense of urgency has emerged because the officials working in the NAI are yet to receive any plan of action for the safe transfer of records to a place that fulfils the pre-requisite environmental conditions for safe storage, even though digging for the Central Vista project has begun on the Rajpath in spite of the pandemic. Any arbitrary or hasty transfer can lead to loss and mismanagement of records. They would then be unavailable for scholars who are already inconvenienced because of limited access to records due to the pandemic. The statement by the Union minister of culture might appear impressive but it does not invalidate the concerns about the transfer of records following the demolition of the Annexe building. It is pertinent to understand that museums, libraries, archives create and preserve national identity and contribute to the democratic stability. The NAI, having a long history of its own and marked by the complexities of its time, symbolizes the entangled histories of India. Therefore, proper consultation with and participation from archivists, historians, and librarians should be sought before muddling with the existing order of the historical records.

The author is Assistant Professor in History, AMU