Why blame China and Sri Lanka, when western friends have ceased to consider South Asia and its waters, India’s ‘traditional sphere of influence? 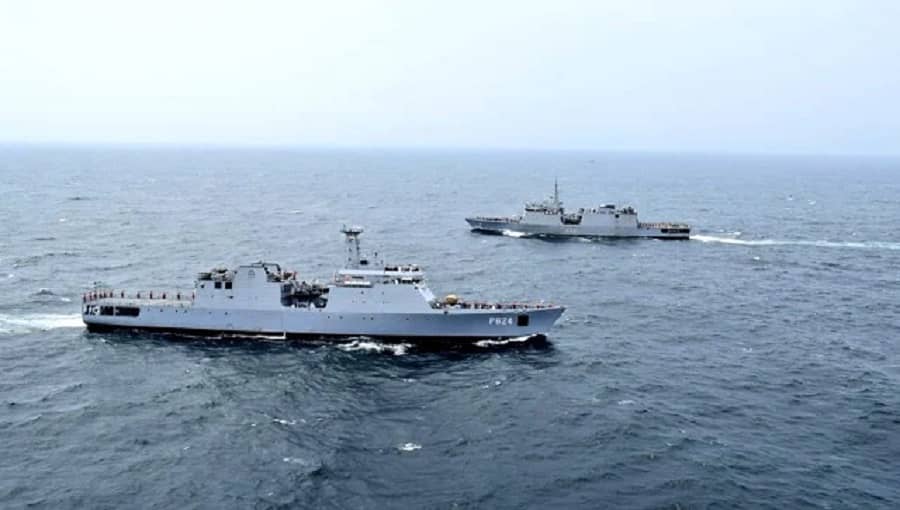 Looked at from this side of the Palk Strait the Chinese threat looms large in Sri Lanka. Most recently, the Sri Lankan parliament passed the Colombo Port City Commission Bill with a nearly two-thirds majority in the 225-member house. Land reclamation work on what will be the Chinese-built $15-billion mega-special economic zone began in 2018. The passing of the bill revived India’s concerns about Chinese domination of the island nation.

But the real game is being played beyond Sri Lanka in the shared waters of the Indian Ocean where the Chinese and other global powers all want to fish in troubled waters.

Over the past decade and more, China has become India’s main irritant on the Indian Ocean front, just as it has been along our land border. If the Indian Navy began receiving more funding in recent years, it’s because of what an American scholar identified as China’s ‘String of Pearls’tactics. Sri Lanka, the teardrop-shaped island has become the pendant in that string when looked at from India.

The Port City which aims to be an international financial enclave with Chinese funding and participation, has been in the news for close to a decade.  Only the bill part is new and is aimed at putting a management scheme in place, and, in the process, legitimise Chinese ‘occupation’.

The provision for co-opting ‘foreigners’ on the board and sanctioning payments in foreign currency are expected to work in China’s favour, to the near-exclusion of other nations, most of which are unlikely to be interested anyway just for the very same reason.

From a Sri Lankan point of view, the Port City promises tens of thousands of jobs for the locals – though it remains to be seen whether these will be at the top or bottom-end. But even this will be a departure from the norm. For all other Chinese-funded projects, all the labour and the material needed are sent from the Middle Kingdom. But following that model in Covid-ridden Sri Lanka could easily have led to social unrest and political instability, which the ruling Rajapaksas cannot afford.

Leaving out the divided Tamil polity, there is a ‘national consensus’ in Sri Lanka, when it comes to working with China on the so-called development front. Sri Lanka has always faced the danger of being an economically unviable nation, depending exclusively on a traditional agriculture and tourism economy. But that cannot address the economic aspirations of the citizenry.

In turn, the elimination of the LTTE more than a decade ago too has deprived the rationale for the majority Sinhala people and polity to remain united. Nor can the Sri Lankan state and the Sinhala polity afford a social struggle like the two 'JVP insurgencies’ of 1971 and 1987-89. It was the first militant uprising in the post-Independence era, after which independent Tamil youth groups took to guns in the North and the East. This turned into the LTTE.

For Colombo, the Chinese are important in two ways. First, they provide funding for growth and development. Colombo also wants Beijing’s backing to block Western criticism particularly at the UNHRC for the way it put down the LTTE insurgency.

India doesn’t fulfil these needs for the Sri Lankans. We concluded it wasn’t an economically viable project, that too when India was still coming out of the massive cash-crunch of the ’90s. At a different level, India is not a P-5 member in the UN Security Council with a veto, which is what Sri Lanka needs if there are any moves against it.

The ‘national consensus’ has thus worked to China’s favour. The ‘Big Two’ political parties of the majority Sinhala community seem to have an unwritten understanding to have India as their security guarantor, but accept developmental funding from wherever it came.

If the ruling Rajapaksas thus launched the unviable Hambantota project, their political Opposition helped convert it into a debt-equity ‘swap deal’, handing over Sri Lankan ‘territory’ on a 99-year lease to China. The Opposition voted recently against the Port City Bill on specific aspects but the fact was that the government did not require their support. They still welcome the project because it is expected to help to revive the Sri Lankan economy.

Thus far, the Chinese have tried to package their presence in Sri Lanka and around the region as benign and development-driven. That is obviously not enough to ease Indian anxieties.

India’s strategic interests have changed sharply in recent years. Step back many decades and our concern was over the US base at Diego Garcia. This became particularly acute in the wake of the 1971 Bangladesh war when the US Seventh Fleet was despatched to arm-twist India and prevent us from over-running the erstwhile East Pakistan.

The tables are turned now, and Indians are not talking about the Cold War past and the accompanying American interest in Sri Lanka. Ever since the post-Pokhran II (1998) Vajpayee government, New Delhi has been bending backward to accommodate the US and its allies, leading up to the Quad strategic-military arrangement, also involving Australia and Japan.

But India’s ‘Malabar Exercises’, since expanded to include all Quad members is not the only one. India has the ‘Varuna’ exercises with the French, a quiet but dependable military supplier for decades. New Delhi is also on record that it was working on similar but separate military exercises with Russia and the UK, as with other nations, before Covid intervened.

France also has greater legitimacy to access the Indian Ocean, given that it has greater territorial interests in the region than any other erstwhile colonial power, including the UK with islands of what is residual BIOT (British Indian Overseas Territory) in the Indian Ocean Region, still under the control of the UK.

Lately, Germany another aspiring European nation too has crafted an Indian Ocean doctrine. Maybe, the European nations will take their time to venture out, either under the EU flag, or as individual nations, but may wait for others to fight their Neo-Cold War before entering big time, if at all.

From an Indian perspective, our enduring strategic connection with Moscow suffered after President Boris Yeltsin, under American pressure, held back cryogenic engines for ISRO’s space programme, and also impeded India’s military preparedness in other ways, during the nineties. Yet, Russian diplomats across India were rattled when India signed the precedent-setting defence cooperation agreement with the US in 2005.

Russia began taking interest in India’s neighbours, including Sri Lanka, then, but seemingly slowed down in between, possibly owing to President Vladimir Putin’s strategy to strengthen the home front. Delhi thus got a breather on the Russian front at the time. Yet, Moscow began dabbling with Islamabad, supplying them with weapons that they had denied in the Cold War past and later. Is that a tit-for-tat, or the Russian way of protecting their own strategic interests in South Asia?

India’s relations with Moscow, especially on the geo-strategic front, are not as unshakeable as they were in earlier decades. Moscow is alive to New Delhi moving further away from it and into the American orbit for good. That’s despite what they now seem to have concluded is a one-off S-400 missile defence programme with India.

India in recent times has expanded the scope and reach of the IOR (Indian Ocean Region) Division, which itself was a relatively new entity in the Ministry of External Affairs, to include Comoros, Madagascar and French Reunion, among others, to push the periphery to coincide with the emerging Ocean-centric strategic realities to suffocate China within what is known as the 'Indian pond'. That is, the waters on this side of the arc comprising Comoros, Madagascar, Reunion and Mauritius, all the way up to Maldives and India's own Lakshadweep group of islands, with Assumption Island and Seychelles in the middle. The US' Diego Garcia military-base is located in these waters.

But ever since the Cold War era, our neighbours see New Delhi as being unconcerned about their strategic interests. On the contrary, India is their prime suspect, following its role firstly, in the creation of Bangladesh. Later we also launched extra-territorial missions – the IPKF to Sri Lanka (1987-89) and ‘Operation Cactus’ in the Maldives (1988), though in both cases, New Delhi's decisions derived from specific requests from embattled governments in the respective countries.  They also feel they should have been consulted either before or after signing epoch-changing defence agreements with extra-regional powers (the Soviet Union, 1971 and the US, 2005).

Such arguments may have some merit considering the relative sizes, cut off from their historic and cultural roots that some Indian seems wanting to impose on them, as if they as nations and peoples owe their present to their Indian past. But more importantly, they resent India and Indians continually suspecting them, vis a vis New Delhi’s given position viz a third nation at a given time.

India, of course, looks at it differently. Through the Quad and other military exercises, India may have diverted some of the strategic concerns to the Ocean front, from the land border with China.

If and when, battlelines are to be drawn for a Neo Cold War, or even beyond, then Indian allies are now clear. China can count on Pakistan, yes, and possibly, Afghanistan’s Taliban by default. Where does that leave a peeved Iran, whom India has hurt over US sanctions, and Russia, which would have to make a choice, if it had to be counted?

Indian Ocean used to be considered India’s pond. China has since declared that it’s not India’s Ocean even though it claims the South China and East China Seas are its own. But then, why blame China and Sri Lanka, when western friends have ceased to consider South Asia and its waters, India’s ‘traditional sphere of influence’ and want to fish in the troubled waters even post-Quad?

The US has even tried to sign a framework defence treaty last year with the Maldives -- reportedly behind India’s back. The SOFA (Status of Forces Agreement) contained clauses for US armed forces to carry personal arms as they roam around the idyllic and not be subject to local laws. It was an example of the global games that are underway in the seas around India.