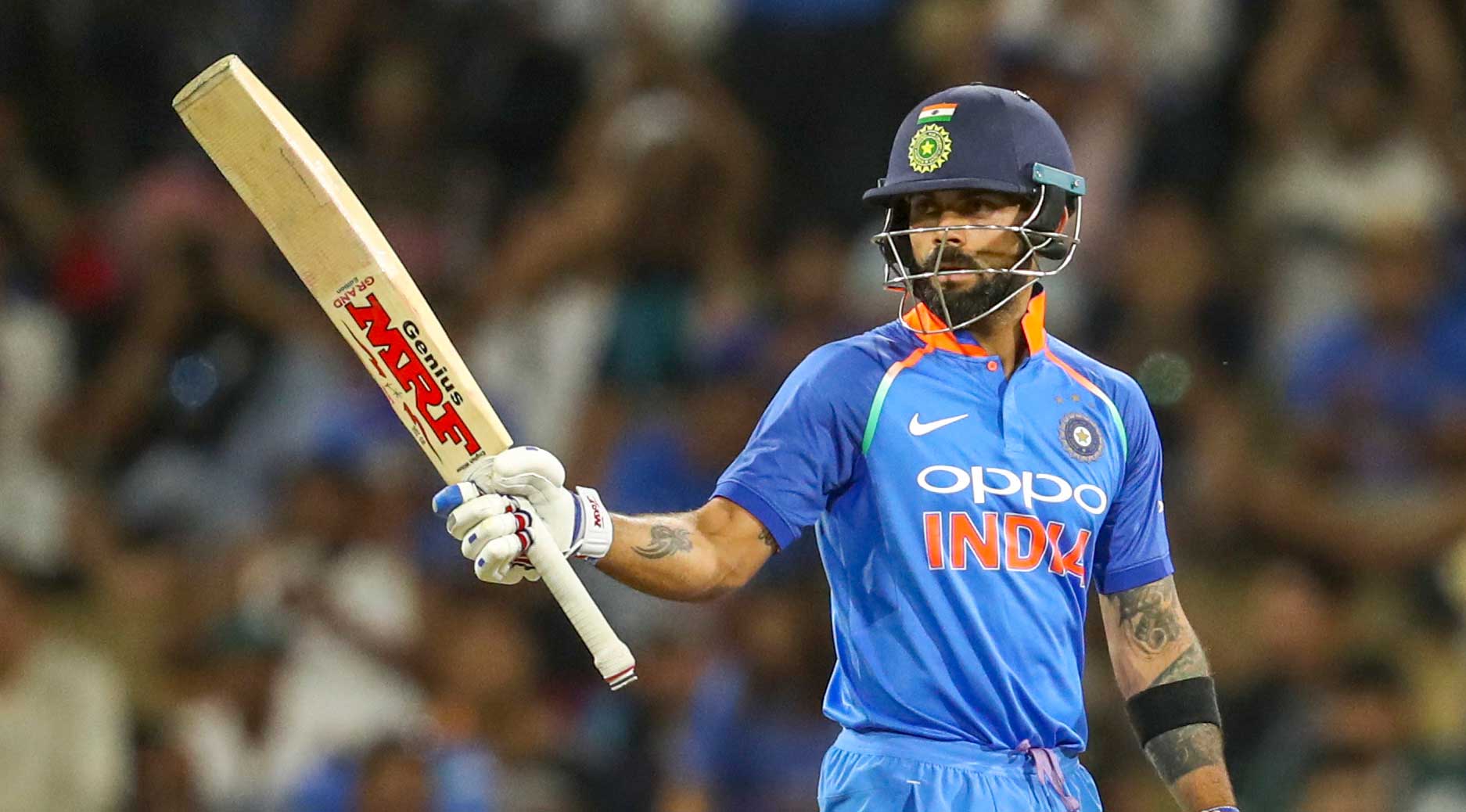 Virat Kohli celebrates his half-century against New Zealand during their third one day international match at Bay Oval, Tauranga, in New Zealand, on Monday
(AP Photo)
The Telegraph   |   Published 29.01.19, 11:19 AM

Sir — By being named the Test Cricketer of the Year, ODI Cricketer of the Year and the Cricketer of the Year by the International Cricket Council, the captain of the Indian men’s cricket team, Virat Kohli, has made Indians immensely proud. He has also created history with these stupendous achievements — Kohli is the first player to win all three awards in the same year. He deserves the recognition; apart from his own records in terms of runs, he has also proved to be a successful captain. It was under his captaincy that India won a historic Test and one-day international series for the first time ever on Australian soil.

Norwegian billionaire Gunhild A. Stordalen, who funded the study behind the ‘diet plan’ for the world, advocates saving the planet by cutting down on meat consumption, but reportedly flies around in a a £20-million private jet
Photo: @G_stordalen on Twitter

Sir — The editorial, “Crash diet” (Jan 25), correctly pointed out the shortcomings of the ‘planetary health diet’ that was recently published in the journal, Lancet, as a road map of sorts for the world’s population to correct its eating habits. While it is true that increasing the intake of fruits and vegetables as part of one’s diet can be nothing but beneficial for health, it is difficult to fathom how the proponents of the study expect communities around the world that traditionally eat meat to suddenly begin disregarding their cultural practices. There is no denying that unsustainable farming methods for meat production contribute to increased emission levels, thereby affecting the planet, but the report conveniently fails to recognize the ways in which scientists have been exploring the possibilities of producing meat more sustainably. The concept of cultured meat is gaining recognition, for example.

Most interesting, however, is the criticism levelled at Gunhild A. Stordalen, the Norwegian billionaire who funded the study on the basis of which the ‘diet plan’ for the world was designed. Even though she advocates saving the planet by cutting down on meat consumption, people are pointing out that she owns a £20 million private jet in which she travels frequently. If Stordalen is so concerned about climate change, is she not aware that air travel pollution is a major contributor to global warming?

Sir — I decided to do a bit of research of my own when I read about the ‘diet plan for the world’ that was published in the Lancet journal. It turns out that the study was bankrolled by a billionaire from Norway who lives such a lavish lifestyle along with her husband — a hotel mogul named Petter Stordalen — that one would never guess that they are ‘concerned’ about the planet. They contribute to air traffic pollution by flying all over the world in their private jet, and the hotelier recently posted a photograph on social media of himself eating a gigantic beef and bacon burger. Yet, these are the people telling the rest of the world that they should eat little to no meat as it harms the planet. With such flagrant hypocrisy on display, is it any wonder that they are inviting criticism? As far as the study itself is concerned, while it makes valid points about the serious global lack of nourishment, it clearly has not taken into account the sheer diversity of food practices around the world.

Sir — India has achieved food security, but nutrition for all citizens is still a far cry. Malnutrition, as pointed out in the editorial, “Crash diet”, is a serious concern, especially in developing countries like India. In order to improve health, citizens must consume not only rice and wheat but also milk, fish, fruit, vegetables and spices. India is known for its culinary diversity and varied food habits and practices. But the calorie intake for citizens must be adequate to maintain a healthy lifestyle.

The editorial also refers to the propensity of the rich sections of society to waste food. Hence, while a universal ‘dietary model’ can be easy to prescribe, it shall be difficult to implement.

Sir — I am a senior citizen who has been residing in the Gariahat area of Calcutta for the past 65 years. Over the decades, I have witnessed how hawkers have gradually gone from occupying tiny, bench-like kiosks to blocking the entire footpath. Today, not only have the pavements in all four directions from Gariahat junction been taken over by hawkers, but they now also permanently occupy spaces on the main road. If there is ever a gap created, a food stall of some sort immediately comes up there. This is most dangerous: for example, food is fried in hot oil right next to a bus stand.

There is also no chance for pedestrians to get onto the footpath to escape the heavy traffic on the road. Moreover, if pedestrians are waiting to cross the street, the hawkers often verbally abuse them for standing on the footpath and ‘blocking’ the way to their outlet.

There cannot be any sympathy for people who behave in this manner, especially when they are running illegal establishments. As law-abiding taxpayers, we have a right to use the footpath. It must be asked why the state government is not doing anything to bring the hawkers to book, or to at least make them adhere to some rules. The government could make space for their shops above the Gariahat Market, for example. Pedestrians must not be humiliated for exercising their right to use the pavement.