Can borders separate insiders from foreigners?

In a contemporary sense, the answer would be an emphatic yes. But perhaps in a historical sense it would be no 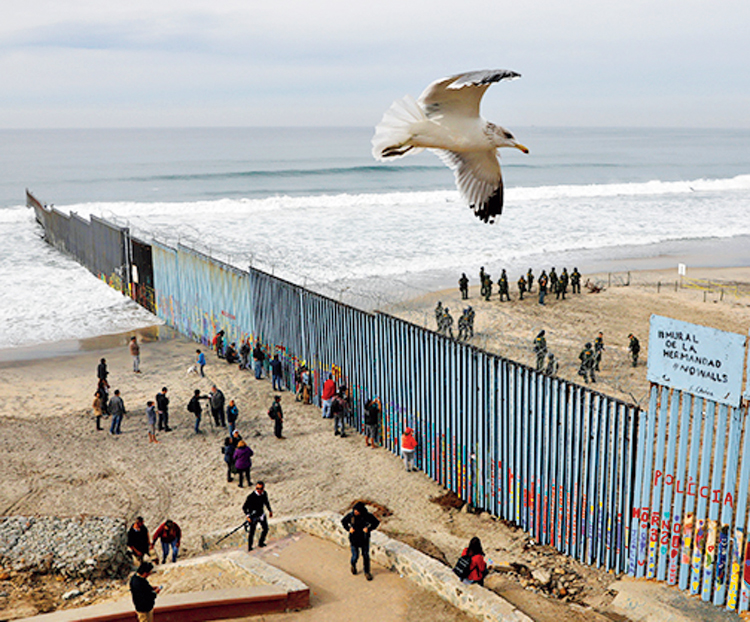 In this December 10, 2018, file photo, people look on from the Mexican side, left, as US.Border Patrol agents on the other side of the US border wall in San Diego prepare for the arrival of hundreds of pro-migration protestors, seen from Tijuana, Mexico.
(AP)
T.C.A. Raghavan   |   Published 17.04.19, 03:05 AM

Two unrelated sets of news stories highlight that even in countries with long established territorial identities, external borders remain arenas of domestic conflict and contestation. The ongoing drama-cum-farce over Brexit has not only given to the border between Northern and Southern Ireland a new prominence in Europe but also raised questions about England and Ireland that many had regarded as finally settled. In North America, Donald Trump’s ‘wall’ to reinforce the border between Mexico and the United States of America similarly suggests that late 19th and early 20th century notions in the US about its ‘manifest destiny’ are being revisited, if not revised.

The emergence of the Irish Free State in 1922 (later to become the Republic of Ireland) was accompanied by the partition of Ireland — Northern Ireland remaining a part of the United Kingdom. The border between Northern and Southern Ireland, however, remained as a contested space between two opposing narratives — of a United Ireland, comprising both the north and south of the island and a United Kingdom, which included the northern part. That the border also ran along a broad Catholic-Protestant division meant decolonization in Ireland was setting the general pattern for British imperial withdrawal in India, Palestine, Cyprus and so on. Within Northern Ireland, the Protestant-Catholic divide reinforced these opposing narratives — one side determined to uphold the border and the other to obliterate it.

These contestations finally came to an end, or so it appeared, in the late 1990s with the Good Friday Agreement between the Irish and the British governments on the one hand and with the feuding political parties within Northern Ireland on the other. A key element of the Agreement was that the border between the UK and the Republic of Ireland — in effect that between Southern and Northern Ireland — became a soft border with no real demarcation on the ground in terms of physical, emigration or customs checks. This essentially bilateral process between the UK and the Republic of Ireland was enormously facilitated by the wider European integration process then under way with both also being members of the European Union.

This supportive framework is now being substantially eroded with the Brexit phenomenon. This focuses attention on borders again: the UK-Republic of Ireland border and the division of Northern and Southern Ireland may now coalesce into a separate identity — with its departure from the EU, this will be the UK’s only land border with it. If Brexit results in a hard EU-UK border, how long can the division between Northern and Southern Ireland remain a soft one? Inevitably how UK-EU relations shape out will impact the divided Irish island. In brief, whether a new phase of Ireland’s history is going to emerge as a result of an unrelated event such as Brexit remains to be seen.

Trump’s wall to secure the US-Mexican border against illegal immigration and drug trafficking represents another manifestation of the persistence of borders in different circumstances. The US-Mexican border emerged in the mid-19th century and the Mexican-American War of 1846-1848. Its length of a little over 3,100 km is roughly of the same order as the India-Pakistan border (3,300 km) but substantially lower than the India-Bangladesh border (4,100 km). Both of the latter have incidentally been substantially fenced for some years now. The US-Mexican border itself has been the subject of a fencing debate for decades — the first fencing of a section of it dates back to soon after the end of World War II. Fencing or barriers on the border are, therefore, not a novelty of the Trump administration.

Possibly the ‘wall’ has acquired a metaphorical quality now for two reasons not directly related to the border. The polarized polity of the US since Trump’s election is one factor. Secondly, fencing and ‘America First’ run against deeply-held notions of the country’s ‘manifest destiny’ linked, in turn, to a constantly expanding external frontier. While the frontier had, in fact, stopped expanding over a century ago, walling yourself in, at least for critics of the president, is a reversion of core American values.

In our own neighbourhood, the Durand Line between Afghanistan and Pakistan is another example of how contested views can be on what constitutes a border and how it should be administered. Afghanistan objected to Pakistan’s entry into the United Nations in 1947 on the grounds that the Durand Line on which Pakistan based its western frontiers was not an international border. The formal objection was soon withdrawn, but Afghanistan’s policy position has remained constant. Even the Taliban regime in Afghanistan did not agree to the recognition of the Durand Line as the international border — the one thing its closest ally, Pakistan, then desired more than anything else.

If the 19th century saw imperial border making with a vengeance, decolonization and independence saw governments severely constrained when they attempted to carry out even minor changes in national boundaries. The case of the Berubari village in Bengal provides a classic instance of this. This village was the site of considerable India-Pakistan diplomacy through the 1950s and also became the cause of major friction between the West Bengal and the Union governments. This border village was described in the textual part of the Radcliffe report as falling in India. The map attached to the report showed it in East Pakistan. The whole village had been in Indian possession since 1947. To rationalize the West Bengal-East Pakistan border, the two prime ministers, Jawaharlal Nehru and Feroze Khan Noon, signed an agreement in 1958. In it, Berubari was dealt with pragmatically and a 50:50 division agreed to. The West Bengal government was to cry foul, alleging that it was not consulted, a charge denied by the Government of India. In any event, Berubari inflamed public opinion in that state and agitations began against the division of Berubari. In the recollection of one participant, Berubari led to shoes being exchanged on the floor of the West Bengal assembly for the first time! The matter finally reached the Supreme Court, which ruled that the Union government had no power to cede territory and for Berubari to be divided to implement the Nehru-Noon agreement, a Constitution amendment would be required. The Ninth Constitution Amendment followed but India-Pakistan relations had moved on to a different trajectory by then and Berubari remained in India. The India-Bangladesh Land Boundary Agreement, over five decades later, finally settled the issue. In brief, all borders have tangled histories.

The fear of foreigners has much to do with Trump’s wall and, although less directly, with Brexit and the re-emergent Irish question. But do borders — whether old or new — separate insiders from foreigners? In a contemporary sense, the answer would be an emphatic yes. But perhaps in a historical sense the answer would be no. The historian, Dilip Chakravarti, of the Vivekananda Foundation of Delhi, takes this position in a recent work on the borderlands of South Asia. In his view, the area between the Oxus and Indus rivers forms “one historical and economic interaction zone”. These are India’s borderlands and Chakravarti’s thesis is that “virtually all the overland ‘foreign invasions’ in Indian history from the Achaemenids to the Mughals emanated from the borderlands of the subcontinent” that were areas very much within India’s traditional geopolitical orbit and, therefore, not “foreign”.