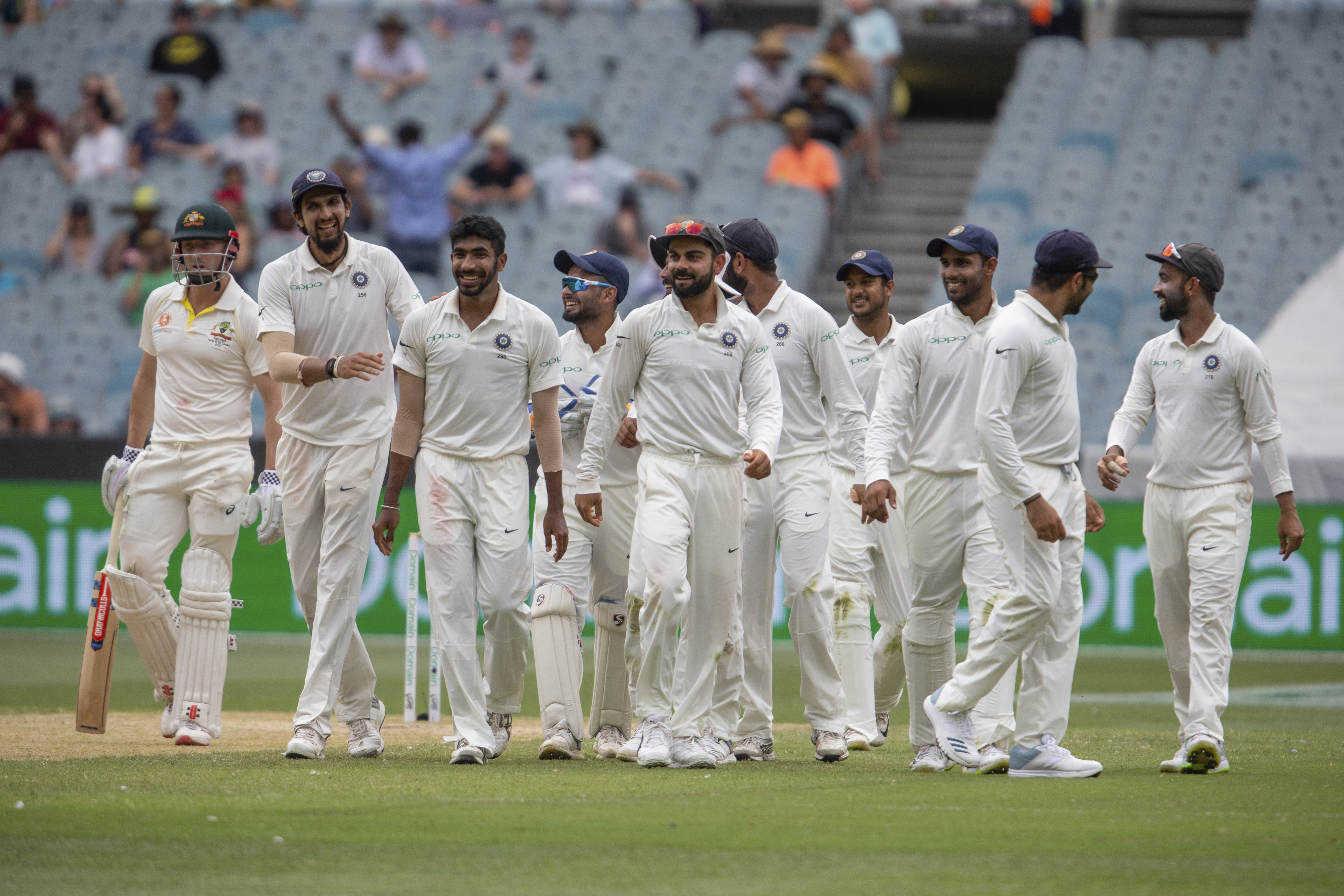 Indian team members walk off the field for lunch, led by captain Virat Kohli, centre, on day three of the third cricket test between India and Australia in Melbourne on Friday, December 28, 2018
AP Photo / Asanka Brendon Ratnayake
The Telegraph   |   Published 10.01.19, 06:09 AM

Sir — India’s 2-1 victory in the Test series against Australia, which ended with a draw in the last Test in Sydney, was exceptional. This is a historic win, for no Indian team has ever won a Test series on Australian soil before. The Indian skipper, Virat Kohli, and his squad have made Indian fans proud. They performed well throughout the series, with Kohli, Cheteshwar Pujara, Rishabh Pant and the debutant, Mayank Agarwal, doing particularly well. With an unorthodox quick-arm bowling style, the young pacer, Jasprit Bumrah — who, with this series, also became the first Indian bowler to take the maximum number of wickets in a calendar year — has proved that he is one of the finest bowling discoveries in Indian cricket. The squad has shown why it is the number one men’s Test team in the world. Performing well consistently will boost the team’s morale for the upcoming World Cup.

Sir — India reached the zenith of cricketing excellence in Sydney with the performances of Cheteshwar Pujara and Rishabh Pant. They put India in a position of strength. Pujara scored 193 runs whereas Pant made an unbeaten 159. Although Pujara missed the chance to score a double hundred, his batting was unforgettable. He played the role that Rahul Dravid and V.V.S. Laxman used to play for India. The team needs one more middle-order batsman with a similar temperament. This is the right opportunity for Pant to take on that responsibility.

Sir — India’s maiden Test series win in Australia should be rated as one of the greatest victories in the history of Indian cricket. When Virat Kohli handed the trophy to the youngest member of the squad, Mayank Agarwal, it symbolized the spirit of the team. While the team as a whole must be congratulated, Cheteshwar Pujara deserves a special mention. His tenacity and cool-headedness were remarkable; he occupied the crease for 1,867 minutes and faced 1,258 balls to accumulate 521 runs in the series. This is an extraordinary feat. He was rightly adjudged Man of the Series. Jasprit Bumrah, too, sent panic waves through the Australian camp.

Sir — The way Virat Kohli led his men to victory in Australia was epoch-making. After consecutive losses on foreign soil, the team learnt how to handle adverse conditions. Cheteshwar Pujara made 521 runs, including three centuries. After years, India’s pace bowling unit triumphed on foreign soil — Jasprit Bumrah stole the show with 21 wickets. The Australian team had not imagined that they would face such a formidable fight in their own backyard. Had rain not played spoilsport, India could easily have won the series 3-1.

Sir — The Indian cricket team’s success against Australia did not come in one day. They worked hard for it. I believe that the Test series in South Africa early last year had a part to play. India lost to South Africa 2-1, but won convincingly in one match, and that showed them that they have the potential to beat teams on foreign soil. Virat Kohli’s leadership also gave the team the strength to remain at the top in the International Cricket Council rankings.

Sir — India became the first Asian team to beat Australia on their own soil. The fact that the Australians are not invincible on their home turf has been proved by a rejuvenated Indian side. The former failed to negotiate the Indian pace and spin attack. The batsmen also rose to the occasion. Cheteshwar Pujara is the new ‘Wall’ of Indian cricket. The pacer duo, Mohammed Shami and Jasprit Bumrah, together claimed 37 wickets in the series. Australia’s batting has weakened considerably in the absence of their star batsmen, Steve Smith and David Warner. Their pace attack also failed to deter the Indian batsmen, even the tail-enders. India, however, should avoid getting complacent and focus on beating Australia in the one-day series as well.

Sir — It was interesting to read about Detectives of Supernatural, the group of youngsters who investigate paranormal activity ('Pink Panthers of the Paranormal', Jan 6). People have always been interested in realms beyond the living world. Some are scared of ghosts, even though I am yet to meet anyone who has had a real encounter with the supernatural. But I have read stories about haunted places, the most frightening being the Bhangarh Fort of Rajasthan. A railway station in Begunkodar, Purulia, is also said to be haunted. If anything conclusive comes out of the investigations of DoS, then their 'bhobishyot' will be very bright.