Advertisement
Home / Opinion / Out of step

STATE OF PLAY | India must ask itself fundamental questions 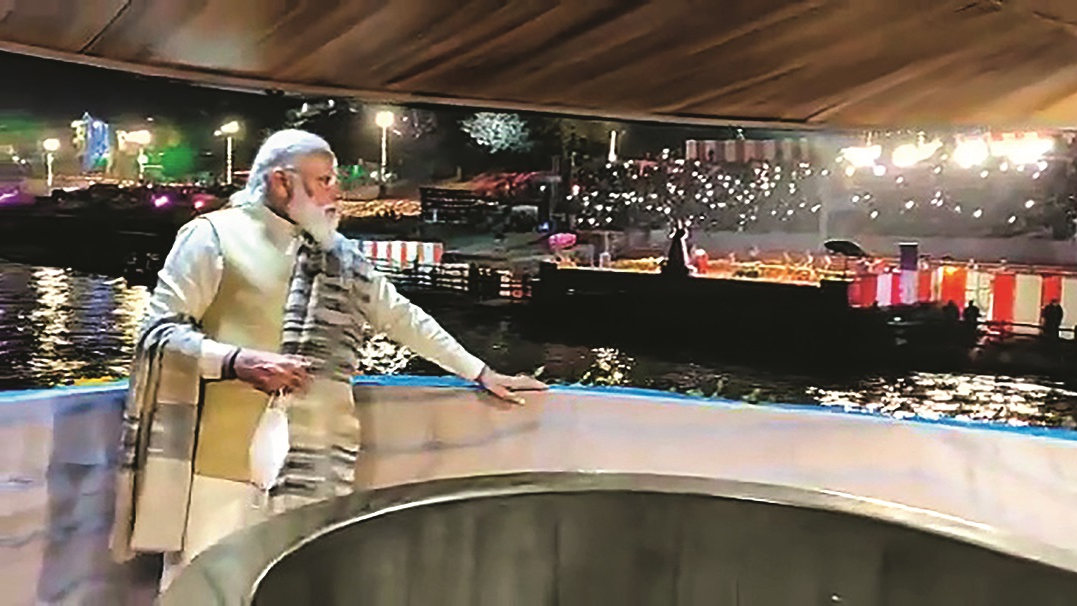 Question: What may be kissed once every while, caressed and sworn by, often be held and photographed as if a trophy, and left to the side only to be arrived at occasionally and ritually? You may wish to ponder, you may well arrive at multiple correct answers.

Meantime, we’ve made progress, and it should get our attention. We have moved from the solitary peacock-peppered majesty of perfumed palace gardens to locations closer to people, so close they appear to be within waving distance. The extravagant Dev Deepavali enactment in Varanasi, the mostly woe-begotten constituency of Prime Minister Narendra Modi, has seduced many descriptions. Sober, or modulated to the timbre of a marauder pandemic and its devastations, cannot be one of them. Nor was it remotely resonant of rites or traditions associated with worship along the holy banks of Kashi. If anything, it had the markings of a belligerent violation of the native elegance of Dev Deepavali, grace and splendour bombarded to bits by dazzle and decibel purchased from merchandisers of kitsch. To call it a son-et-lumière would be to besmirch that description. It was more a nouveau night-clubber’s idea of a jaunt on the river.

But the prime minister’s outlandish ostentation on the Ganga should be deemed only part of the takeaway from the evening, a lesser and insignificant part of it. Style can be subjective; turning out at a summit event in bespoke personalized pinstripes may seem crass to some, classy to others. The message being sent out with in-your-face unabashedness of posture was where the vulgarity really lay.

Covid has claimed close to a hundred and fifty thousand lives. Multiple millions lie afflicted, displaced, deprived of livelihoods, struggling without means to see through the next day. The economy is in alarming contraction. Hardship is mounting and nobody is in doubt that the worst is yet to come. The intimations of gloomier times are widespread and understood enough for even the most blatant and inveterate drum beaters of the regime to stir anywhere near the mention of achchhe din; the promise must seem to them like a ghost in need of exorcising. That the Chinese army waged in and now squats over vast territories we considered our own is no longer in need of attestation or acknowledgement; it is an adverse truth that Modi hasn’t displayed the will or strategy to change. That the farmlands that fill our granaries are aflame over the government’s unsolicited interventions is not some conspiracy cooked up in the back rooms of the Opposition. Chance would be a fine thing if the Opposition was even able. Farmers, possessed of collective native wisdoms accumulated over generations, have smelt a rat in the package being handed out; they fear corporate smash-and-grab. They’ve left home and hearth and have laid siege to Delhi to press for a reversal. They are bivouacked under open skies in the northern winter, being lavished by the government’s propagandists as a league of conspirers.

And what must one call our pradhan sevak tapping feet and fingers to psychedelic strobe beats on a riverfront at such a time? People may some day discover the words and the sentiments to express how it feels to see the prime minister of a nation marooned in darkening deficits out on a garish picnic. It’s an effrontery whose coarseness of quality will take time to make itself felt where it hurts. Sublime disregard should work for lack of a fuller description. He couldn’t care.

But do we care? Or shouldn’t we? We must ask of ourselves questions far more fundamental than the questions we ask of those we elect. Nations, after all, are not creatures of government in a democracy; governments are creatures of nations, they make and unmake governments and, therefore, the responsibility of what a nation becomes must lie with those who populate it. Democracies are not electoral fetes called at designated intervals as handing-over rites; democracies are a consequence of elections and must remain animated between one election and another. Democracies must transcend what happens in elections and the governments that get formed as a consequence. Else, democracies will sooner be dead. Governments don’t keep democracies alive, nations and people do.

We are at a stage in our journey where we must wonder if we even wish to continue as a democracy. The cacophonic rejoicing of bigotry tells us otherwise; indifference to, or silent acceptance of, the methodical demolition of our chosen essentials only serves as endorsement of the undoing of what we set out to be. Do we care that the magical tapestry of our nation is being ripped at the seams? It wouldn’t be quite enough to label Narendra Modi a power-intoxicated authoritarian usurping powers, dismantling institutions, and cynically manoeuvring every lever at his command to disable or demolish what comes in his way. He represents a government, we represent the nation that put him there. It is critical to understand the difference.

But do we care? Do we care how shoddily we have been treated through this calamitous crisis? Shuttered by a firman on a four-hour lockdown notice, commanded to clap and dance and light up, left to our devices and harassed and whipped as we tried to cope in ways we could? Do we care about all this while we have been prescribed counterfeit cocktails disguised as magic potions by profiteer thugs?

Do we care that our fellow citizens have been stripped of their rights, shoved into prison and allowed little recourse? Do we care that the writ of habeas corpus has become what may be called two dead letters? Do we care that our justice system has forgotten how to dispense it? Or dispenses it with audacious partisanship? Do we even care, or know, what it means when the eminences of the highest court of the land blithely pronounce they are trying to curtail the use of Article 32, the arch-protector of the fundamental guarantees we gave ourselves? Do we care what atrocity, insult and humiliation we continue to heap on the people of Kashmir whom we call our own, if only because they come under the sweep of our laws and forces?

Does it strike us that some among us have lynched and killed with abandon and been celebrated for the act of murder? Do we understand the bleak contours of the dystopia we have wilfully arrived in? Where love can been deemed an act of war, dissent anti-national, rape a justifiable resort whose evidence is required to be torched under official fiat, and biryani a weapon of mass destruction? Do we understand the meaning of one of our most powerful and popular corporate houses not being able to sustain an advertisement that celebrates inter-faith harmony? Do we even grasp the connotations of our kaleidoscopic demography? It can fall into beauteous patterns, it can also be brought to shatter and cut. It seldom cuts one way; history is proof, and the future a foretelling.

And, by the way, one of the things that answers to the question posed at the top is the Constitution of India; the clues that give the answers away can be read as the paces of getting discarded. Be well warned.