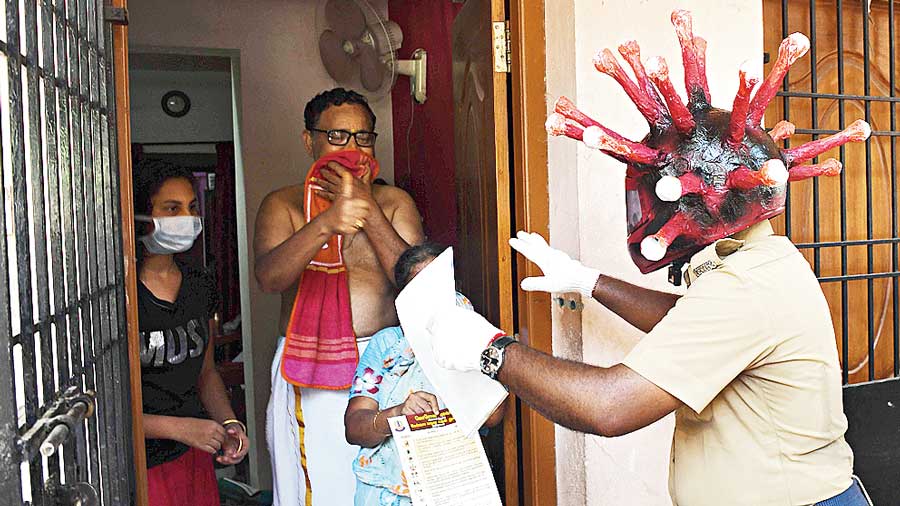 Walking on the roads the other day, I found myself thinking how nothing much seems to have changed from before the pandemic. Now that things have opened up again, Calcutta traffic has reverted to being Calcutta traffic, the honking is still Calcutta honking, the little ponds and puddles on the streets are our usual monsoon visitors, the deposits of wet garbage and leaf mulch still the unmistakable work of the unchanging Art Director in the sky. And, yet, something was different. When I was sitting on the verandah of the club where I’d been invited for lunch, I managed to identify at least one of the things that had changed. Whether on the street or in this privileged enclave, almost everybody was wearing a mask or had one close at hand. There were different styles, of course, with some people making the merest gesture towards masking, with an item hanging off their necks like an extra beard; many others had the protection covering only their mouths, their noses happily pumping aerosols into the air; others sported what one can only can call ‘facial negligees’, as in the flimsiest, most see-through of ‘surgical’ material shimmering across their critical orifices. And yet, compared to the hot season and the monsoon of last year, you actually noticed when someone walked past without a mask. Furthermore, many of the people going maskless had a self-conscious look about them, as if they knew they were doing something wrong, their excuses and defiance ready in their eyes as they waited to be challenged. Maybe just one more deadly wave, maybe something akin to the Uttar Pradesh Pandemocalypse clawing across our society, and even these few non-maskers would shrink in number.

It’s amazing what human beings can get used to. Two days ago, I found myself in a phone conversation with someone who is about fifteen years younger. We were talking about the current travel restrictions and the subject of airport security checks came up. I asked my friend if she remembered the time we could freely carry liquids on a flight. We calculated that this had stopped after the liquid bomb attempts soon after 9/11, so about twenty years ago. “Do you remember a time when one could board a flight without any security checks?” “No, I might have been born already but I haven’t ever taken a flight without a security check.” I tried to remember and I came up, first, with a time when you could still smoke on flights and, then, way before that, when you could just walk on to a plane carrying whatever in your hand luggage. I put airport security checks starting in India just after the bombing of the Kanishka jumbo in 1985, although I could be wrong about that.

Remembering the whole Khalistan mess took me back to the Delhi of the 1980s and the 1990s. Arriving from Calcutta, Delhi felt like it was a war-zone in a different country. The taxi from the airport would be stopped several times by police and paramilitary manning the yellow road-barriers. Some of the uniforms carried serious weaponry and looked twitchy enough to start using them at the drop of a hat. There was no curfew as such, but going from place to place at night involved many such stops, with high-powered torches being shoved into your face as a matter of course. Even after the Khalistan upheavals subsided, this state of siege in Delhi continued well into the 1990s. Visiting Chandigarh was even more startling, with pillboxes, barbed wire and sand-bagged machine gun nests next to important government buildings. It was grim, it was scary, but after the first few visits you started accepting this as the natural order of things.

From the late 1990s, gradually at first, then rapidly, the siege lifted from the minds of the officials and was gone. However, by this time, the seeds of two new competing assaults had already been sown. First, the explosion of construction and automobiles in New Delhi combined rapidly with the pre-winter scrub-burning in nearby Punjab to create a cyclical environmental siege over most north Indian urban agglomerations. Second, the destruction of the Babri Masjid and the growth of Hindutva forces in the north and the west of the country which have eventually brought us to a point where the main threat to the integrity of the Republic now comes from inside the corridors of power in the capital. As a country and a society, we were already struggling to counter these by the time SARS-CoV-2 unloaded its millions of Trojan horses inside India.

Despite the threat of hijackings and liquid-bombs having reduced somewhat, we now accept the checks and restrictions while flying as standard, and also that they are unlikely to disappear in the near future. Similarly, even as the threat from the virus diminishes, we will become used to masking, hand-washing and physical-distancing protocols; some of these will become habits, things that we do without a second thought. But perhaps one of the most important lessons we have learnt from fighting the battles against Covid-19 is about the inter-connectedness of things. Here, for instance, is one string: had China been a democracy with proper official checks and balances and a free press perhaps, the initial spread of the virus in Wuhan (whether from a lab leakage or ‘natural’ mutation) might have been better contained and countered. Here is another one: had the last three successive Indian governments (Atal Bihari Vajpayee, Manmohan Singh, Narendra Modi) concentrated on expanding much-needed public health infrastructure instead of staying addicted to health-destroying notions of ‘growth’, we would have countered the pandemic far better. Here is a third: had this current government focused its attention, just over the last twenty months, on the biggest crisis to hit Independent India instead of trying to stamp down on farmers, activists, dissenters and Opposition political parties, we would have lost far fewer than the lakhs who have died, we would have a far lower number of survivors so badly damaged by the virus, and not so many millions ruined financially. Finally, here is a fourth: not following proper masking and physical-distancing protocols, avoiding the drastic changes in our consumption and transport habits urgently required by an environment in meltdown, and not working fiercely to vote out this incompetent, ignorant and despotic Central government are all lethally dangerous to our individual and national health and well-being.