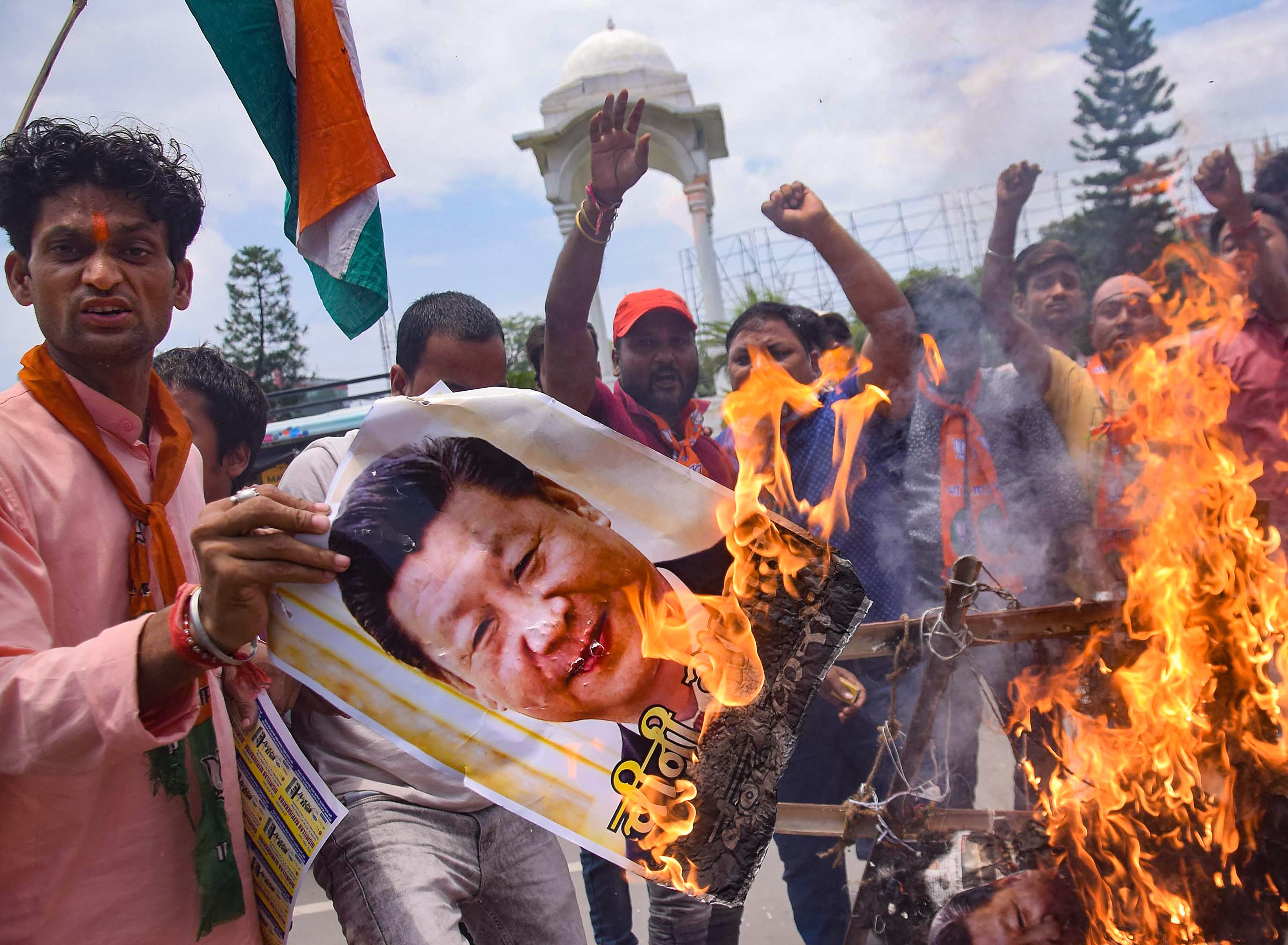 BJP activists burn an effigy of Chinese President Xi Jinping during a protest against the killing of 20 Indian Army soldiers in Ladakhs Galwan Valley by the Chinese troops, in Patna, Sunday, June 21, 2020.
PTI
The Editorial Board   |   Published 27.06.20, 01:13 AM

The rising rhetoric against China after the Galwan Valley skirmish has spilled over into the economic sphere with Indian policy-makers coming under increasing pressure to stop imports of goods and services from the dragon nation. Jingoism has clouded economic wisdom, and the Narendra Modi government seems ready to shoot itself in the foot as it pursues a poorly conceived policy of autarky, which could imperil the country’s brittle economy that is already at grave risk of tipping into a recession. The Centre recently winched up its retaliatory response by making it mandatory for sellers to declare the country of origin of the goods and services that they intend to offer through the government procurement portal. A Make in India filter has been added to ensure that the government and its agencies only purchase products that contain a minimum of 50 per cent of local content. The new measure comes soon after the Centre changed its procurement rules under which it abandoned the practice of global tendering for contracts worth less than Rs 200 crore — a ploy to reserve a big chunk of government purchases for small and medium businesses. The whimsical decision to order the inspection of every single consignment from China and Hong Kong that lands at the country’s ports has created a logjam that can only hurt Indian businesses that depend on critical supply chains.

Reports now suggest that the government is reviewing its decision to allow Chinese telecommunications equipment providers like Huawei and ZTE to participate in the 5G trials. This spells trouble for legacy telecom players like Vodafone Idea and Bharti Airtel, which were planning to test the Chinese equipment along with those from other European and Asian nations. It will not be long before the government cracks down on active pharmaceutical ingredients — drug intermediates used to prepare medicines — sourced from China. There will be more trouble if the policy-makers decide to target electrical machinery and equipment, which accounted for 29 per cent of the total imports worth $62.4 billion in the 11 months of the last fiscal. It is perhaps right to stop the import of low-value products like toys and sports equipment worth $393 million during this period. The clampdown appears to have been extended to Hong Kong as well from where Indian companies sourced goods worth over $15 billion last year. Several federal contracts with Chinese contractors have already been scrapped and could smoulder into legal catfights.

Beijing will, of course, retaliate — and it really has little to lose. India accounts for a little over 2 per cent of its total exports. The Chinese are also moneybags and have bankrolled many projects and businessmen in India. Although foreign direct investment into the country from China has been a piffle — roughly $2.4 billion out of $470 billion that the country received since 2000 — this may actually conceal the real facts. Chinese companies are adept at using the artifice of tax havens to route money into India — and may continue to do so since there is no credible mechanism available to lift the veil on labyrinthine cash trails.