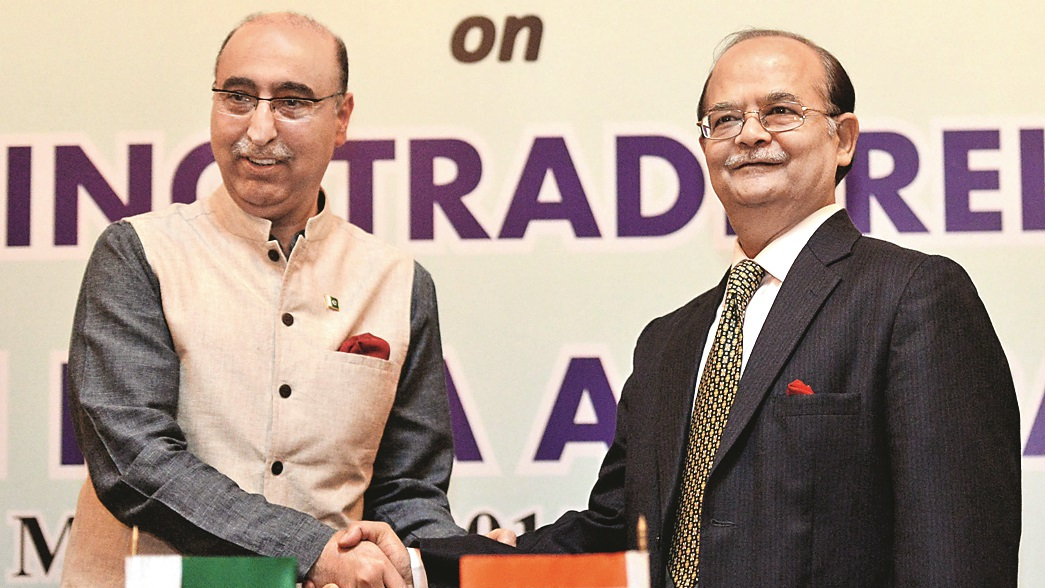 In so adversarial a relationship, there is no sphere of activity left untouched by the impact of India-Pakistan frictions. The recent U-turn by the government of Pakistan on the import of sugar and cotton yarn from India is the obvious example. Trade contestations, however, go back to the founding moments of both countries. Much like the issue of river waters, Kashmir and other territorial issues represented by accession disputes and divergent ideological moorings, trade, too, has been a minefield.

In the late 1940s, amidst the powerful dramas of the Kashmir war, the Partition massacres and disputes over water sharing, numerous tensions over bilateral trade were also seething just below the surface. These erupted into the open in September 1949 when the United Kingdom sharply devalued the pound. Many of its major trading partners and former colonies, including India, followed suit immediately. Curiously, or so it appeared to many in India, Pakistan did not. A major distortion in the exchange rate followed. Raw jute from East Pakistan imported by jute mills in India became much more expensive. Pakistan’s gamble was that it could get additional profits from higher jute prices that India would have to pay. Things did not work out in quite this way, and exports to India fell precipitously along with trade turnover as a whole, with potentially disastrous results for Pakistan’s — especially East Pakistan’s — economy.

However, a quite unrelated factor intervened, almost providentially, to Pakistan’s advantage. The Korean war broke out in June 1950. Jute was suddenly in huge demand, and Pakistan was able to diversify its markets and also make huge profits. The gamble to not devalue had, in effect, paid off because of an unrelated geopolitical event. Perhaps the first but by no means the only time that luck, rather than the right judgment call, had worked in Pakistan’s favour.

Within Pakistan, the handling of the devaluation crisis was viewed with satisfaction: cheaper imports marked the beginning of Pakistan’s industrialization process. Moreover, it showed Pakistan exercising its economic sovereignty in not following India into devaluation. But most of all, it demonstrated that trade would never be absent in India-Pakistan contestations.

For the next half century, trade remained subject to all the vagaries of the India-Pakistan ecosystem restricted by quotas, lists and controls. In Pakistan, limiting trade with India was seen as an essential aspect of cementing its economic sovereignty. The 1965 and 1971 wars led to a nine-year-long trade suspension. The emergence of Bangladesh meant that economic complementarities between India and Pakistan reduced; by the late 1970s, the two economies had drifted apart. There were efforts to expand trade volumes, but the odds were against any substantive increase.

What changed in the 1990s was the new mantra of globalization and the growth spurt the Indian economy began on. As the 50th anniversary of the emergence of sovereign India and Pakistan approached, economic engagement seemed to offer a platform that could help reduce, if not resolve, the enduring political divides. This was certainly the sentiment that was prevalent in India and, to a great extent, there was substantial support for this across party lines. Soon after joining the World Trade Organization, India extended ‘most favoured nation’ treatment to Pakistan — a routine step in international trade at the time, but a significant moment in the evolution of India’s Pakistan policy.

In Pakistan, feelings were more mixed. Some saw the emergent potential of India with its economy opening up. Yet, resistance was fierce, with concerns that larger imports from India would damage Pakistan’s industry and agriculture. Others felt that forward movement on trade unaccompanied by substantial progress on ‘resolving Kashmir’ was a betrayal of Pakistan’s founding principles. Finally, there was a revanchist and ideological position that objected to considering India a ‘most favoured’ nation quite irrespective of the international context in which this technical term was used.

This three-toned alloy of resistance has remained in place for the past quarter-century. It endured in spite of the emergence of the South Asian Free Trade Area agreement, which Pakistan chose not to fully accept. The reluctance to bite the bullet of MFN notwithstanding, trade between India and Pakistan did increase substantially in the first two decades of this century, although it remained far below potential. About eight to nine years ago, there appeared a brief moment when it seemed that Pakistan would finally agree to fully normalize trade with India by treating it the same as other trading partners. This was through the euphemism of ‘non-discriminatory market access’ — MFN treatment without using the ‘most favoured’ word!

Meanwhile, two new grounds of resistance to normalizing trade with India had appeared. The first of these was the growing trade imbalance — Indian exports to Pakistan were six or seven times larger than its imports. For most Pakistanis, this was unfair and reflected market access issues and barriers that their exports faced in India. In this view, in spite of the strong optics that made up the unilateral grant of MFN by India to Pakistan, the fact remained that Indian exports to Pakistan were growing much faster than Indian imports.

The second objection was a more general one, and greatly influenced by the strength of the then prevalent globalization discourse. Pakistan’s market and its geopolitical location offering access to Afghanistan, Iran and Central Asia was, in this view, the prize that India sought. In the late 2000s, there was also a real push from the United States of America for the liberalization of India-Pakistan trade and opening up a South Asian market for Afghanistan using Pakistan as transit. The joke at one stage was that the US government had more people working on India-Pakistan trade than the governments of India and Pakistan had, put together. The view gained ground in Pakistan that the ‘wily Indians’ with a western concert to back them were extracting something very valuable, the importance of which ‘simple Pakistan’ was unable to gauge. Highly inflated estimates of the potential of India-Pakistan trade if restrictions were removed added to these concerns. Therefore, for Pakistan to ‘give’ on trade without getting something in return was seen as naïve, and the question became a larger one of the concessions that Pakistan must seek. These new perceptions entered and strengthened the old alloy of resistance further.

In the recent U-turn with regard to the import of sugar and cotton yarn from India, it is possible to see the imprint of these old debates. Nevertheless, the situation has changed a great deal. Pakistan banned all trade with India post August 2019 as a response to the legislative changes in Jammu and Kashmir. India, after the Pulwama terrorist attack, had withdrawn the 1996 MFN treatment given to Pakistan. Yet, there are differences from the trade stoppage of the 1960s and 1970s. Formal channels of trade are now supplemented by others. In spite of the ban, trade through third countries continues and even grows. This ‘open secret’ reveals much of India-Pakistan relations. What it also suggests is that the current setback notwithstanding, with incremental improvement in political atmospherics, the trade agenda will resurface again in some time.

The author is a former high commissioner to Pakistan and is currently Director General, Indian Council of World Affairs