Remembering is never an easy thing to do 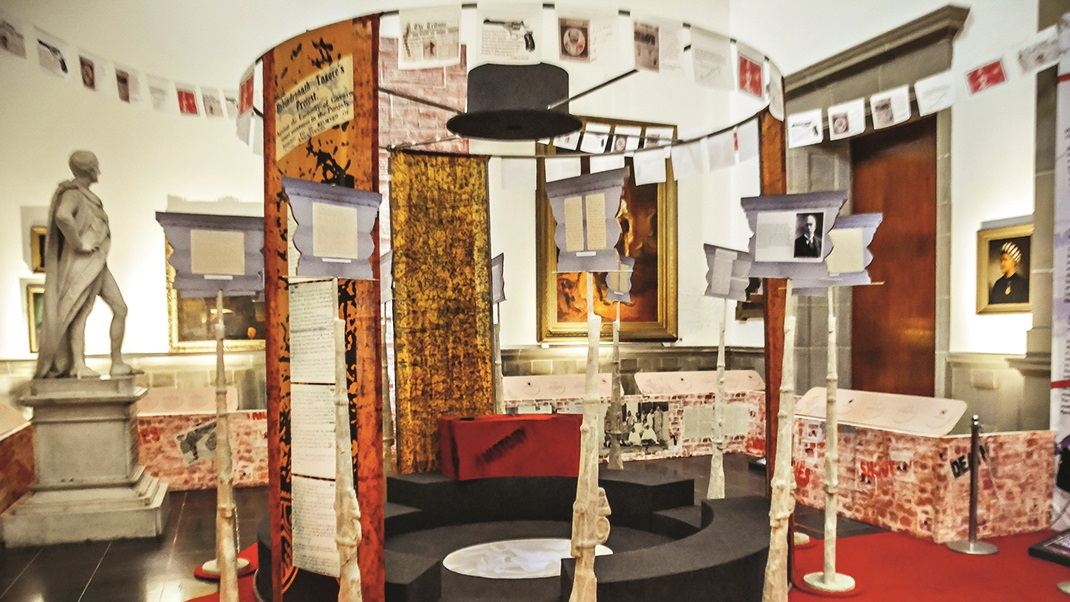 A photograph from the exhibition/installation, Ways of Remembering: Jallianwala Bagh and Rabindranath Tagore’s Response to the Massacre, held at Victoria Memorial Hall.
Credit: Md Shahnawaz
Samantak Das   |     |   Published 22.10.20, 12:34 AM

The perfectly normal process of getting to know another person is something each one of us has done hundreds, if not thousands, of times in our life, and a lot of it has to do with trying to discover if there are things about the other human being that we can relate to, or identify with, or enjoy, in short, trying to figure out who that other person is. Much of this process is, so to speak, midwifed by memory, which is also something we tend to fall back upon when trying to let someone else know who we are. The English philosopher, John Locke (1632-1704), put it rather neatly in An Essay Concerning Human Understanding (1689): “to find wherein personal identity consists, we must consider what person stands for;- which, I think, is a thinking intelligent being, that has reason and reflection, and can consider itself as itself, the same thinking thing, in different times and places; which it does only by that consciousness which is inseparable from thinking, and, as it seems to me, essential to it: it being impossible for any one to perceive without perceiving that he does perceive... For, since consciousness always accompanies thinking, and it is that which makes every one to be what he calls self... in this alone consists personal identity, i.e. the sameness of a rational being: and as far as this consciousness can be extended backwards to any past action or thought, so far reaches the identity of that person; it is the same self now it was then; and it is by the same self with this present one that now reflects on it, that that action was done.”

This “extend[ing] backwards to any past action” in order to create, or confirm, or justify identity is something that is as true for the collective as it is for the individual human being. Yet, identity — as we know — is never simple, never something that can be “formulated, sprawling on a pin”, as T.S. Eliot put it; it is shifting, capricious, and needs to be constantly renewed if it is to be of any use. Important historical events, which have shaped the identity of a nation, or a people, or a community, need this constant interplay between what that nation/people/community is now and what it was then, when the event occurred. The consciousness of the collective is crucially dependent on how far back it can reach, how much it can remember, for, in a very real and fundamental sense, we are what we remember — but remembering is never an easy thing to do.

These reflections were triggered when I recently had the opportunity to visit the site-specific installation/exhibition, Ways of Remembering: Jallianwala Bagh and Rabindranath Tagore’s Response to the Massacre, at the Portrait Gallery of the Victoria Memorial Hall, which had been inaugurated on March 2, 2020, but shut down shortly thereafter as a consequence of the Covid-19 pandemic. Conceptualized, researched, and curated by Sarmistha Dutta Gupta, and given palpable form by the show’s artistic director, Sanchayan Ghosh, Ways of Remembering gives one an immersive experience of the massacre before, during, and after Acting Brigadier-General Reginald Dyer ordered his troops to open fire on an unarmed crowd of children, women and men at the Bagh on April 13, 1919, killing at least 379, and injuring some 1,200 others. Using an eclectic array of techniques and incorporating documents, recordings (both audio and video), light, sound, shapes, forms and objects, the installation/exhibition invites the visitor to see for himself/herself not just what Jallianwala Bagh was then, and what it came to mean for the later history of the struggle to throw off the colonial yoke, but also to reflect on how an oppressive State justifies the murder of citizens in the name of maintaining law and order.

In an act of profound, almost poetic, subversion, Ways of Remembering was designed such that none of the original exhibits of the Portrait Gallery — including paintings and larger-than-life sculptures of British nobility on raised plinths — had to be removed or shifted; instead, they were made part of the free-flowing, interactive process of the installation/exhibition itself. Showing “one of the worst atrocities in the global history of empire” in a grandiose edifice “originally designed by Lord Curzon to be a museum that could showcase the ‘achievements of the empire’”, as Jayanta Sengupta, secretary and curator of the Victoria Memorial Hall, puts it in his note to the catalogue of the exhibition took courage, not least because Ways of Remembering makes pointed reference to subsequent incidents of brutal State oppression of peaceful dissent.

To try and describe Ways of Remembering in words is doomed to failure because the installation/exhibition quite literally envelops the visitor, from the huge blood-streaked map of undivided Punjab underfoot, to the vast flickering images projected on the wall, to the sounds that play on strategically placed speakers, to the charpoy with quotations from diverse sources woven into it (on which visitors can sit if they so desire), to the huge tapestry with the names of the massacre victims embroidered on it hanging above the entrance to the Portrait Gallery, to the monitors playing videos made specifically for the occasion (comprising interviews with scholars, the tour-guide of the Jallianwala Bagh memorial, members from the families of those who did or did not survive the massacre, and so on), to much else that I could not take in even though I spent several hours savouring the cornucopia of riches that make up the installation/exhibition.

Rabindranath Tagore looms large, of course, and not only because of his letter of May 31, 1919, to Lord Chelmsford, the viceroy of India, renouncing his knighthood, where he had declared his “wish to stand, shorn of all special distinctions, by the side of those of my countrymen, who, for their so-called insignificance, are liable to suffer degradation not fit for human beings”. Visitors are also shown how Rabindranath had actively campaigned when visiting London the year after the massacre to keep alive the memory of the horror of Jallianwala Bagh among the ordinary public and members of the British Parliament. Perhaps more pertinently, the installation/exhibition reminds visitors that Rabindranath had not been in favour of erecting a memorial at the Bagh, as had been proposed by Gandhiji and the Congress in early 1920. As Dutta Gupta puts it, Rabindranath “disagreed with the idea of monumentalising memory and not with the idea of remembering per se”, something which inspired her to put together an installation/exhibition that would become “a facilitator for dialogues and exchanges that... stimulate reflections on the politics of memory”.

The ongoing Covid-19 pandemic has deprived us, both as individuals as well as members of larger collectives, of much that is valuable, and I mourn the fact that this remarkable display will have been dismantled by the time you read this. However, efforts are on to try and preserve at least a part of Ways of Remembering in digital form, and one hopes that such a virtual afterlife will stimulate the kind of reflection and dialogue that its creators had hoped to stimulate, given especially that other Baghs are now crowding into our collective consciousness.