Advertisement
Home / Opinion / In defence of the dogs and crows

In defence of the dogs and crows

Animals rule physical and mental spaces: to kill them or not would always be a complicated question 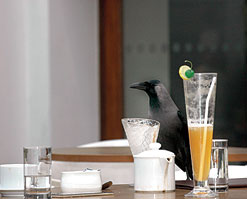 Though they have been a part of everyday life since at least the time of the Mahabharat, India's dogs have recently become an object of popular hysteria and organized killing. "First of all one needs to have love towards fellow human beings," said the bravely pro-human Kerala government minister, K.T. Jaleel, a prominent defender of the state's new effort to cull all feral dogs. Since the canine killing of one woman in Thiruvananthapuram, a human-versus-dog mentality has taken hold of many in Kerala's press and civil society. As one local doctor explained to NDTV, "Earlier isolated cases of a single dog biting or scratching used to come up. It was largely an accident. Now we hear of pack of dogs targeting humans."

Keralites are not the only ones prey to such feverish allegations. In 2012, The New York Times published an article titled "Where Streets Are Thronged With Strays Baring Fangs" in which its reporter claimed that India's "free-roaming dogs number in the tens of millions and bite millions of people annually, including vast numbers of children," leading to the death of "an estimated 20,000 people... every year from rabies infections." How have we coexisted for so long with these unrepentant murderers?

In fact, the very year of the Times article, only 212 deaths from rabies were reported; according to Krithika Srinivasan, a Lecturer in Human Geography at the University of Edinburgh, the "estimated" figures are based on extrapolations from real data that depend on several questionable assumptions, for example about the number of stray dogs. Along with alarmist statistics about dog bites, the rabies figures also fail to draw a distinction between stray dogs and pets, even while the rate of bites by pet dogs is generally higher than that of strays. As for the threats stray dogs do rarely pose, neutering and vaccinating have resulted in fewer and safer dogs in Jaipur and Chennai. Culling, on the other hand, tends to create an ecological niche to be filled by other, nearby groups of dogs, or by rodents unburdened of potential predators.

Contrary to what is commonly supposed, Indians have reason to be grateful for their urban street animals, whose two principal species, the house crow and the pariah dog, are both indigenous to the country. Crows, for example, consume insects, carrion, trash, and sewage. Dogs also help dispose of the tons of waste that accumulate on city streets.

Both animals possess a character and dignity worthy of our respect. Calcutta's dogs may be among its most civilized residents. They tolerantly sleep through the chaos of Central Avenue and Rash Behari, streets whose open markets cause normally polite humans to shove and shout. By nature nocturnal animals, the dogs considerately wait to go about their business until most sentient beings have gone to sleep. Fruitsellers slouch, chaiwallahs slump, bus conductors crouch, but street dogs have a strikingly elegant and attentive posture. Most salaried Calcuttans hurry through their commutes and errands; the dogs have a flâneurial tendency to wander through the city, pausing at the various sights and smells that interest them.

The crows lack the dogs' gentility, but boast a hustler's intelligence and chutzpah. Uniquely among birds, corvidae have been observed fashioning hooked tools and storing them carefully for future use. Many dogs are battered by street life; the canny crows exert dominion atop Calcutta's trees. When Mark Twain visited India, he was delighted by the house crow's wiles, comparing the bird to "a gambler, a low comedian, a dissolute priest, a fussy woman... a wallower in sin for the mere love of it... He does not know what sorrow is, he does not know what remorse is; his life is one long thundering ecstasy of happiness."

The most typical source of human ire towards street animals may be their idea of fun. Nagging dogs, for instance, are not after food or blood so much as a good time, and when the car or pedestrian they are pursuing halts, they tend to get bored and saunter off. Crows relish biting the tails of dozing cows, shrieking at birds of prey, and stealing cigarettes. Given the many ethical ways of reducing the threat stray animals infrequently pose, we need not punish them for annoying us, and enjoying themselves, with murder.