In an increasingly hostile environment, how do photographers in India find ways to negotiate space and access stories? 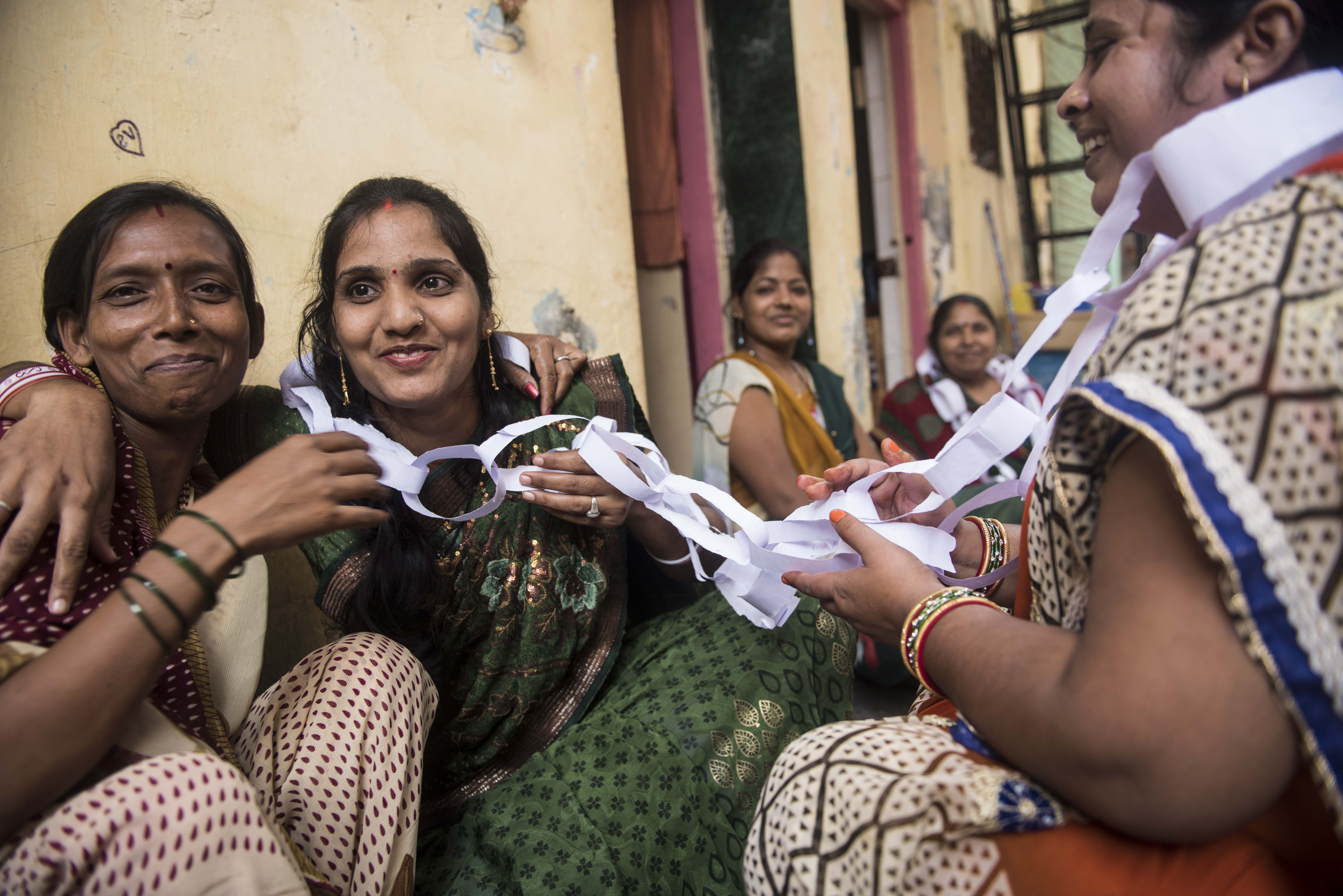 Shooting for an NGO in Dharavi, Mumbai, it was easier as a woman photographer to access spaces in homes and at community gatherings where women felt comfortable enough around an outsider to truly let their guard down.
Photo by Tejal Pandey / SNEHA
Tejal Pandey   |   Published 02.12.18, 05:35 AM

They were just doing their job

The Shakti Mills case of 2013 is a prime example addressing these complexities. The brutal assault on two young photojournalists pursuing a story, in broad daylight by a group of delinquents in the compound of a defunct textile mill, challenged the very idea of Mumbai as a safe city for women and photographers. One question that came up again and again amid the speculation in the aftermath of the incident was: Why did the women venture into a derelict, deserted area in the first place? The implied obviousness of this ghastly outcome of a foolhardy decision felt almost accusatory. This pushed the burden of the blame in the direction of the victims rather than of the perpetrators. As the case unravelled, news that rag-pickers in the vicinity had been similarly assaulted came to light. No photographers these, nor artists either. One couldn’t help wonder where these poor souls went wrong. What worlds of imagination were they lured by? What thirst for creativity had led them on? The answer was plain as day. Like the photographers, they were simply doing their job.

The minor found raped and murdered in January in Kathua district, Jammu and Kashmir, was also picked up from a place that to her was familiar work-space. A forest close to home, where she took her horses grazing every day.

Hashim Badani, who focuses largely on travel and fashion, took time off to pursue a personal story that was later published in Slate, UK. Accompanied by a fellow journalist and friend, he spent 15-odd days in various camps in the Narwal area in Jammu, documenting the Rohingya settlement there.
Photo by Hashim Badani

Working with a creative fiction approach to documentary photography, Sharbendu De often uses local legends to construct layered images. Shooting in volatile zones, De has had several brushes with danger, like being mugged and assaulted in Kathmandu while covering the 2015 Nepal earthquakes or facing the threat of being kidnapped while shooting in Palhallan, Baramullah district, during the Kashmir floods in 2014.
Photo by Sharbendu De

One might chuckle, smirk or yawn, but these are real fears photographers face when out on the job. And perhaps the sooner we acknowledge them, the faster we can negotiate our way around it. Asthana believes people are both predators and victims, and continues traveling alone, “keeping a good faith in humanity”. Badani, on the other hand, says that spending ample time with his subjects is a sure way to break the ice. His advice: “Never refuse a cup of tea or invitation to break bread with someone. You shut yourself to a whole world of experience like that.”

In a country like ours, it is impossible to ignore that primary element of segregation – caste. One’s level of immunity or access is often defined by one’s religious background. Photographer Hashim Badani, who recently worked along with a colleague on a story on the Rohingya community settled in Jammu, says he felt like they were being watched at times. Often, if he finds himself in a vulnerable situation, he uses a pseudonym as a clever evasive tactic. But bizarre incidents – like being “arrested on suspicion of murder while shooting a story for Top Gear in Sewri on Port Trust land” – have convinced him to choose to shoot with permits.

Tejal Pandey is a Mumbai-based photographer and writer

But where male photographers risk getting mugged and beaten up, with women the violence inflicted is almost always sexual. Asthana has learnt to avoid shooting in mass gatherings after an unpleasant incident in Uttar Pradesh, and Narain has had to deal with late-night phone calls from “supposedly respectable, married men asking to meet up etc” once they got hold of her number. As Narain says, “A lot of people feel that safety issues only occur in areas where there may not be financial or economic security, but that is a myth propagated by the privileged.”

Often, places come with their predesigned personalities and one is expected to work one’s way around these presets. For a young Mumbai-based photographer who recently moved house to work at a leading newspaper, a change of cities meant a change in her shooting schedule. “I can roam around in Mumbai all night and not care, but in Delhi I have to constantly look at my watch after a certain point of time”, she says. This gender-specific restriction on the freedom of movement is not just physical but also psychological, as one automatically evades the thought of exploring ideas that do not fit into the stipulated, safe time bracket.

Access to spaces comes coated with conditions and stories turn slave to time. The artist as explorer is transformed into a soldier armed with pepper spray and other precautionary measures. But then sometimes, it is precisely one’s gender that opens doors to worlds that might not otherwise be accessible. “As women I have realised a lot of people find us approachable. So I have learnt to use that to my advantage,” states a photographer who has shot extensively in the women’s coaches of Mumbai’s local trains copiously, exploring that space in relation to women commuters.

Photographer Dayanita Singh once said, “Reality is photography’s biggest burden.” For a medium best known for helping document events for posterity and eternalising moments in history, this deduction seems contradictory. How can reality be a burden when photography sets out to capture exactly that? As proof, as evidence, as a record of what took place, a study of the history of photography shows, that it developed more out of its usefulness, its relation to memory and as a tactile, precise proof of existence. But the photography that Singh refers to is miles apart from this utilitarian definition of the practice. Her version is one where images are used as artistic expression, as links holding together a story or as an experience. Where a photograph of a pen on a table is definitely a photograph of a pen on a table, but it is also so much more than just that.

Good images transport the viewer to someplace else or act as an egress to something else. If painting holds the power to stir an emotion within the viewer, so does photography. Quite like Surrealist artist René Magritte’s famous work, “The Treachery of Images”, where an image of a thing is not necessarily the thing in itself, what one photographs and what one writes could be mere allusions of the original content in question. As an artist, one is meant to be gifted with a unique perspective. The more differently one sees things, the greater an artist one is perceived to be. But to constantly do that, artists and writers need a vacuum or a zone to retreat into. A temporary world, this mind-space, exists only in the artist’s head.

Familiarity can only go so far

So how does one really define safe zones then? Veteran photographer Ashima Narain says: “I am deeply concerned for my safety, and I am also concerned in the safety of others – and that is why I do a lot of human interest stories – to try to build awareness about other people’s spaces, how they negotiate them for political, social, economic and personal safety and stability.” As someone who shoots extensively for non-profits across the country, she makes sure she’s always accompanied by a local, so she doesn’t feel like an outsider or “the other”.

But what does someone trained to live in this illusory realm find beyond it? In the clash of the real and the imagined, attaining a balance does the trick. Often the dilemma one grapples with is to navigate the real world while nurturing a delicate inner world. Unlike film-making, which usually relies on teamwork, or writing, where solitude is self-induced, photography falls into strange territory where the photographer operates between two worlds simultaneously. It is where place and space collide, in which place refers to a physical address, while space is the framework etched out by the artist within which to work. But beyond logistics and production work, there are other concerns that photographers out in the field need to resolve.

From villages high up in the Himalayas to the near-abandoned sea town of Dhanushkodi in South, Deepti Asthana travels solo, spending days with the locals in their space, getting to know them better, so as to get as close to the source as possible.
Photo by Deepti Asthana

Echoing Narain’s approach is photographer Deepti Asthana, who traveled to the Gurez valley in Kashmir to shoot earlier this year. Her local contacts, established either before or after reaching a place, become the “backbone for any project,” taking on multiple responsibilities that included figuring out transport, help with translation, and security. Accessing a place through an insider is key to getting under the skin of a story.

But familiarity can only go so far. Even press cards, which are often some assurance of safety or entry to places, can become the very cause of trouble, or just plain useless. Take the case of Delhi-based photographer Sharbendu De, who was forced to remain undercover for days while documenting the Lisu tribe in Arunachal Pradesh, for fear of being found out by heavily armed militants. He says, “Deep inside the forest, with no police or military around, no phone network to reach or scope to communicate with anyone – one’s vulnerability increases multifold in such unadministered spaces.” In conflict or disaster zones especially, the artist in pursuit of the image might be operating on a level far removed from the perils of her immediate surroundings, making him or her most vulnerable.