In a free fall

Unlike 2013, the pressure on the rupee will endure 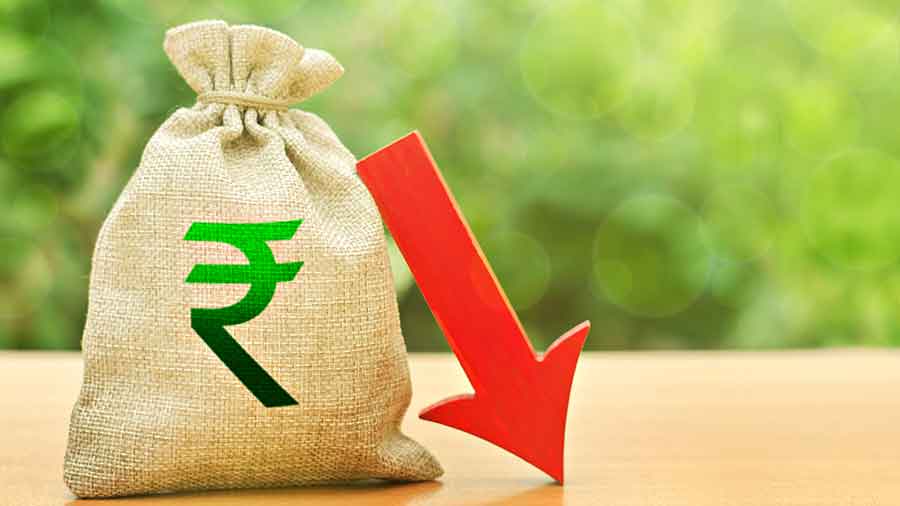 This month, the rupee’s weakening trend has occupied our attention. Media reports have relentlessly focused on its fall to a ‘lifetime-low’ on a daily frequency. The authorities, on their part, have centred on measures to ease the mounting pressures up on the currency. Memory of the 2013‘taper tantrum’ is fresh in minds and has spurred a series of actions to prevent a potential crisis from brewing. No two macroeconomic contexts are ever identical however,even though past lessons are invaluable.The outburst in 2013 was short-lived amidst severe domestic imbalances. 2022 is about the repricing of rates in the wake of high inflation, high indebtedness across countries, the growing threat of recession and related disorderliness;it also follows a pandemic shock.It is long and messy sailing in uncharted waters without a weather guide. A quick or early respite is unlikely. Best to gear up for the long haul and gradual rupee adjustment along with.

The currency pressures have been continuous, several, and intensifying.These are a combination of external forces and evolving domestic balances. Global risk has been escalating for many months, more so since the Russia-Ukraine war.International capital flows, which respond to risk sentiments and relative returns, have reversed from emerging markets towards the safe haven of the US dollar, pushing up its value and depressing that of others,including the rupee. A widening interest rate gap between India and the United States of America is weighing in. A strong dollar and rising US interest rates have often triggered economic crises in developing countries. These forces will endure as the high US inflation shows no sign of peaking; further and aggressive tightening is likely. There’s little foresight about the future path of US interest rates; speculation abounds, increasing volatility in asset prices.

Domestically, external account imbalances have been building up. Net portfolio outflow since last October totals $36 billion, with $6.6 billion exiting last month alone.This has contributed to a capital account shortfall. At the same time,the gap in foreign trade has opened up — costlier energy and commodity imports are major factors but gold imports shot up to $6 billion in May, indicating domestic investors’search for better returns with stocks falling and negative real rates on bank deposits. The recent slowing of export growth has added the stress upon trade balance.

The Reserve Bank of India has leaned against rupee depreciation pressures with regular intervening sales of foreign currency. Until now, about $62 billion of gross forex reserves’ stock, which was at a $691 billion peak last October (including forward position of $49 bn), has been expended; including forward intervention, $41 billion were used up to May when $1.2 billion were sold in the futures market as well to support the currency. The central bank’s exchange rate management has moderated the pace of decline— the rupee has lost about 5.5% of its value from end-March, and nearly 7% in 2022 — according to changing conditions. The policy rate has been raised twice to 4.9%, but it still remains well below the rate of inflation(7.01% in July).However, with general price growth exceeding 7% monthly since April, the depreciation-inflation linkage is a big concern. Currency depreciation aggravates imported inflation, worsens the external position,potentially instituting a downward spiral. Data show that the RBI sold $11.1 billion in the fortnight to July 8 while the rupee depreciated 1.2% in the period. This testifies to the immense pressure upon the currency.It also sheds further light on the series of measures this month to fortify the external position and stabilise the currency. On July 1,the government increased customs duty on gold by five percentage  points to restrain import; on July 6, the RBI relaxed regulations to attract foreign debt capital — raised interest rate cap on non-resident Indian deposits, doubled foreign borrowing limits for resident companies for limited time, and widened the offering of government bonds for foreign investments; and last week, a framework for rupee invoicing and settlements of exports-imports was introduced.

Given India’s fast rising imports of Russian crude oil, fertilisers and so on, local currency payments aim to take out some dollar demand from the forex market but the extent remains to be seen. Gold imports have been rightly restricted in time: in 2013, these were at the core of the widening current account deficit and curbs were delayed. The steps to encourage foreign capital haven’t excited inflows so far — existing sovereign bond investment limits for foreigners are still unutilised, the cost difference is unappealing for domestic firms to take overseas loans,and non-resident Indians eschew a depreciating rupee (unless offset by additional returns, for example,in 2013, the RBI bore the exchange risk). Such foreign capital is driven by risk sentiments and cross-country differences in interest rates and growth, indicating poor prospects in the near future as well.

Perhaps the rapid decline in reserves along with mounting exchange market pressures motivated the spate of actions that betray some nervousness. They haven’t made any difference to the rupee’s downward incline, which persists.The point is that several forces impacting it are fundamental changes.Others, such as the strengthening dollar, rising global interest rates and oil prices, are exogenous and unstoppable. Under the present circumstances and those likely to evolve in the foreseeable future —tightening interest rates and global liquidity, economic slowdown, financial volatility, possible turbulence from debt defaults — the key domestic variables will undoubtedly be affected with consequences for the exchange rate. For instance, export performance could weaken, external financing become very costly— even difficult — global financial shocks become more severe or dominant,to cite a few.

It is apparent that the world economy is significantly different in 2022 than it was back in 2013.Acting in advance to avert a potential taper tantrum may not be an adequate safeguard against currency weakness as there are real transition sat the heart of it all. Such realignments are stretched and, in an interconnected world, unsystematic,not the least because of preceding monetary and fiscal excesses. If the exchange rate drifts downwards in the process, the best course is to allow adjustment in line with its vital determinants, including external conditions; even the choice to keep domestic interest rates low is likely to be constrained. The RBI has been navigating this course appropriately until now. The challenge is to retain market confidence and not ruffle sentiments for an uncertain and indefinite period.