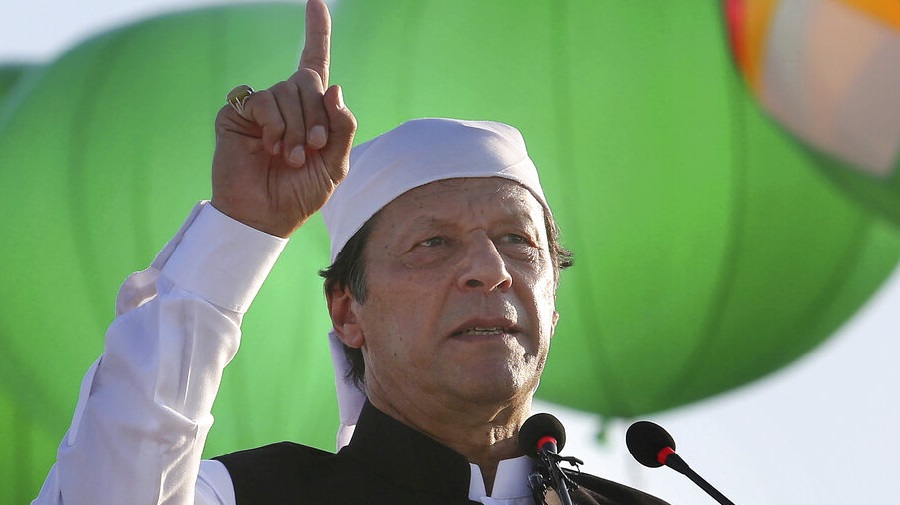 Prime Minister Imran Khan made international headlines last week but for all the wrong reasons. Khan made a surprise appearance in the National Assembly on Thursday to defend his government’s overall performance. Explaining the success his government has achieved in foreign policy, especially in the relations between the United States of America and Pakistan, Khan talked about the Abbottabad raid in which the al Qaida chief, Osama bin Laden, was killed.

“I will never forget how we [Pakistanis] were embarrassed when the Americans came into Abbottabad and killed Osama bin Laden, martyred him,” Khan said, while calling bin Laden ‘shaheed’. It was bound to make headlines. When the prime minister of Pakistan makes a statement on the floor of the House, it is considered a policy statement. Some ministers from the Pakistan Tehreek-e-Insaf were quick to call it a ‘slip of tongue’.

The Special Assistant to the Prime Minister on Political Communication, Shahbaz Gill, tweeted a clarification: “Referring to PM’s speech in NA today, it is clarified that PM twice used the word ‘killed’ for OBL. An unwarranted attempt is being made at home/abroad with a clear intent to make his remarks controversial unnecessarily. PM’s and Pakistan’s commitment against terrorism is unwavering and our track record in eliminating this menace is better than anyone else in the world [sic].”

The Opposition took on the prime minister  hands on. From the Pakistan Muslim League (Nawaz) leader, Khawaja Asif, to the chairman of the Pakistan Peoples Party, Bilawal Bhutto-Zardari, the Opposition did not let Khan off the hook on his controversial remarks. Bhutto-Zardari tweeted: “PM IK calling OBL a martyr in NA is consistent with his history of appeasement to violent extremism. It is during his govt that those involved in APS attack ‘escaped’ & those involved in Daniel Pearls murder get relief. Running with the hare & hunting with the hound [sic].”

Well, this controversy may pass too, as it is not the first time that the prime minister has said something controversial and/or inappropriate, but there are other things at hand that he must address first. While he may be satisfied with his government’s performance, that is not what all his party members are thinking.

Recently, the federal Minister for Science and Technology, Fawad Chaudhry, made quite a stir by giving an interview to VOA Urdu. The interview was conducted by the renowned journalist, Suhail Warraich, who has a knack for asking hard-hitting questions in a rather innocent manner. Chaudhry discussed many things, including the infighting among senior leaders of the PTI, which led to the elected members being sidelined, thereby leading to the entry of non-elected members into the cabinet. One of the most important points he made was about the parliamentary form of democracy and how Pakistan is moving away from it under his own government owing to non-elected members being part of the decision-making process rather than just being there as ‘experts’. He lamented how elected members of parliament were being kept away from key decisions. While Chaudhry maintains that Khan is the best option out of the current political lot, his disappointment over how the government is being run was quite clear.

Chaudhry is not the only one. Some others from the PTI have also voiced their concerns about the government’s non-performance. In Punjab, the chief minister, Usman Buzdar, seems to be the problem, while at the federal level, the government’s economic woes continue to grow. Pakistan’s economy was already going through a rough patch but given the negative impact of the coronavirus on the global economy now, Pakistan will see a negative growth rate.

The Opposition is being hounded by the National Accountability Bureau, which is seen as a tool for political victimization rather than any real accountability. In spite of the arrests of several top Opposition leaders on the basis of allegations, nothing concrete has come out of these cases so far.

The government is also facing some problems at the hands of its allies. One of its smaller allies in the Centre, the Balochistan National Party (Mengal), quit the government recently owing to unfulfilled promises. The PTI is trying to pacify the Baloch nationalist party, but it remains to be seen if the BNP chief, Akhtar Mengal, would change his stance. Add to this a global pandemic that the government has so far been unable to handle properly, and you have the perfect recipe for a disaster-in-waiting. The number of coronavirus cases is almost 2,00,000 with more than 4,000 deaths. Selective lockdowns have been imposed in several cities owing to the exponential growth of Covid-19 cases. People are not following standard operating procedures on account of the government’s confused messaging about the seriousness of the coronavirus when the pandemic began. Now, in a way, it is out of the government’s control as well. We can only hope that the projected rates are wrong.

The judiciary, too, is asserting itself. Some of the recent cases picked up by the judiciary led many to say that it was positioning itself as a second establishment. Maybe that is why a presidential reference against Justice Qazi Faez Isa, a sitting judge of the Supreme Court, was filed by the government. It took more than a year, but the reference was finally quashed by a ten-member bench of the apex court. The said reference was seen as being mala fide by many since it pertained to the assets of Justice Isa’s wife, who is not a dependent of the honourable judge. Some say the government misfired in this case. Whatever its reasons for sending the reference, the government certainly does not need an alienated judiciary at a time when it is already facing a plethora of problems.

Once again there is talk of a ‘national’ government — an interim set-up of sorts with people of all political parties on board so as to stabilize the situation. We have heard of a national government in the past as well, but did not see it materialize. There is one difference, though. In the past, the national government that was discussed was more of a technocratic set-up, but this time around, we hear of a consensus national government. Whether there will be any takers from the Opposition — the PML-N and the PPP — remains to be seen, but rumours abound that some people are busy ‘auditioning’ for key positions if there is an in-house change.

Of course such rumours are always doing the rounds, especially if a weak coalition government is in power. Some say it all depends on how the government handles the Covid-19 situation, how it handles the Opposition and how it manages the economy, among other things. The next six months, they say, are important.