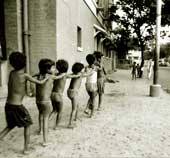 A number of English dictionaries still refuse to recognize the word. They are fighting a losing battle. It has respectable Latin roots. The verb, comparatorem, originally meant ‘to compare’. After an interval of time, it came to mean ‘to purchase or provide’. As the centuries progressed, its import underwent further mutations. By the late 18th century, comprador was a derivative noun in both Spanish and Portugese. Soon, a comprador was a familiar figure in China as well as in India; he was a native house-steward; a somewhat more elaborate description referred to him as a native servant employed as head of the native staff, and as agent, by European houses.

Yet another century rolled by, the comprador culture came to full bloom in Central and South America. The comprador was the native head-boy hand-picked by foreign exploiters. He would abide by whatever his foreign master said. The master’s words were law to him, the master’s interests were invariably considered by him as superseding all other interests. The interests of his own nation, or his own people, counted little with the comprador; it was the welfare of the foreign master which alone mattered. He was the master’s eye, he was the master’s ear. He lived for the master, he died for the master. A rich literature has grown in Latin America over the past hundred odd years around what is called dependent development and imperialist expansion via the agency of the compradors.

The tribe who were boot-lickers of the British — compradors par excellence — had got totally eclipsed in India amidst the fervour and frenzy of the freedom movement. Circumstances are however forcing a re-recognition of Arnold Toynbee: history is a victim of the virus of circularity. The country is creeping back to a comprador climate. The new generation of information technology barons, spawned by the surge of outsourcing, is determined to transform the land into impeccable comprador territory. Barely a couple of years ago, one such baron, heading a major IT-related services producing unit located in Bangalore, was politely approached by some do-gooders for a financial contribution to ameliorate the environmental conditions in which the poor in the city lived. His response, as reported in the media, was breathtaking: don’t you know, 97.5 per cent of the profits of his firm come from the United States of America, Germany and Japan. He does not care much whether the poor in India lived or died. People like him are now the reigning deities in the country. There were few protests posted against this haughty, outrageous statement: the meek Indians have rapidly got to know which side their bread is buttered.

The same gentleman has recently added a new feather to his cap. The nation’s president was visiting the newly-opened campus of the baron’s IT unit at Mysore. It was a formal occasion; the standard convention on such occasions is that the national anthem is played on the arrival of the president. But no, the IT oligarch may, for form’s sake, suffer the president’s presence at the inaugural of his new unit; he would however not allow the nonsense of singing the national anthem. The reason proffered by him: the singing of our anthem could embarrass the foreign visitors attending the ceremony.

So there it is, we have finally attained the state of full comprador-hood. The IT sector and those who preside over it are held in awe by all and sundry. They are a law unto themselves. They can do whatever they choose to do, for they contribute in a major way to the recent spurt in the rate of growth of the country’s gross domestic product: it is export-led growth, the export of IT-related services is the predominant factor in this growth process. That an affluent middle class has emerged in India over the past decade or thereabouts is also largely because of the earnings from outsourcing activities on the part of the IT-based units. Those ruling the nation from the ramparts of New Delhi are beholden beyond measure to the IT bosses. Constituents of the affluent middle class could not agree more. The latest official decision — to exempt from taxation all earnings from the export of services — is evidence of the gratitude of those who matter for the wonders the IT sector has brought about.

The home minister of Karnataka is evidently still innocent of the facts of life. He had the temerity to criticize the IT baron’s decision not to allow the national anthem to be played during the visit of the president; it was, the minister thought, an unpardonable offence. The minister runs the risk of losing his job. Those who can claim a major credit for the accrual of $180 billion of foreign exchange to the nation’s kitty and close to 10 per cent GDP growth have vastly superior clout. If the baron so wills, the chances are that the minister, give or take one week or two, will be packed off. He will have to pay the price for his lack of acquaintance with a comprador political system: the duty of not displeasing foreigners has precedence over ensuring the dignity of the office of the nation’s president. If the foreigners are alienated, private profits would shrink and GDP growth be adversely affected. This could not be allowed to happen.

For the rich have truly inherited the earth over here. The IT bosses will get away with insulting the country and its president. Similarly, spoilt brats from super rich families, returning home past midnight from wild drinking orgies, will run over with impunity decrepit specimens of humanity sleeping on sidewalks. The fault does not lie with the alcohol-sodden idlers. It lies with the lowly creatures who dare to try to have their nocturnal rest on pavements over which children of the high and mighty have the prerogative to mount their unsteadily-driven automobiles at the dead of night. The miserable lot, of course, sleep on the pavements because the State does not bother to provide them with proper shelter. But the State has better concerns. It has to take care of the high rate of GDP and the blessings such high growth bestow on the nation’s affluent, including the comprador barons.

All this is nonetheless a highly unstable situation. The poor are at the receiving end of the phenomenon of economic liberalization; the compradors, along with the rest of the all-powerful leaders of commerce and industry, have taken it for granted that today can be stretched to eternity. There is a problem though. Even if Marx and his teachings are considered crap, Toynbee’s theory of historical cycles could still play a dirty trick. The spread of IT has widely expanded the reach of telecommunications. The poor may be without jobs, without victuals, without clothing, without shelter; they are however not altogether unaware of the swinging parties the children of the rich participate in, at the end of which they jump at the wheel of luxury cars, press their unsteady feet on the accelerator, and finally mount on pavements to crush to death destitute men, women and children. The television channels routinely beam the atrocious news. One of these days, hordes of the unemployed and the unfed ones, whose kin are being run over in this manner in midnight sprees, will perhaps band together and do a surprise turn. What might take place is gory insurrection.