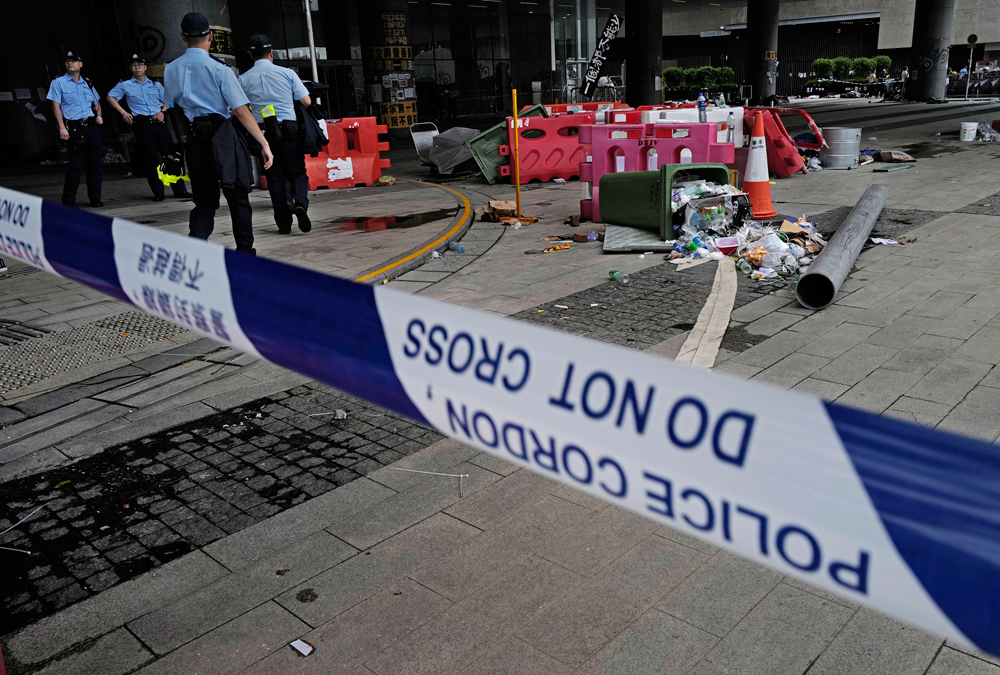 Police outside the Legislative Council building in Hong Kong a day after it was stormed by protesters. The territory’s chief executive, Carrie Lam, has been under enormous pressure because of her mishandling of the situation and for championing the extradition bill earlier
(AP Photo)
Harsh V. Pant   |   Published 12.07.19, 06:47 PM

History, it seems, is knocking at China’s doorstep and Beijing is getting panicky. The situation in Hong Kong is getting murkier and the Chinese communist party is behaving as if this is the 1960s when brute repression would have no consequences. That Xi Jinping’s China has no coherent strategy to deal with the situation is evident, but what is astonishing is the sheer incompetence with which the ground realities are being dealt with by the State machinery.

Hong Kong was never an internal matter for China. The system of governance ensures that the international community would have a stake in how the political system evolves in an autonomous territory of China that was once a British colony. The United Kingdom has entered the fray, albeit belatedly, warning China that it could face “serious consequences” over its treatment of protesters in Hong Kong. The foreign secretary, Jeremy Hunt, “condemned” the violence. The Chinese ambassador to the UK, Liu Xiaoming, retaliated by saying that relations between China and the UK had been “damaged” by Hunt’s comments while the Chinese foreign ministry lambasted Hunt for “fantasizing in the faded glory of British colonialism and [for being] obsessed with the bad habit of criticizing and lecturing on other countries’ affairs condescendingly.”

For the UK it is important to be seen to defend a treaty it signed with China guaranteeing Hong Kong’s freedoms and relative autonomy. In 1997, under the principle of ‘one country, two systems’, Hong Kong became part of China with an understanding that it would enjoy a high degree of autonomy, except in foreign and defence affairs for 50 years. This very principle is being challenged by the extradition law that would allow extradition from Hong Kong to mainland China. Thousands of Hongkongers have taken to the streets to protest against this proposed extradition bill which they fear would be used to target political dissidents. Protesters stormed and briefly occupied the city’s legislature and were driven out by a major police operation after they caused widespread damage to the building. The protesters are demanding a complete withdrawal of the extradition bill and an unconditional release of the arrested demonstrators.

Hong Kong’s chief executive, Carrie Lam, has been under enormous pressure because of her mishandling of the situation and for championing the bill earlier. Underlying the anger against the bill is a widespread anxiety about the future political trajectory of Hong Kong, even as Beijing relentlessly pursues an agenda of diluting Hong Kong’s civil liberties. Lam has suggested that the bill is “dead”, but protests continue with no let up in sight.

The Chinese president, Xi Jinping, has been clear about the need to increase China’s hold over Hong Kong. Beijing’s influence has grown to the point where discussions on political reforms have been marginalized. It is Beijing that decides who governs Hong Kong; only half of the seats in the legislature are filled by popular elections. It is unlikely that Beijing will buckle under the pressure. It is already moving to tackle the leadership of the protesters. China will make sure that the message goes out that challenging Beijing will entail significant costs. China has been repressive towards its minorities in Tibet and Xinjiang; there has been mass internment of ethnic Uighurs and Muslim minorities. Up to one million Uighurs and other Muslims are reportedly detained in Xinjiang, with extensive mass surveillance used to crack down on the inhabitants’ practice of Islam.

The repression has happened without any challenge from the international community, which is more worried about making money from the Chinese economy. Donald Trump has prioritized the trade dispute with China. Trump has apparently told Xi that the US would tone down its support for the anti-China protests in Hong Kong in exchange for re-opening the US-China trade talks. The European Union is busy fighting its internal demons. The UK is unlikely to sacrifice its wider relationship with Beijing and New Delhi had already burnt its fingers when it gave visas to some activists from Hong Kong for a democracy conference in Dharamsala.

Sadly, Hongkongers will have to fight their own battles against one of the mightiest nations of our time.

Hong Kong protests to continue after bill is 'dead'