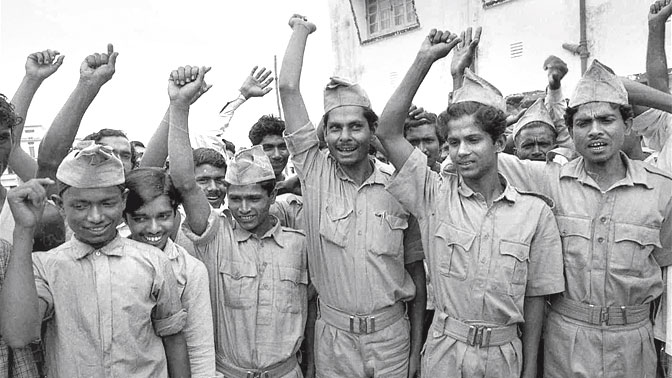 This month, we mark the fiftieth anniversary of the death of East Pakistan. Although freedom fighters in exile had announced a ‘Provisional Government of Bangladesh’ as early as April 1971, it was only on December 6 that the Government of India formally recognized its existence. On December 16, the East Pakistan army led by Lieutenant General A.A.K. Niazi surrendered to the Indian forces. A few weeks later, Sheikh Mujibur Rahman was released from jail and returned to Dhaka to assume the leadership of the new nation.

The birth of Bangladesh was widely celebrated in India, and from three distinct (if occasionally overlapping) perspectives. One group of celebrants consisted of the fervent political supporters (the term bhakt had not yet been invented in this context) of Prime Minister Indira Gandhi who saw it as a splendid vindication of her vision and courage, her sagacity and her statesmanship. A second group consisted of nationalists, who saw the victory over Pakistan as having wiped out painful memories of our humiliating military defeat at the hands of China in 1962.

However, there was also a third group of celebrants, who saw the victory of 1971 not so much in military as in ideological or even moral terms. These Indians believed that the birth of Bangladesh was the final repudiation of the two-nation theory promoted and brought to fruition by the founder of Pakistan, M.A. Jinnah. In August 1947, after Partition became an inevitability, both Gandhi and Jawaharlal Nehru put their political and personal capital into ensuring that whatever happened to the minorities across the border, in India the State and the ruling party would accord full citizenship rights to religious minorities. Even if its leaders could not rewind the clock, the Indian Republic would be an emphatic rejection of Jinnah’s claim that Hindus and Muslims could not live in partnership within the territorial boundaries of a single nation.

Let us call this third group of celebrants in 1971 the constitutional patriots. For these Indians working in the tradition of Gandhi and Nehru, it was not that Pakistan had lost, but that pluralism and secularism had won. Contrary to what Jinnah and his Muslim League had hoped, the religion of Islam failed to bind the eastern and western wings of Pakistan.

Notably, the Bengali identity that drove the founders of Bangladesh did not seek to discriminate on the basis of religion. To be sure, in the years since 1947, the Hindu minority in East Pakistan had faced harassment and its numbers had been reduced through migration to India. However, in 1971, Hindus still constituted more than 10 per cent of the population of East Pakistan (as against less than 2 per cent of the population of West Pakistan). And, unlike in West Pakistan, Hindus continued to be influential in the public life of East Pakistan. Several Hindus had played important roles in the Bangladesh freedom struggle. They included the army commanders, Jiban Kanai Das and Chitta Ranjan Dutta, and the veteran communist activist, Moni Singh.

The first Constitution of Bangladesh, drafted by the visionary lawyer, Kamal Hossain, proclaimed in 1972 that the new Republic would be guided by secularism, with all religions having equal rights. There would be no privileged place for Islam. As the legal scholar, S.C. Sen, wrote at the time, the new Constitution forbade the “making of any religion as the state religion”, prohibited the “use of religion for political purposes”, and provided for the “abolition of discrimination against any person on the grounds of religion”.

Sadly, after the assassination of Mujibur Rahman in 1975, there was a resurgence of Islamic fervour in the country. This was stoked by the military regime of General Ershad, and in an amendment of 1986, Islam was made the official State religion of Bangladesh. After the Awami League returned to power, its leaders have spoken on occasion of returning to the original Constitution, but have been unwilling or unable to do so.

In the fifty years since its founding, Bangladesh has made much progress in economic and social terms. With regard to such crucial indicators as human health, the percentage of women in the workforce, and the share of manufacturing in GDP, it is doing distinctly better than India. Last year, its per capita income was higher than India’s too. However, in political and religious terms, the country has not lived up to the vision of its founders. Minorities have continued to feel insecure, while there have been a series of attacks on writers and intellectuals.

That said, unlike in 1971, Indians today are not well-placed to preach the virtues of tolerance and pluralism to the Bangladeshis. For since Narendra Modi became prime minister in May 2014, the ruling party has aggressively promoted a Hindu majoritarian agenda. From the lynching of Mohammad Akhlaque in September 2015 to the violence against Christians in Karnataka in December 2021, the story of the Modi regime is one of repeated attacks on minorities in different parts of India. To her credit, Bangladesh’s prime minister, Sheikh Hasina Wajed, has publicly condemned the attacks on Hindus in her country. Our prime minister, however, has stayed resolutely silent on the persecution of minorities in his country.

After Amit Shah became home minister in May 2019, the stigmatization and humiliation of Muslims have become active ingredients in the policies of the Union government. This has been manifest in, among other things, the abolition of India’s only Muslim-majority state, Jammu and Kashmir, in the proposal for a National Register of Citizens, and in the Citizenship (Amendment) Act whose leaving out of Muslims from the list of potential refugees was calculated as well as spiteful.

While aggressively promoting the CAA and NRC, India’s home minister insinuated that Bangladesh was a nation of “termites”, a crude characterization that justly attracted the condemnation of that country’s intellectuals. In October 2019, Mesbah Kamal, a Professor of History at Dhaka University, said that “Shah’s implicit and repeated targeting of Muslims in India will have serious repercussions for Bangladesh’s minorities.” The historian noted that some maulanas in Bangladesh were repeatedly referring to Kashmir and the NRC in their sermons: “They have openly said that if Muslims are targeted in India, they will not spare the Hindus in Bangladesh.”

Fundamentalists of different faiths always feed off one another, but for the home minister of India to be playing this game is a dangerous thing indeed. In April 2021, in the lead up to the West Bengal elections, Shah suggested that Bangladesh could not feed its people, earning a rebuke from that country’s foreign minister.

The attempt to make the electoral contest in West Bengal a Hindu-Muslim affair failed. The Trinamul Congress was returned to power. Yet this has not deterred the leaders of the Bharatiya Janata Party. In a recent speech in Uttar Pradesh — a state due to go to the polls early next year — the home minister sought to stoke fear and insecurity among Hindus. The chief minister of UP has likewise made communal polarization key to his re-election campaign. Most recently, the prime minister himself presided over a boastful display of Hindu triumphalism in Varanasi.

Back in the 1940s, Jinnah and the Muslim League claimed that Indian Muslims needed a separate country of their own to live safely and with honour. Now, in the 2020s, the BJP of Modi and Shah believes that Hindus in India must continually assert their economic, political, and ideological dominance over Muslims. This places them strikingly at odds with the legacy of Gandhi and Nehru, who sought to build a nation where Hindus and Muslims could live together in friendship and solidarity.

The creation of Bangladesh in December 1971 was supposed to put an end to the two-nation theory. However, in one of history’s cruel ironies, fifty years later, a version of that theory is alive and flourishing in India, the very nation which had rejected the theory in the first place.