A tale of two martyrdoms in Kerala 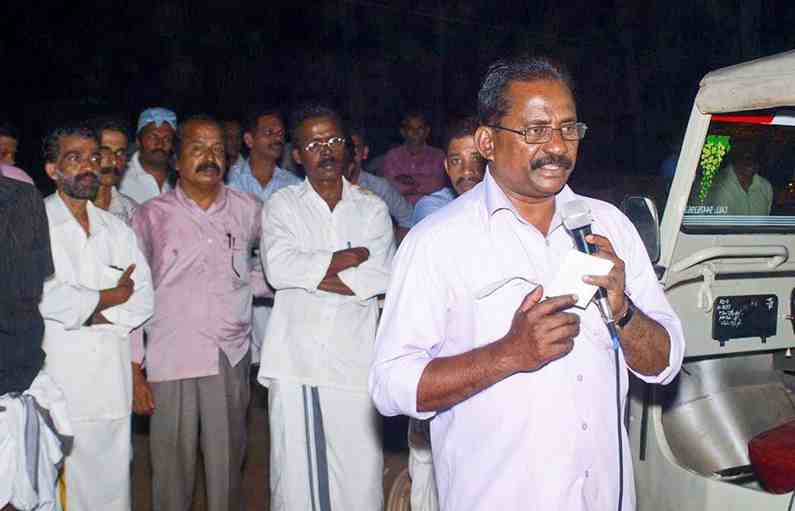 1948: Biryani Constable was called so because he needed to wolf down three to four plates daily to do justice to his girth that struck fear in suspects in interrogation cells.

In the summer of 1948, Biryani Constable was said to have slammed the butt of a rifle into the head of Mandodi Kannan, a communist leader in Onchiyam in Vadakara in north Kerala. Rivulets of blood ran down Kannan’s face as he fell but he dipped a finger in the puddle, lifted himself up and scrawled a sickle and hammer on the grimy wall. Kannan succumbed to his injuries a few days later.

2012: The motorbike rider was heading south and had reached Vallikkadu when an Innova going north swerved right, switched lanes and rammed into the two-wheeler. The rider was thrown off the bike, and a group armed with swords leapt out of the MUV. The first blow was struck with such monstrous might that the blade sliced through the face and smashed the skull. Death must have been instantaneous. Yet, the other sword-wielders went to work with unspeakable barbarity. By the time they finished, the body of T.P. Chandrasekharan bore 51 cuts, it would be revealed later.  Chandrasekharan was a communist who had fallen out with the Communist Party of India (Marxist) after a perception gained ground that the party was drifting away from communism.

Mandodi Kannan was among the 10 communists and peasants killed by Malabar Special Police, aided by a militia linked to the Congress, in 1948 in what came to be known as the Onchiyam massacre, a defining event in Indian communist history. April 30 in Onchiyam in Kozhikode district is to Indian communism what May 1 in Chicago is to the international labour movement.

The Communist Party’s Calcutta thesis (which adopted the insurrection line that was eventually abandoned) had been passed a few days earlier and word had reached the then Congress government that some of the representatives who attended the session in Bengal would be convening in Onchiyam to brief the other communists. An operation was planned to capture the leaders, and a posse of the brutal MSP was sent to Onchiyam before dawn on April 30, 1948. Onchiyam was already in tumult because poor farmers and labourers, oppressed and exploited for generations, had begun to organise themselves, infuriating the rich landlords and ruthless hoarders.

But no big fish was in sight for the MSP to catch. So, the police party did what some of their successors do even now: barged into hutments and thrashed everyone. The MSP also picked up a father and son, handcuffed them and proceeded back.

Onchiyam was just waking up. Soon, word spread over home-made megaphones: Choyi and Kanaran are being taken away. Carrying flaming torches and chanting, a crowd followed the police, swelling all the while and taking a life of its own. At some point, the police posse lost its nerve and opened fire. Eight people were killed. Kannan and another person surrendered a few days later to stop the wave of police brutality on the poor households. It was then that the unbending Kannan was tortured and killed.

I had heard about the martyrdom when I grew up in Kerala but I had neither tried to understand the significance nor been to the spot where the martyrs were gunned down. Largely unaware of the seminal contributions of Mandodi Kannan, I had sleep-walked through the customary pursuits of education cocooned in the Macaulay matrix, admission in an “apolitical” college “unsullied” by strikes and eventual departure from Kerala in search of a “steady job”.

A fortnight ago, I went to Onchiyam without any clear purpose. If possible, I wanted to meet K.K. Rema, the widow of Chandrasekharan. If not, I would have met a friend and returned.

Rema is an MLA now, having survived a state-wide pro-CPI(M) wave in the assembly elections last year to pull off an improbable victory from Vadakara, a Left stronghold. Rema did have the support of the Opposition Congress-led front but that does not mean that the erstwhile leader of the Students’ Federation of India is a blind follower of the Congress’s policies.

I called a friend in Onchiyam who said Rema would definitely be at home that evening and he agreed to seek an appointment for me. Only when I reached Onchiyam after a two-hour drive from Kozhikode city did I realise why my friend was certain about Rema’s whereabouts. It also gave a measure of the depth of my shameful ignorance. That day — a Saturday — was April 30 — the 74th anniversary of the Onchiyam martyrdom. No communist from Onchiyam can stay away from there on April 30. And I was stupid enough to ask if Rema would be in Onchiyam.

Winding my way through picturesque Onchiyam, it was hard to miss the red flags and the crescendo of revolutionary songs. Another telltale sign was unmistakable: the CPI(M) was organising its own commemoration, so was the Revolutionary Marxist Party of India, born from the merger of the party Chandrasekharan founded with other parties with similar views.

Just as I was not familiar with the Onchiyam martyrdom, I had not known much about Chandrasekharan when he was alive. But his initials — “TP” — are a household name in Kerala now — the unintended consequence of the brutality that the CPI(M) leadership has been trying to disown.

TP was killed not just because he broke away from the CPI(M), which is not unheard of. But TP did something that the Party could watch only in disbelief: a large chunk of the cadres in Onchiyam and its surroundings went with him and his party won the local elections.

I spent around 20 minutes in Rema’s house, marked by an engaging conversation with her father, Comrade K.K. Madhavan, who shared with me anecdotes about the heyday of the peasant movement in Bengal.

Soon, it was time for Rema to leave for the commemoration meeting. She assumed that my friend and I would go to the venue and, while leaving, said she would see me there. Although it was not in our original plan, we went there and positioned ourselves at a crossroads, waiting for the RMPI march to go past us.

The rally was impressive — both in turnout and in enthusiasm (an unforgettable highlight was a remarkable marching band made up of women, whose proud trainer made my day later in the evening by asking me if he can take a picture with me). Back home, some of my friends would ask me whose event was more impressive — the CPI(M)’s or the RMPI’s? I cannot say because I did not go to the event organised by the Left Front. Bragging rights or brownie points are not what I took away from that evening in Onchiyam.

As I stood at the crossroads, I marvelled at the zeal of the participants and I wondered what made them remember and honour the martyrs who fell 74 years ago. Later that night, V.K. Suresh, journalist, martial arts specialist and author of an upcoming book on the martyrdom — with the economic but evocative title, Onchiyam — would tell me how social reform initiatives in the latter half of the 19th century had made the soil of Vadakara fertile for egalitarian movements.

One such reformer was Vagbhatanandan with whose endorsement the Uralungal Labour Contract Co-operative Society, India’s oldest worker cooperative, was established in Kozhikode in 1925. Another influencer was Sree Narayana Guru, the great reformer who battled the caste-ridden shibboleths of Kerala and fought for social equality.

If the social reformers prepared the ground, the foundations for a politically aware society were laid by the upheaval in Europe in the early years of the 20th century and by education nurtured by Christian missionaries in the 19th century. Into this fertile field were thrown seeds such as the Congress Socialist Party, setting the stage for the germination of communist ideology.

The presence of workers rolling bidis, spinning coir and cultivating paddy facilitated movements that fulfilled the urge to organise and build what would now have been described as a “woke” generation that keenly followed — and hotly debated — the geopolitical alignments that marked the Second World War. (Mandodi Kannan was at the forefront of a campaign to create awareness against Imperial Japan which had many sympathisers in India because the Axis forces were battling the British.)

THE FINAL PART OF THE ARTICLE WILL APPEAR ON MAY 14