While the Maharashtra government has actively promoted the Ajanta caves, the sandstone Bagh caves, surprisingly, do not appear on the regular tourist map of the Madhya Pradesh govt, unlike the way it promotes 'mystical Mandu in the rains' 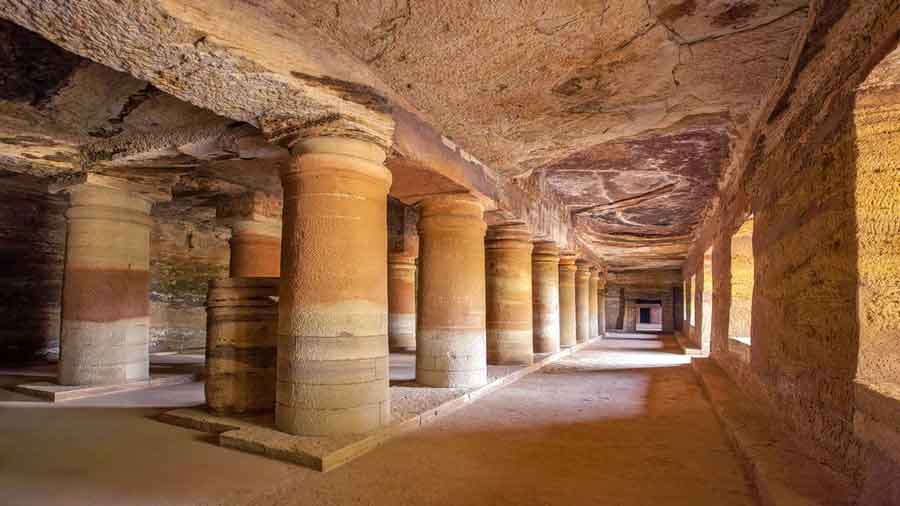 In 2018, the centenary year of Kala Bhavana at Visva-Bharati, the wall with murals by Nandalal Bose was restored by the authorities. But the real story behind the legendary artist’s interest in such frescoes is tucked away on the deserted southern slopes of the Vindhyas in Madhya Pradesh. The state may have been catapulted into the limelight last weekend with the prime minister, Narendra Modi, celebrating his birthday by releasing cheetahs there, but it has much more to offer than forests.

For instance, we were on a trip to Mandu a few days ago when we decided to visit the Bagh caves, leading from a nondescript village of the same name nearly 130 kilometres away, in Dhar district. Few tourists venture in that direction, fewer still have heard of this priceless fifth-century legacy that the Archaeological Survey of India is endeavouring to preserve since 1992. Benodbehari Mukherjee had recounted that in 1921, “when the country was in the throes of the national movement,” Nandalal Bose had visited the Bagh caves in the company of Asit Kumar Haldar and Surendranath Kar, to copy the Buddhist frescoes in this group of nine rock-cut monuments, akin to the better-known Ajanta caves.

In the inhospitable terrain, far from civilisation (even today) the trio spent nearly six months, painstakingly replicating the intricate rock art. According to Mukherjee, Bose was immensely enthused by this venture. “He sent back to his students little notes of information and advice…and some of them began to experiment with mural techniques. After his return, he decorated the walls of a room in the old library building in Santiniketan, floor to ceiling, with floral scrolls derived from those in Ajanta and Bagh. Thereafter his interest in doing murals using various indigenous techniques increased progressively.”

It took us nearly three hours along expressways and then a sharp turn left along village roads to reach Bagh village. Locals said the name originated from tigers, which had once inhabited the foothills, but it was possibly named after Baghani, the stream that runs alongside. Today the settlement thrives on a cottage industry of hand-printed fabric— predictably called ‘Bagh print’ — using traditional dyes and wooden blocks. The caves themselves (five of the nine have survived) bear distinct signs of a Buddhist vihara, now interspersed with the ASI’s presence: hewn rocks and pillars strewn around, vestiges of the salvage operation that cannot remotely match the original. According to Devendra Richhariya, a senior ASI official, “The seepage of water is posing a threat and damaging the existing wall art.” The friezes on the columns have also been intricately done, but like elsewhere across the country’s heritage sites, preservation efforts are unable to replicate the centuries-old workmanship.

The entry ticket to such a treasure trove of ancient art is 25 rupees. Given the low footfall, the revenue generated must be a pittance. We found a smattering of tourists, mainly local ones out on a picnic, with a guide singing old Bollywood songs in the hollow caverns to great effect. Most of the larger and more spectacular paintings have been shifted to a museum alongside. The missing custodian had to be summoned to facilitate our entry. The lighting is almost non-existent and with barely any of the information (that artefacts of this dimension demand) visible.

While the Maharashtra government has actively promoted the Ajanta caves, the sandstone Bagh caves, surprisingly, do not appear on the regular tourist map of the Madhya Pradesh government, unlike the way it promotes “mystical Mandu in the rains”. Would a visit by a celebrity unleash the resultant publicity for this treasure trove with a historical legacy that is going to seed? Does this destination appeal for your next birthday, Mr Prime Minister?