Together with the politics of hatred, the state has rejected cultural and social coercion and risen up against insults heaped on a woman leader by powerful male politicians 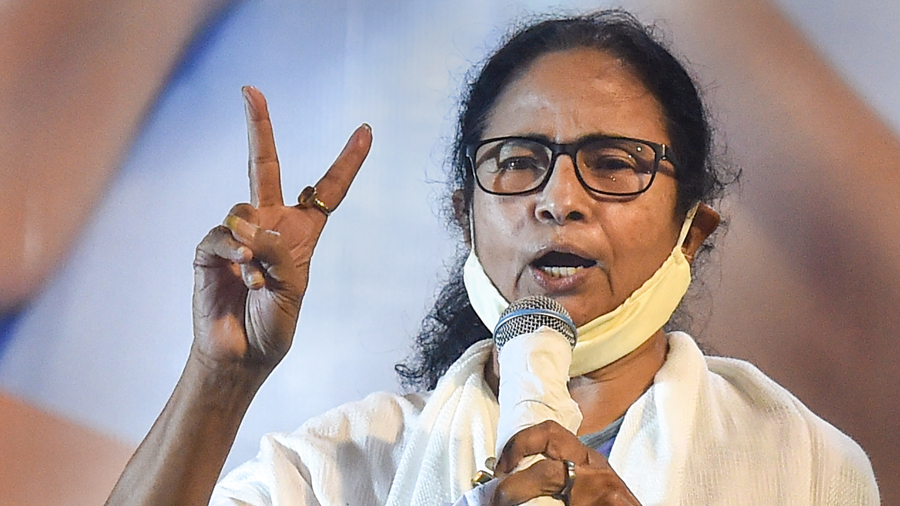 TMC supremo and West Bengal Chief Minister Mamata Banerjee during interaction with media after trends show her partys win in the State Assembly Election 2021, in Kolkata, Sunday, May 2, 2021.
PTI
The Editorial Board   |   Published 03.05.21, 12:52 AM

West Bengal does not accept the politics of communal hatred. That is the single, focused message from an indisputable majority of its voters. The scale of the Trinamul Congress’s victory was not predicted by any exit poll, which means that the intensity of Bengal’s rejection of the Bharatiya Janata Party was never gauged. The deafening propaganda of the BJP and the spectacle of its biggest leaders and star campaigners, including the prime minister, the Union home minister and the Uttar Pradesh chief minister, holding repeated electoral rallies in different parts of the state may have blinded observers to indicators of the people’s attitude. The BJP has certainly increased its number of assembly seats from three, although it has not crossed 100. The other rival of the TMC, the Communist Party of India (Marxist), teamed up with the Congress and the Indian Secular Front, has given up space to the BJP, which has obviously drawn to itself the anti-incumbency vote together with the support it has built in the state.

The TMC victory is all the more remarkable because the BJP had turned all its big guns on it, welcoming into its fold its leaders from Mukul Roy to Suvendu Adhikari, and ensuring through the Election Commission an eight-phase election in the middle of a pandemic. It did not even condemn the alleged gunning down of four voters by the Central Industrial Security Forces at Sitalkuchi. Against its muscle, money and use of State machinery, the TMC fought with Mamata Banerjee in the lead, campaigning from a wheelchair till the end. The battle in Nandigram, where she had pitted herself against her former aide without standing from a ‘safe’ seat, seemed symbolic of the drama that the elections had become in West Bengal. Together with the politics of hatred, the state has rejected cultural and social coercion and risen up against insults heaped on a woman leader by powerful male politicians. Now the BJP must decide if the seats it has gained are an adequate return for the attentions showered on it by Narendra Modi and Amit Shah. Will they be accountable for the devastating pandemic to which the long-drawn out elections contributed? Meanwhile, West Bengal has shown the country that it is possible to build ramparts against hatred.