Has Congress gone back to the Ray and Salwa Judum models? 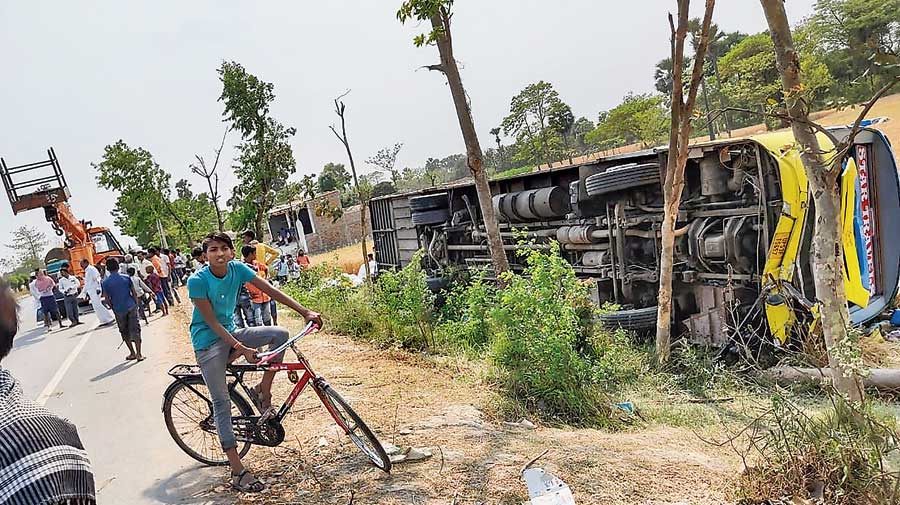 A truck that overturned under the impact of an explosion allegedly carried out by Maoists at a village in Bijapur, Chhattisgarh.
PTI file photo
Shubhranshu Choudhary   |     |   Published 26.04.21, 12:57 AM

After the recent Maoist attack on security forces in Bijapur, Chhattisgarh, in which 22 jawans were killed, Sonia Gandhi paid homage to the martyrs and Rahul Gandhi alleged it to be a “poorly designed and incompetently executed operation”. Law and order is a state subject. Central forces deployed in a state work under the command of the state government. Or is that not the case in Chhattisgarh? If it was indeed a “poorly designed and incompetently executed” operation, we need some more answers from the ‘high command’.

The Naxal movement started in 1967 when the Congress was in power in West Bengal. The movement was brutally terminated by the then chief minister, Siddhartha Shankar Ray, by 1972. However, the Maoists started their movement in Andhra Pradesh soon after, and spread wings in Madhya Pradesh. Indira Gandhi was back in power in 1980 and had asked the then Madhya Pradesh chief minister, Arjun Singh, whether he would like to follow the ‘Ray model’. Indira Gandhi had apparently agreed to the suggestion that Singh work on a special ‘Bastar development plan’ with a promise of a moratorium on big industry and mining that was expected to dissuade the tribals from the Maoists. Ramchandra Singh Deo, Chhattisgarh’s first finance minister, was given the responsibility to formulate the plan. Unfortunately, by the time the plan was ready, Indira Gandhi was assassinated and Singh had been sent to Punjab as governor. In the early 1990s, when the Bharatiya Janata Party came to power in Madhya Pradesh, it started a ‘Jan Jagran Abhiyan (People’s Awareness Programme)’ with help from local leaders of the Communist Party of India and the Congress to finish the Maoists. The brutalities inflicted by the police-led Jan Jagran forced large numbers of tribal people to join the Maoists for the first time.

The same Jan Jagran policy, now renamed Salwa Judum, was followed by the BJP after coming to power in Chhattisgarh in 2003. This time, the leadership was given to a Congress leader called Mahendra Karma. The Salwa Judum killed many and was later declared unconstitutional by the Supreme Court. As per numerous intelligence reports, the Salwa Judum increased the power of the Maoists manyfold. And, as in the 1990s, it was not possible for anyone to remain non-partisan because of the Salwa Judum’s violence. Many more tribals joined the Maoist movement. Mahendra Karma lost his life along with other state Congress leaders in a retaliatory Maoist attack in 2013.

A Congress government in Andhra Pradesh had tried to start a dialogue with the Maoists in 2004 but it failed. We need to learn from those mistakes. There was another attempt at dialogue in 2010 but the Maoists alleged that their emissary was killed by the then Congress government at the Centre. So in 2018, when the Congress manifesto promised ‘a policy and serious efforts for solving Maoists problem through talks’ there was hope. The BJP manifesto continued to talk about ‘Naxal-mukt’ Chhattisgarh. So when the chief minister, Bhupesh Baghel, says on numerous occasions that he will talk ‘only to victims and not Maoists’, there are speculations about the policy being changed. The mediators sent by the state government to secure the release of the abducted commando told the media that it appears as if the Maoists want to talk. But Baghel insists that talks would only be possible if the Maoists reject violence and impose no conditions. This is a policy that has often been followed by governments and it has never worked. If the State makes the handover of weapons a precondition for talks, they will never take place. The handover of weapons should be the final objective of talks, not a precondition.

Recently, I visited Raipur University where I had learned my first lessons on Maoism many years ago and one of my professors told me this story. He said, “My brother-in-law was posted in Bijapur (where the recent attack took place). To please him, I got him a ‘free’ transfer out of Bastar but to my surprise he bribed his way back to Bijapur. The reason my brother-in-law gave was that there is more money to be made while serving in Bastar. If Rs 100 is allocated to Bastar, Rs 30 goes to the Maoists which run their movement, Rs 30 goes to the party in power, and officers like him distribute Rs 30 amongst themselves. Bastar is a cash cow for all.”

The Maoists have been successful in Chhattisgarh because they are able to hide in the forest. They cannot win a direct battle with government forces. In plains areas like West Bengal, a Congress government finished them in just five years. Whereas in Bastar, they have been able to sustain themselves for more than 40 years. The Congress manifesto in 2018, promising to solve the Maoist problem, had generated enthusiasm. But does that promise of talks still hold? Or has Congress gone back to the Ray and Salwa Judum models? This question needs an urgent answer.