Advertisement
Home / Opinion / Guess which item is the No.1 seller? why, toilet paper of course

Guess which item is the No.1 seller? why, toilet paper of course 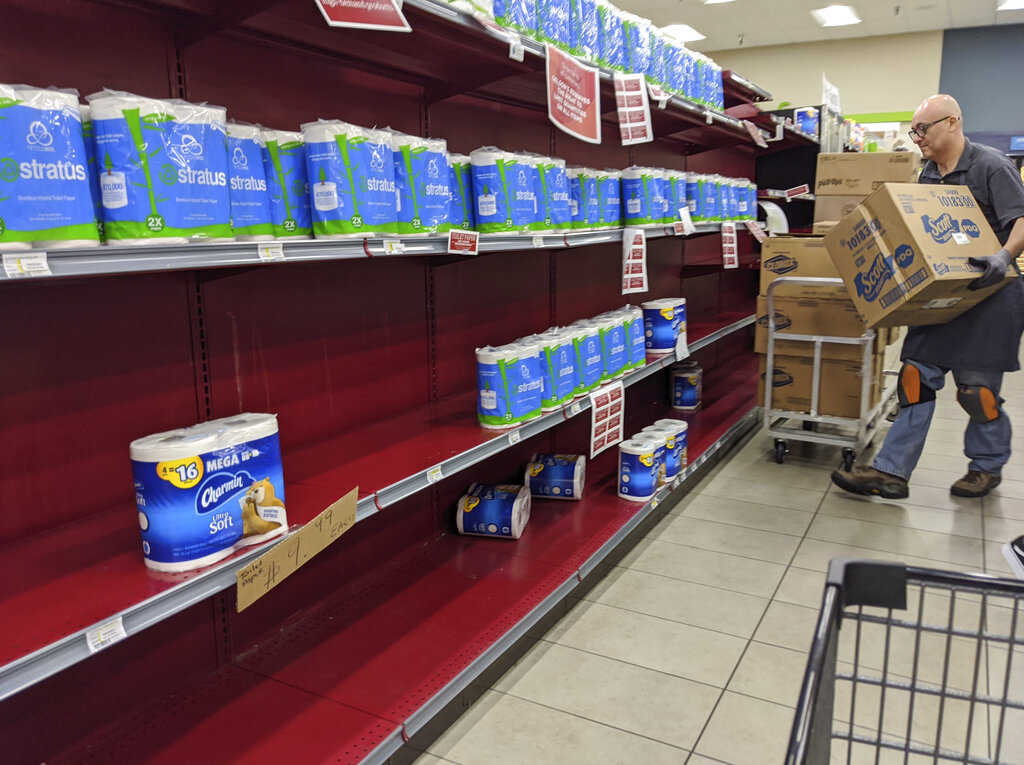 Amid the coronavirus-fuelled panic in the United States of America, toilet paper rolls are flying off the shelves faster than disinfectants and hand soap. Nearly every big supermarket chain in the US have bare shelves with a small black-and-white printout sign hastily stuck on stating that ‘items on this shelf are limited to 2 per person’. Amazon stock of rolls is either sold out or available at 4 rolls for $20.

The Maine-based company, Tissue Plus, actually launched its new toilet paper business just as news about the virus was starting to spread. It has had customers emailing in frantically. Most toilet paper producers are ramping up production and operations, but rolls are getting sold out faster than they can be replenished. In Maine, officials are investigating a convenience store accused of selling $10 rolls.

According to the market research firm Nielsen, toilet paper sales nationally jumped about 213 per cent in the week ending March 14, compared to the same period a year before, and sales were up 845 per cent last week compared to just the month before, according to NCSolutions, which aggregates retail purchase data. Typically, toilet paper is between the 20th and 30th highest-selling product in US groceries and drug stores. On March 11 and 12, it was the number one seller in overall dollars. This is the first time for big toilet paper brands to have stores and Amazon warehouses out of stock, but also a moment where consumers are forced to try out new, lesser known brands, having an impact on the long-term way of how millions of Americans do their shopping.

Most US states by now have issued mandatory ‘stay at home’ policies, which means that by March 25, over 40 per cent of the US population was urged to stay at home, and step out only for essential needs. This unprecedented moment in time has shed light on the economic disparity and stratification of American society and how marginalized groups are affected during a pandemic. People who have disabilities, are homeless, unemployed or underemployed, without access to healthcare or health insurance, without childcare and paid leave will face significant obstacles. Ironically, the unemployment office created multiple job openings to process claims after over two million Americans stated unemployment due to the impact of the virus.

While staying at home for some may be a happy respite, it can be dangerous for those in unsafe home environments and abusive relationships. An executive from the National Domestic Violence Hotline informed the New York Times that there are fewer calls to their hotline per day now, probably because it is harder for victims to call as they are likely confined at home with their abusers.

When it comes to testing, being rich and high-profile certainly helps. While doctors and patients are facing a shortage of testing kits, the list of tested celebrities and influencers — including the NBA team — seems to be growing, eliciting accusations of elitism. The US president, Donald Trump, was asked at a news conference whether “the well-connected go to the front of the line”.

While most restaurants are limited to take-out and delivery only, other ‘non-essential’ businesses are completely closed down. The Senate is trying to pass a bill that will guarantee private-sector loans to companies through the Small Business Administration, but many businesses feel that it will not be enough for them to stay afloat. As an employee of a trash and recycling company operating in 10 US markets myself, I have encountered over 200 businesses calling in last week alone discussing the need to dramatically reduce their waste pickups to cut costs.

A CNBC analysis projects that the coronavirus could lead to 15,000 permanent retail store closures and eradicate three million jobs from the US economy by the end of summer. A Goldman Sachs survey of over 1,500 small business owners found that more than 50 per cent of them said they did not think they could continue operating their businesses for more than three months amid the current conditions. The National Restaurant Association estimates the US restaurant industry could lose $225 billion from closures.

Typically, a non-essential business refers to anything but supermarkets, pharmacies and gas stations. In California, the governor confirmed that producing, selling and buying marijuana all qualify as ‘essential’. Orders online across the country increased by 230 per cent in the week before as consumers stocked up on marijuana to survive their coronavirus confinement.

While unemployment numbers surge, millions of Americans are also afforded the opportunity to work from home during this time. Research by CNBC indicates that in a five-day work week, working remotely for two to three days is the most productive. That gives the employee two to three days of meetings, collaboration and interaction, with the opportunity to just focus on the work for the other half of the week. Oracle, Apple, Google and Amazon were among the first large companies to establish the work from home policy. Charter Communications, one of the largest phone and internet providers in the US, was criticized by engineers for not allowing staff to work from home in spite of efforts from other companies to combat Covid-19.

Telecommunication softwares and applications are also spreading like wildfire, enabling workers to video chat and message while working remotely. Stock prices are reflecting this trend as well. Zoom, Slack and Microsoft, which all offer tools to make it easier to work remotely, are treading carefully for fear of being perceived as trying to take advantage of the situation.