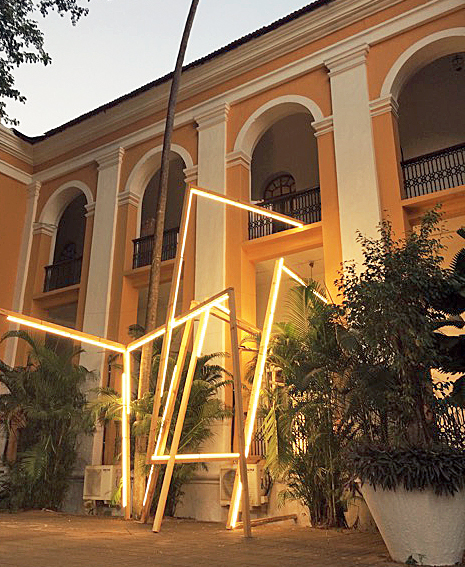 If you’re not a local, then perhaps the way to think about a festival such as this is as an additional attraction to a Goa holiday which is partly centred around the state’s capital city.
L.Gupta
Ruchir Joshi   |   Published 25.12.18, 03:05 AM

In the second half of December, the air conditioners in Panjim are still on, full blast. Late in the evening, the breeze comes off the river and makes the paper star lanterns twist a bit but otherwise Xmas decorations notwithstanding, we could be in Calcutta in late March. Panjim — or ‘Ponzhio’ as the locals pronounce it — is the site of the annual Serendipity Arts Festival, which is designed to take advantage of the normally clement pre-Christmas weather, except this year the troops of outsiders who’ve come in for the festival are literally mixing sweat with the locals, though not in the way the phrase was originally meant to convey. At the opening party which takes place at the Goa Institute of Management in nearby Ribandar, there is an abrasive atmosphere, with locals in their vehicles honking in irritation as the cars and vans stickered with SAF livery disgorge the people attending the party.

Inside the Institute of Management (which is cheek by jowl with the offices of the Goa Police cybercrime unit), the party is on full blast. Dhruv Sangari, one of Delhi’s most talented young qawwals, is unfurling Amir Khusrau; on the dance area in front of the stage, a lone child is circling in her raqs, the whisky and gin are flowing and for food we have twelve different kinds of biryani from all over the country curated by Marut Sikka. From the next day, the variety of art offerings is even more varied. The SAF comprises multiple cultural programmes, all running concurrently for a week. At GIM are Young Subcontinent, Out of Turn — an archive of performance arts interspersed with live acts, a sound museum and several other visual arts exhibitions, talks and performances. At the PWD compound is an arts centre celebrating 175 years of Panjim with art by Goans. At the ESG auditorium, there are specially curated film screenings. At the Adil Shah Palace are three exhibitions, two of photography, and one about the sacred in daily Indian life. Further down the riverside are massive photographs by Gigi Scaria, altered cityscapes put up to complicate the view of the river and casino boats, pictures which are a huge hit with the wandering public as selfie backdrops. Still further down, in the Children’s Park is a recreation of a Goan marketplace, with food stalls, a stage for live music and crafts workshops; beyond this comes the Kala Academy, which has evening performances and the DB ground with a massive stage flanked by food and drink stalls which holds live performances every evening. Coming back towards the centre of town, there is the Old Goa Medical College with a show of international contemporary art. Around the GMC are other events to do with performance, food, beer-brewing and spice-mixing. Back near the huge new bridge that’s being built, a ferry leaves every evening to take an audience on a short spin down the Mandovi and its confluence with the sea while classical musicians perform in a series curated by Shubha Mudgal.

Looking at the programme, there seems to be all kinds of offering for people with different tastes; you clearly can’t (and shouldn’t) try and take in too much, perhaps concentrating on designing your own festival from all the different components. There are also the pleasures of Panjim qua Ponzhio, the walks, the many great eateries, the bars, some with live music, and then just the lanes of the old town through which you can wander. Then, beyond the dusty Kurukshetra of the massive bridge and flyover being built, with their warring cranes and bulldozers, lies all of the rest of Goa, the sea, the beaches, the shacks and the winding maze of the roads leading inland. If you’re not a local, then perhaps the way to think about a festival such as this is as an additional attraction to a Goa holiday which is partly centred around the state’s capital city.

All this is not to say that the festival itself isn’t worth a trip by itself. At the Adil Shah, you could lose yourself in a mass of retrieved old images curated by Rahaab Allana and his team, Ephemeral: New Futures for Passing Images, where different photographic archives move under and over each other like tectonic plates of silver gelatin: two portrait photographers who’ve photographed all sorts of customers including the early hippies who came to India, a record of the Dalit movement in Nepal, from NID, the National Institute of Design, a cluster of collections put together by students, marking and examining photographic practices in the 50s, 60s and 70s, and two contemporary presentations, one by Sukanya Ghosh reworking old photos she finds in her family home in Calcutta and the other by Uzma Mohsin who uses an RTI query to put together applications for protest marches at Jantar Mantar in Delhi and then layers photographs on to the forms filled out by various groups and movements across the last few decades. Slipping sideways into another set of rooms you could see a beautifully compiled show, The Sacred Everyday, curated by Ranjit Hoskote, which looks at the syncretic weave of different religions in imagery and objects of everyday use. In another set of rooms, Ravi Agarwal has curated photo-related works under the title, Intimate Documents.

My Colour on Your Plate, Subodh Gupta’s show of contemporary art, takes over the old rooms at former Goa Medical College. Walking through the different rooms, it is first hard to see the show as anything but a series of one artist-one room kind of show, but then, at the end, you can see the connection among Paul McCarthy’s irreverent faux-porn videos of actors heaving at each other wearing George Bush, Dick Cheney and Queen Elizabeth masks, Phyllida Barlow’s small, layered and encrusted sculptures and the minimalism of the videos in Sophie Calle’s Voir la Mer. The quirky yet rigorous use of found footage to imagine the formation of different languages in Daphné Le Sergent’s Geopolitics of Oblivion then connects with the last work that Harun Farocki made (with his partner, Antje Ehmann), Labour in a Single Shot, and to Hemali Bhuta’s collecting of the swept rubbish material from the Medical College site itself and then distilling that labour and its ‘product’ into dyed cloth and textured tiles as part of her three-room piece.

Of course SAF was not without its problems and controversies. The festival took place under the looming presence of the huge vehicle bridge crossing the Mandovi and the extended tentacles of the flyover that stretch in either direction from it for several kilometres. What is Goa being turned into? Who will land at the new airport that’s being planned? Who will use this gargantuan automobile aqueduct?

In a different area, the MeToo upheavals continued to bite into this festival and the Kochi Biennale taking place a few hundred kilometres to the south. Riyas Komu removed himself from Kochi and also from the show he curated here, showcasing younger subcontinental artists. On the eve of the SAF opening, Subodh Gupta too ‘stepped back’ following allegations of sexual misconduct on a social media platform. Someone — not from the festival — put a tape across Gupta’s name at the sign at Goa Medical College which was then later removed. Quite rightly, the visiting artists and local associates acknowledged Gupta’s vision and effort in putting together the My Colour on Your Plate show; the accusations and the possibility of them being substantiated should in no way allow anyone to erase Gupta’s contribution; and acknowledging this in no way absolves or gives Gupta a ‘free pass’ from whatever proof he may have to answer.

Trying to imagine a similar or comparable festival in Calcutta brings up visions of the organizational chaos, the programming khichudi, the controversies all being multiplied tenfold. Yet, and yet, you cannot get away from the fact that as an arts festival in its third edition, Serendipity was hugely successful. You could see that people from all classes and all ages were being drawn in. The town was transformed and energized in a way that is very different from the usual Christmas and New Year turbo-tourist traffic jam. Eyes were opened to new things, fun was had, memories were created. Politically, no punches were pulled: from the performances of Maya Krishna Rao to the syncretic challenges posed by Ranjit Hoskote to the brilliantly anarchic anti-authoritarianism of Paul McCarthy’s ribald videos, it all played out to an engaged viewership and audience.

“The beaches are not working out this year,” a Goa resident told me, “or, at least, the swimming is not safe. Something in the sea has sent a lot of jellyfish right up to the sands. They sting dangerously and you have to be careful going into the water.” Well, given what we’re inflicting on the seas that’s no surprise, but at least we know that there can be some consolation for the blockage to the usual suspects of sun, sea and sand. Perhaps we in Calcutta need not worry about what could go wrong with a festival of this scale and order and just leap in.