There is an urgent need to preserve Brookside cottage and other sites where Tagore, Netaji and Swami Vivekananda lived when they spent some weeks in Shillong 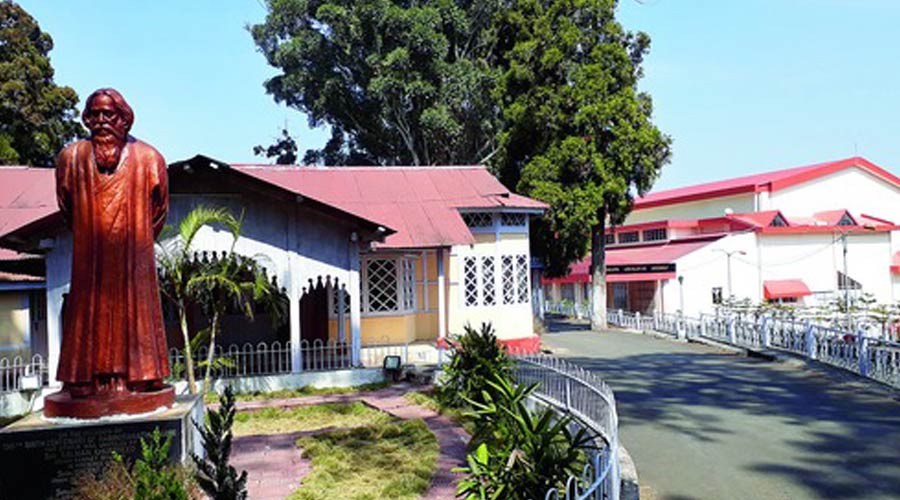 A slice of Santiniketan played out in the distant Scotland of the East last week. On Doljatra, the residents of Shillong celebrated Basanta Utsav at Brookside, the bungalow where Rabindranath Tagore had lived during his first visit to the abode of clouds in 1919.

The Meghalaya minister for arts and culture, Sanbor Shullai, told me that a museum dedicated to Tagore was on the anvil in a proposed Rabindra Bhavan which will be housed in the legislative assembly building on the Brookside campus. “I expect the art and culture ministry of the Government of India to sanction the Rs 13 crore project in April,” he said.

I had ventured into this stately Brookside cottage during Meghalaya’s last assembly elections in 2018. It wasn’t difficult to track because the assembly building is behind a giant copper-coloured statue of Tagore. That the “temporary” assembly is still housed there four years on speaks volumes about the pace of development. Across the gate from Brookside lives the Tagore researcher, Malabika Bisharad, who has been ceaselessly campaigning to restore the heritage of this stately Assamese-style bungalow and others in which Tagore, Netaji Subhas Chandra Bose and Swami Vivekananda lived when they spent some weeks in Shillong.

Bisharad acquired permission from the deputy commissioner of East Khasi Hills and the Meghalaya department of arts and culture to celebrate Basanta Utsav near Tagore’s statue amid the pines and eucalyptus, with the Umshyrpi rivulet (Tagore’s Nirjhorini in Shesher Kobita) murmuring alongside. While Debi Goswami of Sarada Samiti lit the inaugural lamp, students, social workers, Tagore admirers and even tourists joined in the programme, replete with the Nobel laureate’s songs and poems. A poem on Tagore by Usha Saxena of Ludhiana was read. However, the director of the arts and culture department, who was the chief guest, was conspicuous by her absence.

Bisharad’s quest to protect Brookside is propelled by the fact that the state government owns it (it was acquired on September 19, 1989 from Kamal Chandra Dey and B.R. Roy Chowdhury of Calcutta for Rs 55,415.09 by the arts and culture department). In a letter dated August 8, 2014, the government had said it would establish a Centre for Creativity and a Tagore memorial there.

The uphill task of getting the heritage tag for Brookside as well as the other houses had Bisharad petitioning the Rashtrapati Bhavan. The then president, Pranab Mukherjee, had even flown to Shillong to inspect the site. Two weeks ago, she appealed to Shullai, seeking his help to preserve the bungalows where Tagore, Netaji and Vivekananda had lived. Swami Vivekananda stayed at a house in Batti Bazar, Laban, in 1901. It is now under litigation. In recent years, monks of the Ramakrishna Mission and a smattering of Vivekananda’s followers have gathered there on his birth anniversary to pay tribute at a plaque amid the ruins.

According to Bisharad, “Netaji stayed at Kelsall Lodge at Oakland during his first and second visits to Shillong in 1927. The house is now with BSNL. On his third visit, Netaji stayed at Bidhan Bhawan at Laban in June 1929. The government of Meghalaya owns it. On his fourth visit in September 1938, Netaji stayed at Ashley Hall at Oakland. The place is under private ownership.”

The Meghalaya governor, Satya Pal Malik, wrote to the chief minister, Conrad Sangma, requesting him to “kindly spare one of the buildings as heritage site after the memories of Netaji Subhas Chandra Bose.” My emails to the governor and calls to the chief minister for an update went unanswered.

Fifty years of statehood, 75 years of India’s independence, initiatives like the ongoing Azadi Ka Amrit Mahotsav which Prime Minister Narendra Modi calls a “festival of awakening”: when, one wonders, will we awaken to the glorious heritage linked to Tagore, Netaji and Vivekananda?