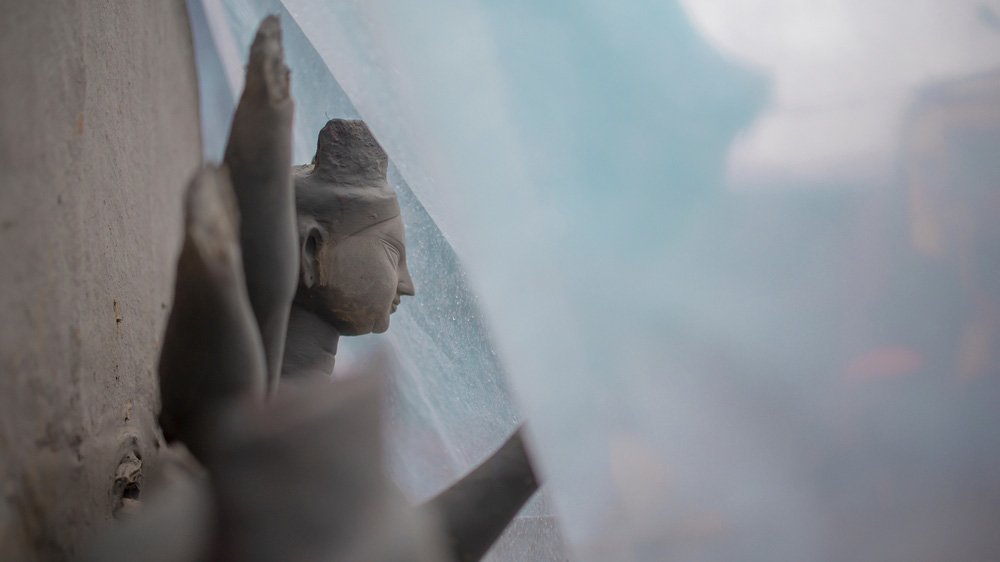 These days the kitchen sink is where I meditate. Just as I think that I have finished washing all the dishes, I realize that I have not been able to scrape all the tea leaves off the bottom of the teapot, and some of the ones that I had scraped out have got stuck at the sink-hole.

So I switch on one more arm to clean the teapot, calmly, mindfully, and another to pick out each tea leaf, slowly, from the sink strainer. With another arm I fill the bottles at the water filter, watching over them fondly. With yet another I feed the cats. With the next, though, I quickly scratch my head. With yet another hand I place an order online for organic cold-pressed virgin coconut oil, and, as always, wonder about the description. The next hand books a cooking gas cylinder. With another I google the coal crisis, because this one is really going to hit us hard, if it happens. Is it a crisis or is it a shortage? What really happens if we do not have electricity? And if we do not have Internet? Which will be worse? We do not know, because both are now equally unimaginable. Then the bell rings, and I want to shoot out another arm to receive the packet from the delivery agent, but I cannot. I have run out of hands. You are sanctioned only ten at a time. What is good enough for a goddess should be good enough for you.

And I need one more, preferably two. I have to log into an online meeting that’s on. It is a blessing that you can be virtually present when you are absent, never mind the semantic confusion about “virtual”.

So I throw caution to the wind and, despite the rules, summon ten more arms. One arm goes out to fetch the packet from him, two others help me to log in, another brushes my hair, as I will switch on the video for the first few minutes, yet another brandishes the khunti and almost assassinates the fish pieces gyrating in the jhol, yet another mops the floor. The mop, which comes with a handle, looks like a hairy Cyclops, as a friend says. But it is a friendly creature to me. The remaining arms spray disinfectants. The virus can be anywhere. One more arm was required, again, to snatch the iPad away from the teenager who is practising rebellion on it and yet another to kill the mosquito that never stops buzzing around my head. Little demon. Raktabeej.

Sometimes I wonder if I had ten arms only to wield mosquito bats. I would then just kill, kill, kill. Meditatively.

The pandemic has blurred the lines between work and home. Work is home. I feel extremely grateful to be able to work from the security of my home, but now I also do not know when I am not working. Which is why those extra arms. And I want more. I feel tired also from staring at the screen the whole day.

But I realize one thing. The ten arms of the Mother Goddess appear to have a special significance to someone like me, untrained in the ways of the gods.

Here I am also reminded of A.K. Ramanujan’s essay, “Repetition in the Mahabharata”, where he reinterprets “dharma” not as a moral principle, but as an idea that illuminates life itself and gives it a structure through repetition. In the epic, a few themes are repeated endlessly through its stories, and they exist simultaneously and point to a grand design. “It is not dharma or right conduct that the Mahabharata seems to teach, but the ‘subtle’ nature of dharma — its infinite subtlety, its incalculable calculus of consequences, its endless delicacy.” The goddess’s ten arms seem to indicate to me another ‘subtle nature’ underlying things. By holding up a conch shell as she rides a lion and pierces the heart of a demon with her trident, she is saying that all the ten weapons and objects she is holding up are equal and simultaneous. She is upholding everything. Durga is someone who goes to the most difficult places.

I get a glimpse of that at the kitchen sink. And I do not consider cleaning it any less purifying than reading Ramanujan. Man made that difference.