From here to hereafter 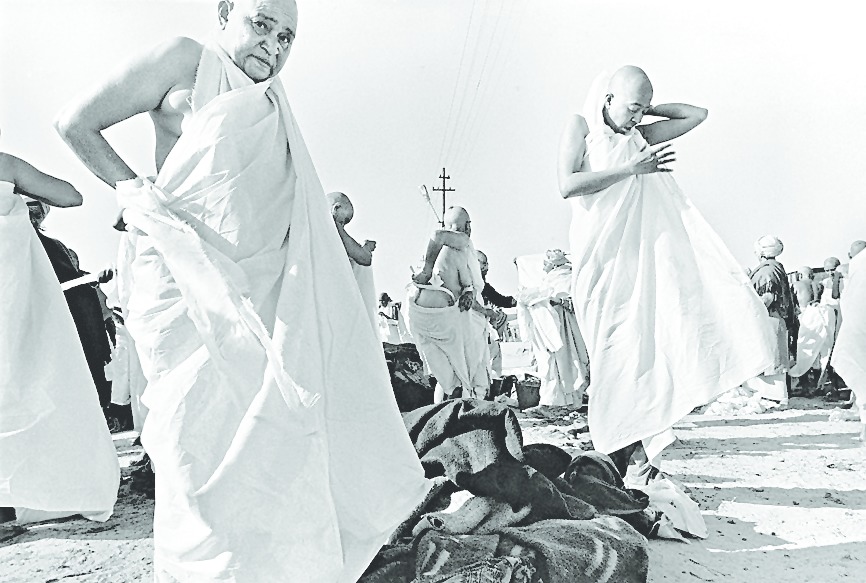 An exhibition like Jeevanchakra (Akar Prakar, Jan 18 to Feb 17), which was curated by Latika Gupta and has a certain agenda, rarely brings out the best in artists. For it is difficult for those who have a mind of their own to conform. This was a Medicine Corner exhibition presented by Wellcome Collection and the British Council, and this is what the curator has to say: "Jeevanchakra presents the experiences of those involved in the transit of the body into or out of the tangible world: healers, midwives, surgeons or family caregivers."

While this is all very fine, and the artists were well known practitioners, some of the works seemed to get into a twist as they tried to comply with the demands of the concept behind the largish show covering 10 artists. But first some of the outstanding works that resonated beyond the perimeters of the agenda.

One of the most powerful if somewhat unsettling set of black-and-white photographs was the documentation of childbirth by Gauri Gill. This happened in a remote Rajasthan village, and the conditions in which the baby was delivered by a dai or midwife on the dirt floor were in stark contrast with childbirths in city hospitals, even the worst-case types, where nothing is visible. Here there is actually a shot of the woman parting her legs (albeit under her ghagra) as the infant emerges. It may not have been the safest birthing processes, but it is certainly the most natural, as the photographer herself notes.

Equally powerful is the set of eight silver gelatin prints of Sheba Chhachhi's work, "Initiation Chronicle". As the titled suggests, Chhachhi documents how some women discard their earlier identity to wear a new one - an ascetic renamed daughter of the river, for the process happens on the banks of a river. Shorn of the markers of their former identity, they are reborn as powerful beings symbolized by their white wraps, column-like figures and bald heads, perhaps indicating their freedom from gender (picture). However, Chhachhi's more elaborate "photo-sculpture", with its text written over a photograph of an old woman and "miscellaneous objects", is a bit of a mishmash without the bite of the photographs.

Sooni Taraporevala's photographs (some black and white) of the Zoroastrian 19th-century sky burial hillside in Mumbai are on a more gentle note. The vultures have disappeared but the site is still used by Parsis for cremations and burials, as the choice may be. A colour shot shows the crowded hillside where this tower of silence is situated, and bodies being brought in for last rites. There is the pallbearer with the dog and the bearded patriarch who helped families facing problems get clearance. It is a touching, human document that never slips into sentimentality.

Paula Sengupta, originally a printmaker, presented a set of "found" embroidered handkerchiefs that made references to the time when she had to nurse her dying mother. Hence the motif of the cucumber vine that the gardener tended on the square pieces of cloth. Perhaps a trifle too weak an analogy for so agonizing an experience.

Sonia Khurana goes to the other extreme in her video, "Missing Womb", for which she recorded her mother's hysterectomy surgery. Is this the aesthetics of literal-mindedness?

Nilima Sheikh's two paintings of an ailing man going through the daily rituals of cleansing with the help of caregivers, and a cadaver being prepared for the last rites are straightforward enough. Unlike many of Arpita Singh's paintings of ageing bodies of women, the one that was displayed was of a monumental female figure with a full-grown woman inside her, indicating a bodily function beyond the capacity of men.

And this brings us to Mithu Sen's diptych of two men - one pregnant and the other excreting. Sen's drawings are usually terse and spare, and occasionally the effect can be chilling. They need no explanation. This time, the quote from a rather obscure essay notwithstanding, Sen's exercise seems rather futile. Srinivasa Prasad's marks on the walls of a bare room with ashes suggest cartography or whatever comes to the mind of the viewer. They are interesting enough. But how on earth are viewers to know that these marks were made with the ashes of unclaimed bodies from a crematorium unless the curator had taken the trouble to do so? And how many footnotes would Gargi Raina's work need? This is a contemporary trend that can be quite frustrating. Why should the works of artists need the buttress of a curator's or artist's statement?