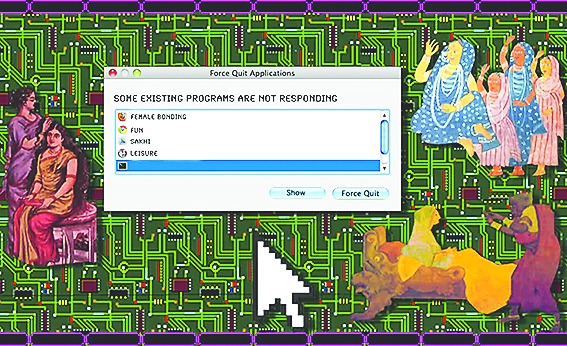 The cultural history archive of the Centre for Studies in Social Sciences is so vast and varied (comprising mainly 19th- and 20th-century visual genres) that several successful exhibitions have been held earlier using material from it. The recent one CSSS held in collaboration with the India Foundation for the Arts at its Jadunath Bhavan Museum and Resource Centre titled, Accessing Archives: An Exhibition of Three Exploratory Projects, was different for two - Afrah Shafiq and Vishwajyoti Ghosh - of the three young participants were artists. The third, Sujaan Mukherjee, had mostly devised his own material, and had a far more simple object in mind than the other two. He took viewers back to the Calcutta of yore through a stereoscope, original postcards, and a board game based on the city's map.

Afrah Shafiq's complex and innovative video, was, as its title, Sultana's Dream, indicated, a mix of fantasy and history of women's relationship with the printed word. It is all about a young woman dreaming, quite like Alice of Wonderland fame, about a world free of those redundancies - what else but men - where women, left to their own devices, often blossom into bluestockings. Thomas Rowlandson's caricature of these ladies of learning takes a more critical view, but he would be branded a misogynist. Like Ghosh, Shafiq dips into the archive and picks up disparate images - old prints, matchbox labels, garish decorations on trucks, Kalighat pats and the almost forgotten Dharmanarayan Dasgupta - to serve her own end, context be damned (picture). Which is a fine attitude, and her choice was mostly perfect. So was the animation. The gently breathing cat was real cool. The gambolling ladies not always. The high seriousness of tone in the section on erudite women who threw caution to the winds was at variance with the earlier lightness of touch.

Ghosh's is a revisionist view of Nripendra Kr Bose's safe sex manual titled Jaubaner Jaduipuri (How to remain young and keep yourself in control), published by Katyayani Book Stall in 1936. Such manuals were a dime a dozen in those days. This particular one, like the others of its ilk, had a didactic and high moral and pseudo-scientific tone that sounds brain-dead in a comical way today. These sermons on long-distance marriages, abstinence, consent, compassion (foreplay allowed) and a section on Bengali women of the time (higher education not recommended) are juxtaposed with visuals from the archive that hold this tract to ridicule. The "installations" on Eros in everyday life were quite as dreary as everyday life. The ideation by both artists was exciting, but what one saw was not always so. Sujaan Mukherjee's forays into old Calcutta ( Chance Directed) provided an interesting counterpoint.