Advertisement
Home / Opinion / Messi, as a sportsman, must accept that losing is a part of sport

Messi, as a sportsman, must accept that losing is a part of sport 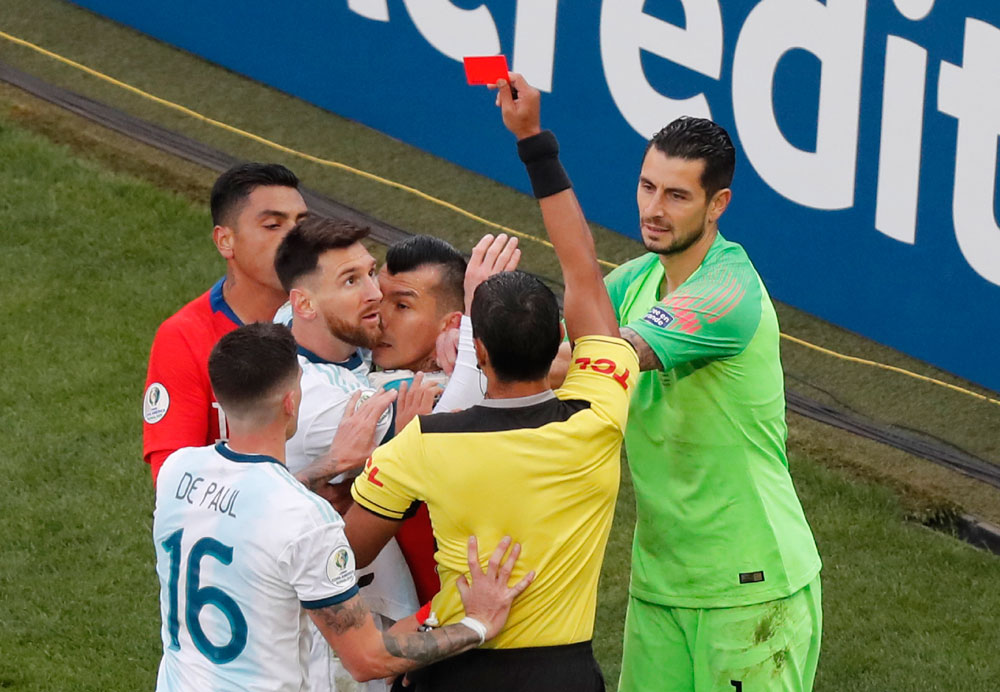 Sir — The football star, Lionel Messi, claimed that Copa America had been fixed to favour the host country, Brazil. Messi had also accused the South American Football Confederation of corruption after he was sent off in the third-place playoff match against Chile.

Messi is a great player and a voice of authority. He has enjoyed considerable success at the club level but has not achieved much for his country. A sportsman must accept that losing is a part of sport. It is shameful that the Argentinian superstar refused to collect the bronze medal after Argentina had beaten Chile.

Sir — Once upon a time, Parliament had great statesmen who questioned the policies of the ruling party that went against the people. Now there is a lady, a first-timer in Parliament, who seems to have landed a punch on the face of the government (“A punch in the eye”, July 9). The country needs parliamentarians like Mahua Moitra. Educated and outspoken, she can raise her voice for the people.

Alarmingly, young, educated Indians are not venturing into politics these days. Had they done so, the political system would have been better. Most politicians put themselves before the country. Worse, nothing concrete is being offered to the millions of unemployed youth. The standard of education in government schools and the quality of healthcare in public hospitals are poor as well. Private hospitals and educational institutions are robbing the common man. There is a water crisis in Chennai. It may spread to other cities in the future. This is the time when India needs good statesmen in Parliament, people like Moitra who can speak from their heart and also apply their mind.

Sir — Mahua Moitra’s maiden speech created a flutter. Ruchir Joshi has gone over the speech in detail. The point is Moitra’s speech was a punch in the eye of not only the Narendra Modi government but also the one led by Mamata Banerjee in Bengal. Moitra spoke of reclaiming the space that has been guaranteed to the Opposition. This is equally applicable to the Bengal assembly where Opposition leaders like Gouranga Chatterjee and Deblina Hembram have allegedly been assaulted. Her point about the subjugation and control of the mass media cannot be forgotten in the context of the circular by the state government which specifically listed the newspapers meant to be kept in government libraries. Moitra talked about dynastic politics. Is not the rise in stature of Abhishek Banerjee a case in point? She also referred to the repression of all dissent. In Bengal, Ambikesh Mahapatra had been jailed for circulating a cartoon of the chief minister. It is unfortunate that fascist forces are reigning both at the Centre and the state.

Sir — During her speech, Mahua Moitra quoted scholars like Maulana Azad and Laurence W. Britt. This speaks volumes of her rich educational background. It is a shame that members of the treasury bench tried to disrupt her speech. There is no doubt that in the coming days Moitra will play a remarkable role as a parliamentarian by speaking up against injustice.

Sir — It is encouraging that the parliamentarian, Mahua Moitra, seems to possess a thorough knowledge of history. Learning about the past is the best way to learn from our mistakes.

In the item, “Back in time”, in Eye on England, Amit Roy mentioned that the “very best of ‘East meets West’ art [was] represented by the likes of Atul Gaitonde...” The correct name should be Vasudeo S. Gaitonde.

As Lionel Messi turns 32, a fan ruminates on the ambivalent legacy of the football wizard