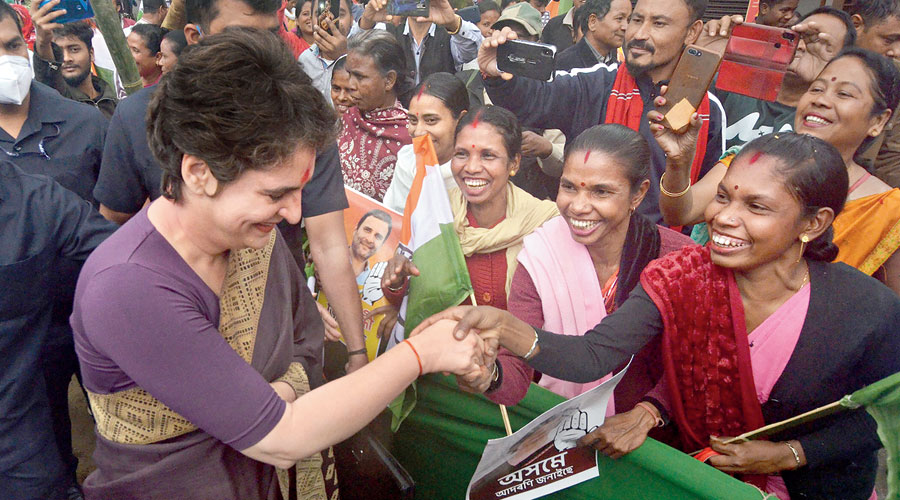 If more women contest the elections, it does not mean that they will all become legislators. But to go by the All India Congress Committee general secretary, Priyanka Gandhi Vadra, women’s political empowerment may have more to do with access. If they do not win this time, they will win the next time round, seems to be her hope regarding the decision that 40 per cent of the Congress tickets for the 2022 Uttar Pradesh assembly elections would be given to women. The point would be the larger number of women candidates in the running, something that parties such as the Biju Janata Dal or Trinamul Congress ensured in earlier elections, but seldom the ‘national’ parties. The emphasis on the possibility of women’s empowerment, however, is important in a state known for violence against women. Besides, elections in UP traditionally centre on issues of caste and community; gender is invisible. Ms Vadra’s announcement, alternatively called historic and hypocritical, draws attention to a competing site of conflict and inequality.

The issue of access is a pertinent one. A few remarkable women leaders apart, Indian women are scarce in decision-making positions in politics. Parliament at present has 14 per cent women members, and that is the highest percentage since Independence. This is in spite of the fact that the women’s reservation bill, ensuring for them 33 per cent of seats in Parliament and the assemblies, was passed in the Rajya Sabha in 2010 and is still pending in the Lok Sabha. Gender inequality in Indian society is quite frankly reflected in politicians’ reluctance to push through 33 per cent — far from 50 per cent — reservations for women in parliamentary and assembly seats. It is hardly surprising that the World Economic Forum’s Gender Gap Index 2021 ranks India at 140 among 156 countries in the representation of women in the political sphere. Yet the 33 per cent reservation has been carried through in local bodies or panchayati raj institutions. It suggests a desire to contain women’s empowerment at less visible levels. But it is undeniable that in the matter of approach and even local policies, the larger presence of women has made a difference in many places, often in spite of interference from men in the family. Such changes take time, but the first step is certainly access.