Strong nationalism, xenophobia, 'us versus them' rhetoric are some common features of ultra-right-wing authoritarianism 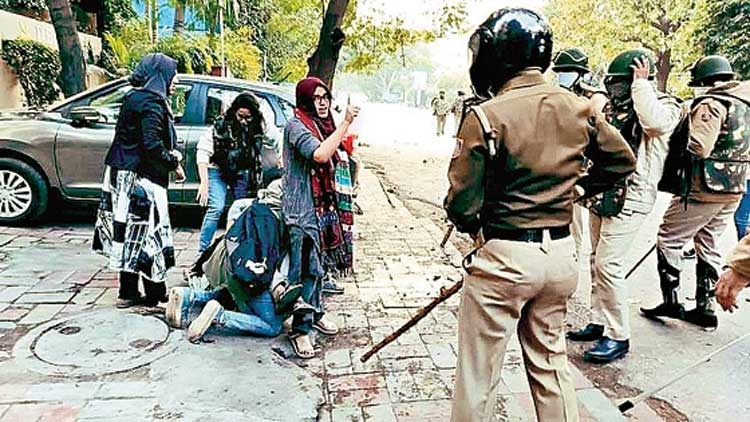 Why would a government with massive electoral support be so afraid of a few universities like Jawaharlal Nehru University, Jadavpur University or Jamia Millia Islamia?
(File photo)
Anup Sinha   |     |   Published 12.03.20, 06:51 PM

Ultra-right-wing authoritarianism, as political ideology, is not constructed from any specific world view of human thought and social behaviour. It is a variety of political practice that usually emerges out of a dysfunctional liberal capitalist State, marked by widespread corruption, extreme inequality, and growing economic distress. There are variants of such political practices given the context of the nation where it strikes roots. There are also a few core features that are common across nations. These features are well known: a very strong brand of nationalism along with xenophobia targeted at some ethnic or religious groups. There is the ‘us versus them’ political rhetoric that defines the enemy within the borders of the nation, against whom popular hatred and anger is fomented. The main idea of the nation is created from a mythical and glorious past, to which the nation must return for restoring lost strength and power. This brand of politics revolves round a strong and unrivalled leader who assumes messianic proportions for the purpose of leading the nation into glory. Independent institutions where the ruling order might be questioned or contested are gradually broken up or taken over. Typically, the bureaucracy, judiciary, law and order machinery, the electoral machinery, the central bank, the military, research institutions and universities, fall prey to political control. Culturally, there is a backlash against women and minorities since the concept of power is based on a majoritarian, patriarchal view of society. There is also a coordinated attack on intellectuals — scientists, academics, journalists, authors, public activists, and any politician of left-wing inclinations. This is how right-wing politics, which may well emerge from democratic electoral processes, evolves into a full- fledged fascist State.

Why are right-wing regimes so afraid of intellectuals and how do they usually stifle their voice and curb their influence on society? Intellectuals make two broad sets of contributions to society: they are supposed to generate new ideas and innovations which would help improve the extant state of affairs, and they are supposed to provide a critique of society and point out its weaknesses. These roles usually set the academic research agenda for both science and technology, as well as for the liberal arts and social sciences. Most academics learn to ask questions and not accept things as they are. Evidence is considered more important than strongly held beliefs. This is anathema for authoritarian regimes that build false historical constructs, to be peddled in ways so that they become strongly held beliefs of the ordinary people.

In such a strategy of propaganda, scientific clarity and the raising of uncomfortable questions become unwanted obstacles. Otherwise, in India, why would a government with massive electoral support be so afraid of a few universities like Jawaharlal Nehru University, Jadavpur University or Jamia Millia Islamia? Why would media houses that are mouthpieces of the ruling disposition refer to a few intellectuals as a ‘tukde-tukde’ gang? Why would students’ protests within a campus be referred to as riots, and the students as rioters? Why would raising slogans about freedom from poverty and hunger be tantamount to sedition and an act of treason? Why would some inconsequential social media posting lead to the arrest of an otherwise unknown college professor? Why is the ruling party so uncomfortable with a few women sitting in some public places and protesting the Citizenship (Amendment) Act? Why are selective arrests made of septuagenarian authors? Why are they shut up in jail? It reflects zero tolerance for any opposition to the ruling party in the realm of ideas.

This is true not only for contemporary India. In the United States of America, an extreme right-wing radio commentator had recently denounced what he called the four corners of deceit: government, academia, science and the media. It is clear that there are troubling signs of changes going on in all these four corners in many parts of the world. In Turkey, after an attempted coup against Erdogan in 2016, more than 5,000 deans and academics were dismissed from their posts in Turkish universities for being suspected of having pro-democratic and pro-leftist views. Most of them were very good scientists and researchers. It was an attack on the idea of higher education and the concept of expertise. In Hungary, Orbán, immediately after assuming power, condemned the schools as sites for liberal and Marxist indoctrination. A new core curriculum was introduced across Hungary which had a strong dose of topics that glorified Hungary’s mythical glorious past. All courses that do not provide opportunities for supporting the existing State are discredited — for instance all authoritarian regimes are against gender studies because it questions the basis of patriarchal societies. Such governments do not need experts. Adolf Hitler had remarked in Mein Kampf, that propaganda has to be pitched at the level of the least intellectual of individuals, and that the receptive ability of the masses is limited. Hence, all propaganda should be devoid of any debatable issues, and is to be presented in a few points brought out in the form of slogans to be repeated frequently, and with considerable oratorical skill. The right-wing nationalist does not believe in ideas and culture; he is supposed to believe in action consistent with the constructed myth about the nation’s past.

The fascist State has as one of its most important agendas, the task of turning myths into ‘facts’ that are widely believed. That is why the rewriting of history is so important: new ‘facts’ are incorporated in history textbooks and some existing chapters and events deleted. There are new heroes that are brought into the limelight, and many old ones discredited as anti-nationals. There are statements made that completely ignore or distort science. Such statements become more and more frequent in erecting new myths. The study of converting myths to facts is strongly encouraged. Recently, there was the official call for research grant proposals for studying the medicinal effects of cow dung and cow urine. What is the role of education then? The goal of general education in schools and universities is to instil national, racial or religious pride and culture based on the construction of the mythical past. The products of intellectual life — art, culture, civilization — all must necessarily be the creations of the motherland. In India, the founders of all that is good in society are Hindus. In Europe, all that is good in the world are the products of white men. In Trump’s US, the root cause of all problems of the nation can be reduced to the presence of non-white, non-Christian people.

Any vibrant democracy requires a rich and varied vocabulary for public dialogue. Both social reality and physical reality is complex. To understand this complexity, and to be able to make nuanced distinctions, a sophisticated discourse is required. The creation of this discourse is the work of intellectuals. Fascist politics debases and degrades this richness and replaces it by something simple, direct, and false, so that the complex reality can be masked. In many parts of the world universities and institutions of higher learning are under attack. They are degraded as hotbeds of Marxism and feminism. They are targeted and shamed with all the might of the propaganda machinery. In other cases, scientific and professional institutes, that do research and promote the generation of new ideas, are silently taken over by compliant academicians or bureaucrats who are close to the ruling regime. Then, in the name of restructuring, changes are brought in: people are humiliated, some punished, others browbeaten into compliance, the curriculum changed, research agendas altered and governance centralized. Gradually, in the entire education system, from kindergarten to university research, the control keeps growing. It is happening in many parts of the world. It is happening in India swiftly and silently.

Two democracies: The US and India