FAITH OF THE BIGOT

A jamboree in Lucknow Natures miracle 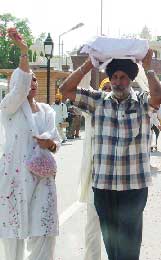 This year the RSS celebrates the birth centenary of Golwalkar, known to his followers as Guruji. He was the second-in-line after Hedgewar, who founded the organization in 1925 and was undoubtedly the principal formulator of its creed. Golwalkar remained its head and chief spokesman for 33 years, till he died in June 1973 at the age of 67. Amongst others paying homage to him will be leaders of the VHP, Bajrang Dal and the BJP. Not many of the tribute-payers will bother to read what Guruji had to say about India’s past and future, but will, nevertheless, vie with each other in praising him. No one can deny that the BJP and other right-wing Hindu parties acquired the status they enjoy today because of Guru Golwalkar. We owe it to ourselves to know more about him.

Madhav Sadashiv Golwalkar was born in 1906 at Ramtek near Nagpur in a Brahmin family. Brahminism forms an important aspect of his views, the leadership of the RSS and other fundamentalist Hindu parties. All have been Brahminically top-heavy. He was educated at the Benaras Hindu University, where he came under the influence of its founder, Pandit Madan Mohan Malaviya (Brahmin), who was nominally a member of the Congress, but effectively a right-wing Hindu. For a while, Golwalkar toyed with the idea of becoming a sanyasi scholar but was persuaded to take active part in societal problems. He joined the RSS in 1940 and was later nominated by Hedgewar as his successor and second sarsangchalak.

Golwalkar’s thinking was much influenced by Veer Savarkar (also a Brahmin). Both supported the caste system, asserting the superiority of the Brahmins over other castes and the need to keep their lineage free of contamination by inter-marriages with other castes. Both regarded Islam and Christianity non-Indian because they originated outside India, and believed that unless Muslims and Christians recognized India as their fatherland and holy land, they were to be treated as second class citizens. Both believed in the superiority of the Aryan race and approved of Adolf Hitler’s extermination of millions of Jews in gas chambers. Nevertheless, they supported Zionism and the Jewish state of Israel for no other reason but that it was forever waging wars against its Arab neighbours who were Muslims. Islamophobia became an integral part of Hindutva. L.K. Advani calls it a “noble concept”. He named the Port Blair airport after Savarkar. They have a life-size portrait of him in parliament. Najma Heptullah paid floral tribute to him; Mukhtar Abbas Naqvi and Shah Nawaz Hussain are active members of the BJP. We are never short of opportunists.

Returning to Golwalkar, I had read his Bunch of Thoughts earlier and put it out of my mind. I didn’t know of his We or Our Nationhood Defined. It was published in 1939 and carried by the RSS journal, Organiser. It has been re-published with the full text and a critique by Shamsul Islam by Pharos Press. It substantiates all of what I have said. Golwalkar’s concept of a nation is as follows: “…thus applying the modern understanding of ‘Nation’ to our present conditions, the conclusion is unquestionably forced upon us that in this country, Hindusthan, the Hindu Race with its Hindu Religion, Hindu Culture and Hindu Language (the natural family of Sanskrit and her offsprings) complete the Nation concept…”

Sanskrit was never the spoken language of the people who used regional languages, some of them like Tamil and Malayalam claim to be older than it. Sanskrit remained largely a monopoly of the Brahmins. There are other assertions of the Indian Aryan’s glorious past which are more fanciful than historically factual. To me they appear complete fabrications. You make your own judgment.

A jamboree in Lucknow

The BJP in its Lucknow session Planned to take out a marriage
procession
To wed a Sundari — the Delhi gaddi.
But what about the groom?
In the BJP grooms grow like
mushrooms
Though underage, its President
declared in rage
“Who else, but I and I alone?”
Last time Advani was Vajpayee’s
sarvala (bridegroom’s helper)
So this time he is ipso facto
deserving varmala
And Manohar’s murli sang a
different vani
“No! no! never! Never! Advani.”
Their ally Nitish Kumar
Being a born Bihar
Says “None else than Atal Bihari.”
But Vajpayee in this battle of aar
paar
Will definitely favour his langoti
yaar (bosom friend)

On the morning of February 6, I was sitting in my back garden watching birds. It had suddenly got warmer. The day before, I was looking for a sunny spot to bask in. This morning I was sitting under the shade of a mango tree. A few jasmines looked spectacular in their pristine gold. The peach tree, which is my favourite, was still flowerless. I was in the garden for three hours before I decided to turn in for my mid-day meal. I took a round of my garden. As I came to the peach tree, I was amazed to see over a dozen blossoms on different branches. It had performed the miracle in less than 80 minutes.