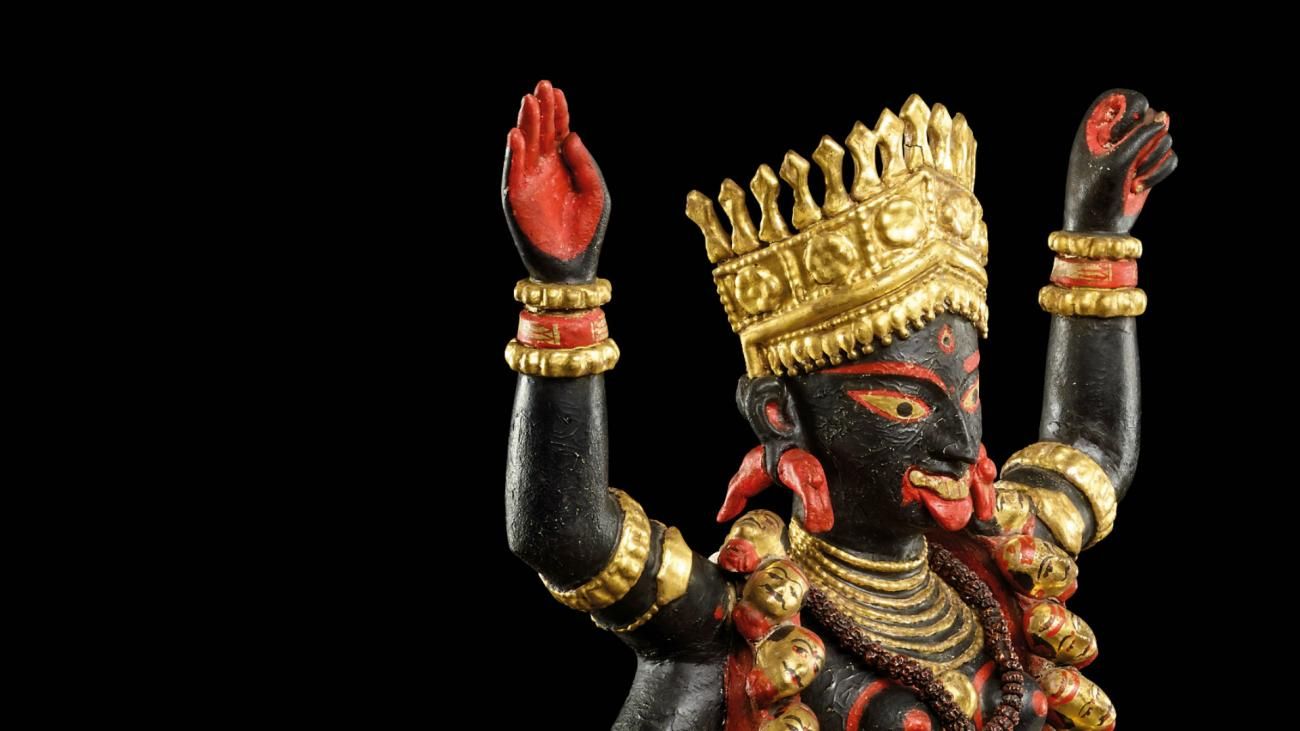 How the “Tantric goddess Kali” was deployed by freedom fighters in Bengal was highlighted by Imma Ramos, curator of a “landmark” exhibition at the British Museum, Tantra: enlightenment to revolution. Bringing focus to the exhibition’s representative image, she told us: “This figure of the Tantric Goddess Kali dates from the late 19th century and was made in Bengal, an early centre of Tantra as well as the nucleus of British rule. Indian revolutionaries in Bengal harnessed Kali’s radical potential, playing on British anxiety and paranoia. They reimagined her and other Tantric goddesses as figureheads of resistance, and symbols of an independent India rising up against the British. Kali was completely misunderstood by Christian missionaries and colonial officials. In 1917, Bipin Chandra Pal, a prominent activist, is quoted as describing Kali as a symbol that could ‘arouse the dormant energies of the nation and lead it on to realise its highest destiny’.” Ramos also displayed a three-metre-tall mixed media painting, Housewives with Steak Knives, by the British conceptual artist, Sutapa Biswas, which “challenges the stereotype of the submissive wife confined to the kitchen”.

Tantra, continued Ramos, “is in no way a marginal movement. It’s really very much a part of popular Hinduism and Buddhism today. Kali Puja, for example, is coming soon as is Durga Puja. These are big popular celebrations, particularly in Bengal.” She added that in the swinging sixties in Britain, “Tantra becomes associated with the free love movement. Mick Jagger had a logo designed for the Rolling Stones inspired by Kali, chosen to convey the band’s rebellious anti-establishment spirit.”

The lead sponsor for the exhibition is the Bagri Foundation, the trustees of which are Apurv and Alka Bagri and their daughters, Aditi and Amisha. The foundation was set up in 1990 by Apurv’s father, the late Lord Raj Kumar Bagri, who was born in Calcutta in 1930, began life at 15 as a filing clerk, came to London in 1959 and made history as the first Indian chairman of the London Metal Exchange.

The Baftas are the British equivalent of the Oscars and the organization that awards them — the British Academy of Film and Television Arts — has a new chairman: Krishnendu Majumdar. In order to achieve ‘greater diversity and a level playing field’, he has announced 120 far-reaching changes, including extending the membership to include more black and Asian people.

The Welsh-born Majumdar, who is 45 years old and himself an Emmy-winning producer and director, is the first non-white chairman of the Bafta and one of the youngest since it was set up in 1947 by David Lean and Laurence Olivier.

Majumdar feels he has “Bengali roots entwined with a Welsh upbringing” and “supports India in cricket, Wales in rugby”. His mother, Jharna, still lives in Wales. His father, Rupendra Kumar Majumdar, who arrived from Calcutta in 1962 and practised as a doctor with the National Health Service in South Wales for 40 years, passed away aged 86 in 2017.

In autumn 2018, Majumdar visited Calcutta to meet his relatives after having taken his father’s ashes to Varanasi. He tells me that the puja committee set up by his parents in Wales in 1973 “is still going strong”.

All at once, many of the editors I have worked for are in the news. Paul Dacre, the former editor of the Daily Mail, is being tipped as the next chairman of Ofcom, the broadcasting and media watchdog. He was apparently feared by his staff who addressed him as “The Editor”, never as Paul. He is viewed as a nightmare by the Left.

But the Paul I knew as deputy news editor, news editor, foreign editor and features editor was considerate and intelligent. But then the editor was Sir David English, whom I would bracket with Sir Harold Evans as “the greatest editor of all time”, an accolade given to the latter because of his campaigning stewardship of the Sunday Times from 1967 to 1981.

By the time I joined the Sunday Times, Andrew Neil had taken over. He has just announced he is leaving the BBC to become chairman of a new TV enterprise, GB News. The Left are also trying to stop Boris Johnson from appointing the recently ennobled Charles Moore, the former editor of the Sunday Telegraph and the Daily Telegraph, as the next chairman of the BBC. I found Charles to be a very civilized and liberal man. The one time he insisted I do something was to instruct me to cover Ramola Bachchan’s parties at her Hampstead home and report on the burgeoning Indian social scene in London.

People do change, of course, but I have generally found right-wing editors and newspapers are often the most “liberal” behind the scenes.

The Indian prime minister, Narendra Modi, ought to be flattered that he will not be overlooked in the new series of the satirical puppet show, Spitting Image, which returns to British TV today after an absence of 24 years. Donald Trump, Vladimir Putin, Boris Johnson, his adviser, Dominic Cummings, as well Kim Kardashian, Greta Thunberg and Meghan Markle will all be “mercilessly lampooned”.

In the heyday of Spitting Image, the former British prime minister, Margaret Thatcher, in a man’s suit, was shown bashing her cabinet ministers with her handbag. This time, with the new series, the programme makers are threatening “an iconic British satirical take on global events”.