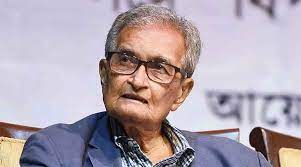 Even I can understand a simply written new book on economics which explains why gross domestic product is no longer the best way to measure how well a country is doing since it does not take into account other relevant factors, such as the environmental damage caused by a dam, for instance, or unpaid house work by women. But GDP: The World’s Most Powerful Formula and Why It Must Now Change by Ehsan Masood, a science journalist and senior editor at the journal, Nature, in London, also tells of the close friendship between Amartya Sen and the late Pakistani economist, Mahbub ul Haq. They first met as undergraduates at Cambridge in 1953 and collaborated in America in 1989 on the possible alternative concept of a “Human Development Index”.

Haq, born in Gurdaspur in 1934, was lucky to escape across the border into Pakistan during Partition. When Haq died prematurely in 1998, Sen delivered an emotional eulogy, calling his old friend “one of the most distinguished — and humane — practitioners of applied economics in the contemporary world”.

Masood, who was born in London to parents who moved from India to Pakistan in the 1940s before later settling in the United Kingdom, has dedicated his book to Haq. He should certainly submit his work for the 2021 Financial Times and McKinsey & Company’s Business Book of the Year Award.

Incidentally, I have been asked by the FT to encourage Indian publishers to submit books for this premier prize, which welcomes all entries. Previous winners include Liaquat Ahamed’s Lords of Finance: The Bankers Who Broke the World (2009); Raghuram Rajan’s Fault Lines: How Hidden Fractures Still Threaten the World Economy (2010); and Poor Economics: A Radical Rethinking of the Way to Fight Global Poverty, by (then Nobel Laureates to be), Abhijit Banerjee and Esther Duflo (2011).

Jonathan Glancey knows his way around Calcutta. As a journalist who has written about design and architecture for The Independent and The Guardian, he has often got into arguments with prickly Indians about the need to preserve the country’s dilapidated but beautiful heritage buildings. His father, Clifford George Alexander Glancey, was born in Calcutta in 1912 and came to England at 21, the same age at which Jonathan began discovering India through train travel. In 2011, he wrote Nagaland: A Journey to India’s Forgotten Frontier.

His latest lavishly illustrated book is about the evocative logos used by the numerous railway companies in America — Logomotive: Railroad Graphics and the American Dream — which he has co-authored with designer Ian Logan. Today, there are few cross-country passenger trains in the US but in the old days, people enjoyed the romance of travelling in the Orange Blossom Special or the Burlington Zephyrus. Freight trains remain and can be more than a mile in length.

Jonathan is mindful that Shashi Tharoor has accused the British of building the railways to facilitate getting loot out of India. But he points out there are Brits who have a passion for the steam locomotives of yesteryear. Jonathan recalls riding the footplate of a WP-class Pacific steam locomotive from Delhi to Chandigarh. And I remember Sir Mark Tully once telling me that if he didn’t get covered in soot on the footplate, “we would want our money back”. Mark now laments: “I am in Delhi, very frustrated, because I have not been allowed to get on a train for over a year and there is no sign of a change in that situation.”

Ian Jack was, in his time, regarded as the best writer on India. Jonathan Glancey says that it was Ian, when he was editor of the Independent on Sunday, who sent him off to India to write about train travel.

I got Ian to talk of the romance of the railways.

“There’s really no comparison between the railways of India and the USA,” says Ian. “Outside the commuter belts of the big cities and the line that links New York to Boston and Washington, passenger trains in America have become the reserve of prosperous old people, eccentrics and tourists. Famous lines and handsome stations have been abandoned; the onboard food isn’t great; fares are expensive and booking a journey can be troublesome. In India... trains are still a vivid part of rural and urban life. More and more people use them, even though the upper middle class has abandoned them in favour of domestic flights. My most recent journey was Mumbai to Delhi via the Western Ghats and Gwalior. The vegetarian dinner was warm, plentiful — second and third servings if you wanted them — and delicious, and I woke up trundling across the misty fields of UP. If you can spare the time, they remain the best way to go.”

India does not have the equivalent of Sir Alan Duncan which is perhaps just as well. He is very rude about parliamentary colleagues in his just published, In the Thick of It: The Private Diaries of a Minister. He calls Boris Johnson, “a buffoon, an international stain on our reputation, a selfish, ill-disciplined, shambolic, shameless clot”, while Priti Patel is dismissed as “a nothing person, a complete and utter nightmare, the Wicked Witch of Witham (her Essex constituency)”.

Prince Philip’s funeral today will see his coffin transported inside Windsor Castle not on a traditional gun carriage but in a converted Land Rover he designed himself. Jaguar Land Rover, which Ratan Tata bought in 2008 for $2.3 billion, drew attention to the Indian connection: “The Duke devoted his life to public service and made a significant contribution to UK manufacturing, engineering and design.”